Knowing how to say “different” in Japanese can be really helpful. Being able to differentiate between things is useful in many situations when visiting a foreign country. 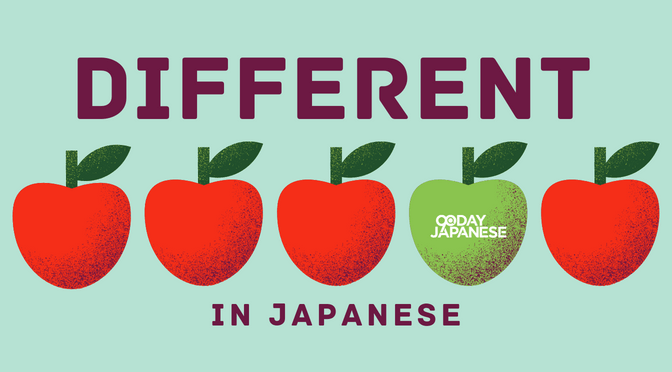 You may want to point out that something isn’t like it was before, doesn’t resemble its advertisement, or ask for another selection at a restaurant if you’ve ordered something by mistake. In the Japanese language, there are quite a few ways to point out differences, but luckily, some are simple and easy to memorize.

Read on as we teach you ways to express “different” with their Japanese translations.

How do you say “different” in Japanese?

Just like in English, if you’ve noticed a change, you can simply use the word “different” to point it out.

Below is an example of how it is used in a sentence.

Your hair is different, isn’t it?

“Imasu” is a common phrase that basically means “it is.” You can use this along with any adjective to describe something. Since many things in Japan will be different from what you’re used to at home, this phrase will be useful.

If you arrive in Tokyo and your hotel room doesn’t reflect the one you reserved, you could try to communicate that this way. But there are other slightly more complex ways to create a comparison as well.

How to differentiate between two things in the Japanese language

To mention both of the items you’re comparing, simply say one after the other and follow it with “to.”

This car is different from mine.

There are some sentences that don’t involve the “imasu” form. For these, you’ll use Chigau (ちがう) as your adjective.

Understanding when to use each form can be complicated, but at the beginning, you can use “chigaimasu” if you don’t know the term for the category of thing you’re describing and “chigau” if you do. But eventually, make it a practice to translate these words to also add more to your vocabulary.

Japanese and English are very different.

How to say that you want something different

Sometimes communication with salespeople or food service staff can go awry, and you’ll need to change your selection. For these situations, the term “another” is useful:

Do you have this shirt in another color?

You can even shorten this sentence by simply saying ほか の いろ が あります か? (Hoka no iro ga arimasu ka?) and the salesperson should understand what you want.

If you want to comment on the variety of items available, there’s a term for that in the Japanese language as well:

There are many different restaurants in this neighborhood.

Note that while the “iro” that means color sounds like that in “iroiro na,” they don’t mean the same thing. “Iroiro na” does not necessarily refer to an item’s color.

Similar words to watch out for

While “chigaimasu” is useful for explaining differences, there is another word that sounds very similar but has a different meaning:

“Machigau” is used when there has been an error. It’s easy to get this and “chigau” confused.

I made a mistake with my homework.

Make sure you understand the difference between “machigau” and “chigau.” Although they sound similar and can be used in some of the same situations, in other situations, it can lead to miscommunication if you’re merely trying to comment on how something has changed. Still, you accidentally say there’s been a mistake.

These subtle differences can be discouraging, but don’t worry. Making those mistakes is a part of the learning process!

Now you know how to use various Japanese words to express “different.” This way, you can give answers to questions about whether something is different or not.

If you’d like to know more words to use the term”different” with, here’s our free resource on Japanese nouns.