Do you like Japanese cuisine? Then, this lesson about food in Japanese is perfect for you! What kind of Japanese food item have you tried until now, and which one is familiar to you? Well, sushi is probably the most famous dish from Japan, and ramen noodles might be one of your favorites. 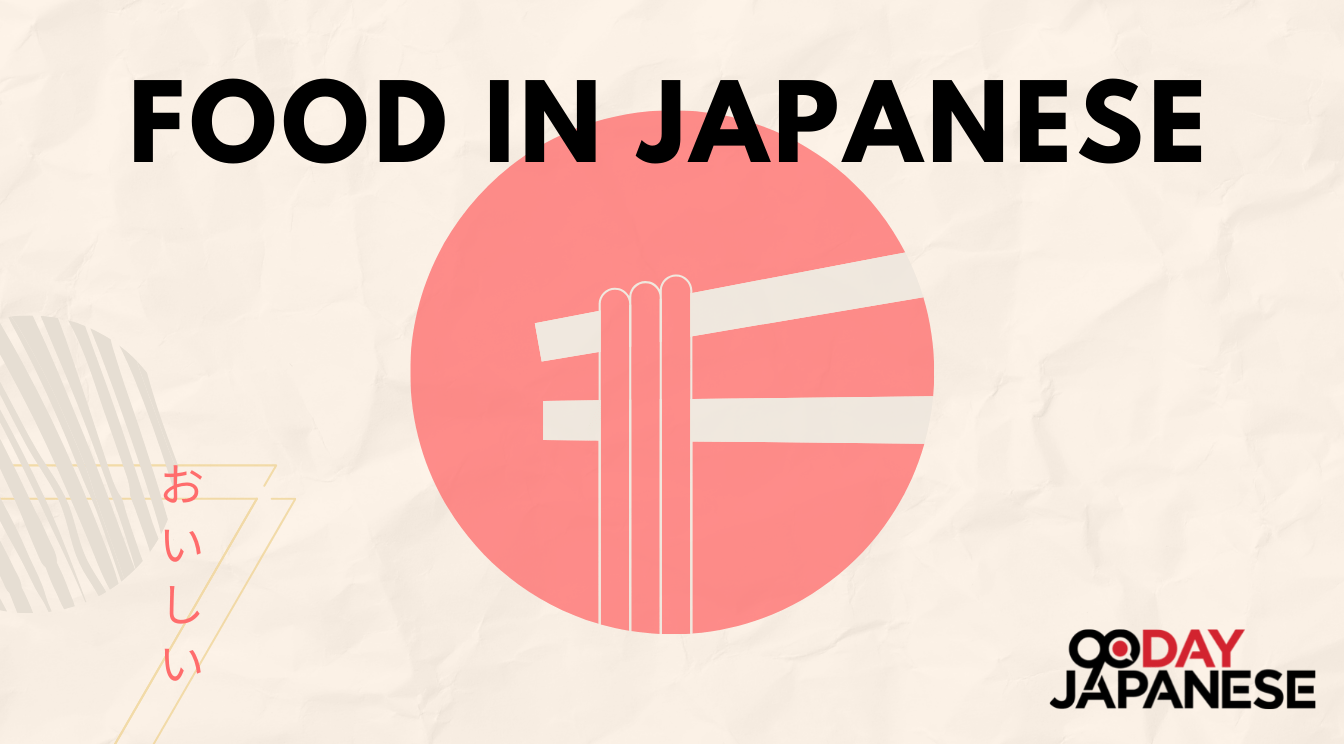 However, there is a broad variety of flavors and food to try in Japan. Let’s discover some Japanese food today!

How do you say “food” in Japanese?

The Japanese word for “food” is たべもの (tabemono | 食べ物). It comes from the verb たべる (taberu | 食べる), which means to eat, and もの (mono | 物), meaning thing. It literally means “things to eat.” In Japan, food culture is a big thing.

How you cook, what you eat, how you serve, locals care about a lot of these things. Having three meals in a day is standard in modern society, and it’s common to have a lunch box prepared with care.

Even for the words related to food in Japanese, there are a few variations. For example, ごはん (gohan | ご飯) is common among women and children, but めし (meshi | 飯) is a little cruder.

Here, I’m introducing you to the basics for everyday use.

The Japanese word for “meat” is にく (niku | 肉). Starting from Kobe beef, Japan is also a well-known producer of some quality meat. Especially Japan’s bred beef is called わぎゅう (wagyu | 和牛), and many foreign tourists are often amazed by its tenderness and rich fatty flavor.

There is a variety of meat-based dishes using beef, pork, and chicken brands all over the country. All of them are written with the kanji for meat which is niku (肉/にく) like this:

Japanese food すし (sushi | 寿司) has become world-famous, but since the country is an island surrounded by various seas and oceans, they offer a wide selection of seafood. They often appear in kanji or katakana.

Usually, the name of fish has radical さかな (sakana | 魚) and shellfish has むし (mushi | 虫/むし) in its kanji name. Here are some seafood-related words:

The word for “vegetables” in Japanese is やさい (yasai | 野菜).

In their supermarket, one can see the name of vegetables in hiragana or hiragana-kanji mixed form. Some of them might not be typical in your country, though they’re essential in Japanese cuisine, such as Tempura and Shabu-Shabu. See below for more information:

Thanks to the varied climates, the country produces a unique range of fruits, from cold-weather-suited to tropical fruits. Fuji apple is probably the most popular and widely known Japanese fruit since the 1980s.

Also, you might be surprised to see numerous kinds of かんきつ (kankitsu | 柑橘 | citrus or orange) and いちご (ichigo | 苺 | strawberry) in season. Here are some of the other Japanese words for fruits:

Just like Italian cuisines are based on olive oil and garlic, Japanese cuisine also requires its specialties. だし (dashi | 出汁), full of うまみ (umami | 旨味), is a key for most of Japan’s recipes, and みそ (miso | 味噌 ) adds a tangy and savory flavor. 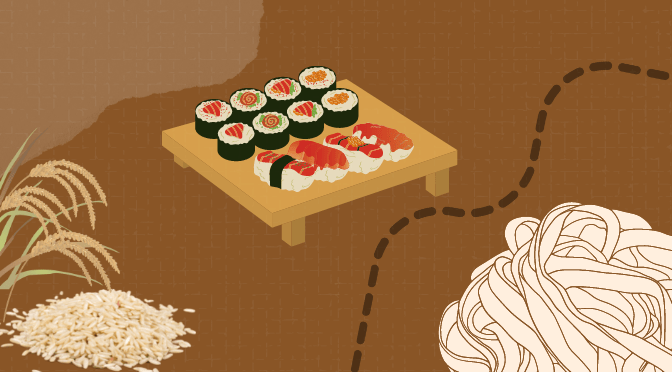 In this next section of the Japanese food vocabulary, you’ll learn about the names of popular Japanese food. These lists of traditional Japanese food are categorized from the ones you’ll find at home to those you can order at Japanese restaurants.

Typically, わしょく (washoku | 和食), the Japanese traditional style meal, consists of a main dish and a variety of side dishes. Since Washoku sets their ideal to いちじゅうさんさい (Ichiju Sansai | 一汁三菜/いち), meaning one soup and three side dishes, it’s common to serve the main dish with rice, soup, and pickled vegetables. Here’s what they’re called:

Japanese people love to focus on the food’s mild, flavorful taste. They aren’t particularly fond of spicy food. If you haven’t been to Japan yet and you’re wondering what food items are typically served, here they are:

Japanese noodles are loved by many – locals and foreigners alike! Wheat flour is the most important component in making noodles. Common noodle types are:

European and Asian cuisine influenced a lot of Japan’s cooking over time, and many fusion menus were created. Adapting to Japanese tastes, they like to make their own Japanese versions, like teriyaki burgers or green tea milkshakes.

As we mentioned above, these are called ようしょく (youshoku | 洋食) and are loved by all generations. Here are some of the favorites:

Western confectioneries are in general written with katakana using English-based words. But traditional Japanese sweets called wagashi have a variety of names. The most common wagashi is with sweetened red bean paste, and many of them look like refined artworks. 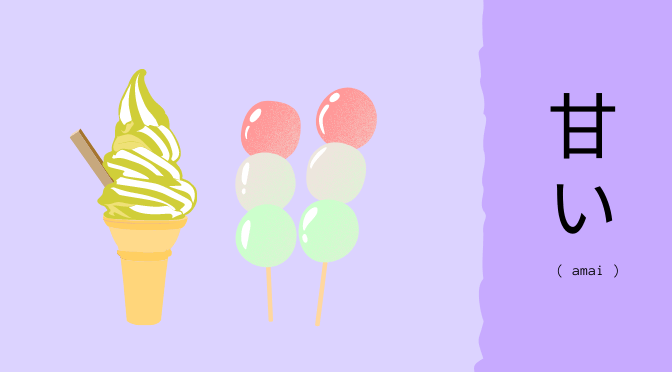 Traditional sweets are called わがし (wagashi | 和菓子). Seasonal components like fruits and flowers are often added when making these sweets. Here are some of the popular sweets:

Western confectioneries are called ようがし (yougashi | 洋菓子). These are a variety of European/Western sweets with a twist of Japanese. Ice cream is a very popular dessert in Japan. Sometimes, the locals like to eat it as an afternoon snack.

Adjectives to describe food in Japanese

How does it taste? Is it yummy? Here’s a short list of adjectives that describe the taste of the cuisine. How many of them did you know already?

Here’s how you can explain how you find the food’s flavor:

How do you like your drinks? There are noodles served cold, too. Here are some temperature-describing words:

Food will always be one of the most common topics out there. Describe your fantastic lunch or dinner using these:

If you’d like to know more about these descriptive words, we have an article dedicated to Japanese adjectives.

Japanese Food is Much More Than Sushi!

Once you learn some Japanese words for food, you won’t get lost in Japanese supermarkets or get confused about finding a specialized restaurant. We know how many countries in the world have Japanese restaurants because their cuisine is just delish!

There’re also many authentic Japanese food recipes available online. So, why don’t you find out your new favorites?