Have you ever wondered how to say “Happy Anniversary” in Japanese? By knowing this, you can congratulate your friends and families on their birthdays or other life events in the Japanese language. 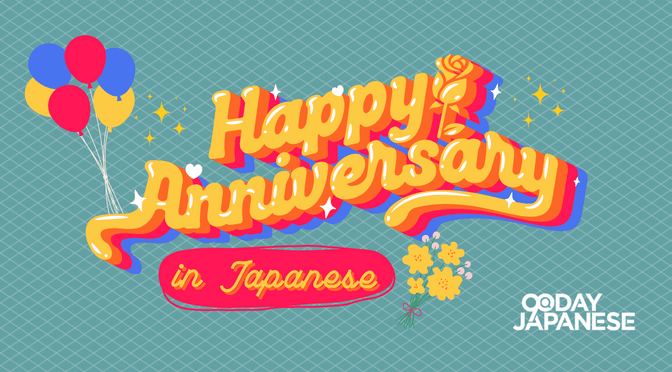 We’re going to learn how to say this greeting in this lesson. It will surely be a practical phrase to know whether you’re in Japan or not. Let’s find it out!

How to say “Happy Anniversary” in Japanese

In Japanese, there are two ways to say greet someone “Happy Anniversary:”

The phrase おめでとう (Omedetou) is the expression to pass your congratulations to someone close to you. While おめでとうございます (Omedetou gozaimasu) is more or less a politer way of expressing general celebrations.

Below are other words related to congratulating someone during anniversaries or birthdays.

How can we politely say “Happy Anniversary?”

If you’re familiar with the idea of Japanese けいご (Keigo | 敬語 | Polite forms, Honorifics) already, you might have questions about using this greeting on certain occasions. Let’s learn the politeness of each phrase here.

The most casual way to congratulate someone is to finish the phrase simply with おめでとう (Omedetou | Congratulations), and it’s the standard form for friends and family members. A casual congratulatory message conveys warm and friendly wishes to someone close to you.

On the other hand, when you want to sound a little more formal, adding an honorific prefix お (O | 御) or ご (Go | 御) to the noun will do the job. Honorific prefix might be confusing at first, but you can learn by heart eventually.

To make a formal phrase suitable for business or other formal occasions, we recommend using both the honorific prefix and politer ending ございます (gozaimasu | 御座います). (See the example: 3) Using the Hiragana form instead of the Kanji is preferred for the ございます(gozaimasu).

Here are the different ways to express “Happy wedding anniversary” to a couple:

Below are various ways to greet someone with a happy birthday in Japanese. We also have a full article that will tell you more about this greeting.

How to congratulate people on their anniversary

The single word おめでとう (Omedetou) is universal and good enough to congratulate the wife and husband’s anniversary. It also doesn’t have strict rules on when or how to use it.

However, mentioning someone’s birthday or anniversary before saying Omedetou is more common. It’s also typical to write these phrases in message cards, letters, and e-mails, together with verbal communications.

Even though the phrase きねんびおめでとう (Kinenbi omedetou | 記念日おめでとう) would be the perfect translation for the English “Happy Anniversary” in the Japanese language, people prefer a little more specific way to note what kind of きねんび it is to celebrate.

The most formal way to congratulate in Japanese

If you want to display your courtesy, you can remember these superior expressions.

Congratulations on your promotion. Best wishes from the bottom of my heart.

I would like to express my congratulatory greetings with this letter.

How can you say “〜 th” Anniversary/Birthday in Japanese?

To congratulate 1st, 2nd, 3rd, or more anniversaries in the Japanese language, you need to add め (Me | 目 | 〜th, 〜times) or other words.

If it’s the first anniversary, you can also use はじめて (Hajimete | 初めて | the first time). To congratulate from the second time on, see the examples below.

3-month anniversary gifts for my girlfriend

Many companies celebrated their 100th anniversary in 2018 in Japan

Below is some related vocabulary that you can use should you greet someone on their anniversary or birthday. 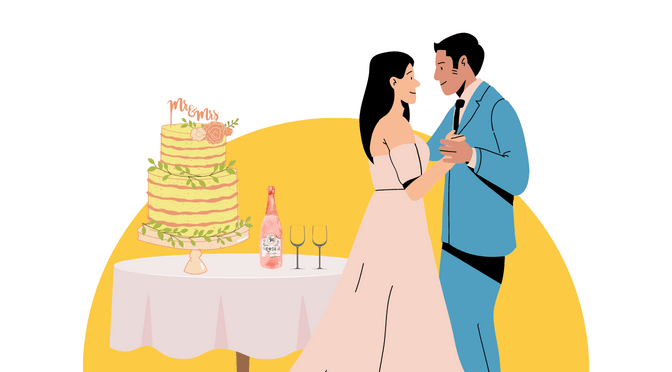 Some English phrases like “Happy Birthday” and “Happy Wedding” below are well-known in かたかな（Katakana | カタカナ | 片仮名) forms in Japan. Even though people don’t use these phrases in verbal communication much, it’s one of the typical ways to congratulate someone in a written message.

Additionally, Christian celebration phrases permeate Japanese society without great importance. You can often see these phrases as advertisements during the Christian holiday season, and Christmas is considered a romantic event rather than family time in Japan.

As a Japanese language learner, you’ve probably noticed that Japanese people care about each greeting’s meaning, while they also have a unique cultural feature for celebrating anniversaries and certain life events.

In this chapter, we learn what kind of anniversaries people give importance to and how people celebrate these anniversaries in Japan.

Ceremonies are probably one of the hallmarks of Japanese tradition, and school entrance or graduation ceremonies are no exception.

Japanese education year begins and completes in spring with beautiful cherry blossoms. はるはであいとわかれのきせつ (春は出会いと別れの季節 | Spring is a season of farewell) is one of the common sayings in Japan.

Congratulations on your graduation

The country has a work tradition based on lifetime employment and hiring new graduates. There has been some change in recent years, but many workers still spend their whole career at one company until their retirement.

Congratulations on your promotion

The Land of the Rising Sun is a monogamous society, and people over 18 years can get married legally in Japan. The modern style of matrimony began around the Muromachi period (むろまちじだい | 室町時代 | from 1336 to 1573).

In recent years, the country has been moving forward with the same-sex marriage condition though it still has a long way to go.

According to a survey conducted in 2020, over 50% of Japanese have a legal partner. Some couples celebrate anniversaries just like in the West, and each term originates in the original British names.

A survey conducted in 2020 indicated that over 75% of Japanese people do not believe in any religion. However, customs and ideas associated with Shinto and Buddhism have been influencing Japanese culture for a long time. Many Japanese families still carry out traditional celebrations, especially for their newly born babies and growing-up children.

For example, people used to believe that gods would watch over children until they became 7, so there are many occasions to celebrate their growth until that age in Japan. Here are some of the celebrations related to the children’s growth.

Probably, many people have heard once or twice that Japan is recognized as one of the most long-lived countries in the world. In 2021, Life expectancy reached the highest record in history in Japan, and it has become 81.64 for men and 87.74 for women.

It’s believed that Japan has been celebrating longevity called ちょうじゅいわい (Chouju iwai | 長寿祝い) since the Nara period (ならじだい | 奈良時代 | from 710 to 794), and it’s believed to derive from China.

Even today, many families celebrate their long-lived family members with good food and gifts to relish their health and the beauty of life. The colors below symbolize a happy and healthy life for the person celebrating the birthday.

In general, the Japanese word きねん (Kinen | 記念) has a meaning of commemoration in English, but it also refers to a simple memorialization and a non-celebratory recollection.

**the beginning of Garbage Reduction and Recycling Promotion Week, on the 30th of May

*** during the current Reiwa period

How many Omedetou songs have you listened to?

These are all-time favorite J-POP songs to congratulate various scenes and anniversaries. Why don’t you check them out for fun while studying Japanese?

Now you know how to say “Happy anniversary” in Japanese! Even if you don’t speak the Japanese language fluently yet, knowing the celebration message phrases are nice to learn.

You can congratulate a friend on their birthday or precious anniversary with おめでとう and smiles. We’re quite sure that the other person will be amazed and happy that you remember and how much your language skills has improved! If you did, let us know how it went, and drop your answers in the comment box below!

If you’re still interested to learn more about greetings, we have an article dedicated just to Japanese greetings right here.