Have a nice day in Japanese – How to use this greeting

For this article, we’ll finally discover how to say “have a nice day” in Japanese! And not just only a nice day, but many other nice things as well. 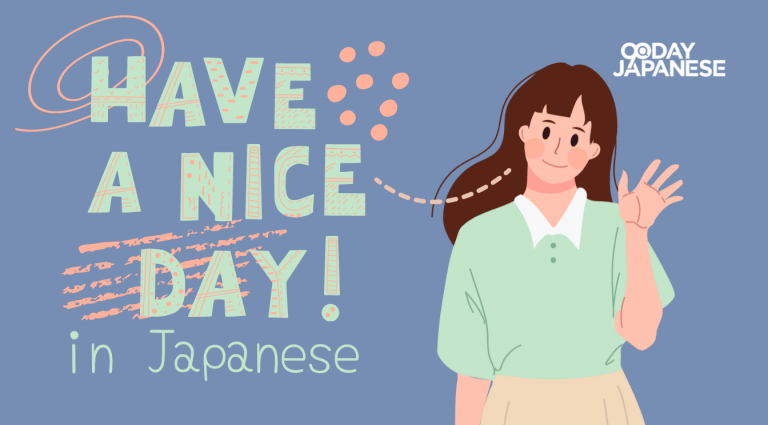 Here you can find both formal and informal versions of these expressions, as well as some tips on pronunciation and more. So sit up, think straight, and get ready to learn some Japanese!

How to say “Have a nice day” in Japanese

But again, it’s very rarely used amongst Japanese people, even older people. It’s something more likely to be found in a written letter by the hand of a very etiquette writer.

Contrary to what is taught in language school, Japanese sentences quite typically end in the object marker を(wo) when speaking casually. The reason is that, well, the Japanese love to keep things short and sweet when it comes to conversation.

There’s often no need to actually finish a sentence when its conclusion or subject is already implied, so it ends as a cliffhanger.

This phenomenon can be seen with the other Japanese particles as well, but it’s most commonly seen with を(wo)!

How to say “Have a good day” in Japanese

We know how normal it is for English speakers to wish someone a good day, but things aren’t quite the same in Japan. While there is a way to say “have a good day in Japanese,” it’s actually almost never said!

But, there are other expressions used in certain contexts to convey the exact same meaning, which is very common. All these and more are to be found in our list below. Regardless of the popularity, these expressions are worth studying and integrating into your own Japanese knowledge base!

Greeting used when leaving the home

The set Japanese expression いってらっしゃい (itterasshai) is used to send someone off who leaves home. It never changes! And unless someone is being particularly rude, it is always expected to be said.

This reply follows the expression いってきます(ittekimasu), which is used by the person leaving the house and which literally says, “I’ll go and come.”

Technically, there is no formal version of this phrase since it’s always used between family members or close friends within one’s home. Even a home for a day (such as a sleepover) would qualify this expression! An absolute must-learn Japanese expression.

How to say “Have a good night” in Japanese

This is a popular question for Japanese students developing their Japanese sentences, and the answer may be a little more tricky than you think! Let’s take a look!

“Enjoy your night” in Japanese

Just like with its daytime equivalent, this expression is the literal translation for “have a good night,” but it is rarely used when speaking Japanese. Here’s how you can say it formally: よいよるをすごしください (yoi yoru wo sugoshi kudasai | 良い夜を過ごし下さい).

The informal version of this greeting is よいよるを(yoi yoru wo | 良い夜を). The adjective よい (yoi), which means “good,” may also be replaced with すてきな (sutekina | 素敵な), which means “nice” in these expressions:

すてきなよるを(sutekina yoru wo | 素敵な夜を), which means “Have a nice night.”

You can say おやすみなさい (oyasumi nasai) to express “goodnight” in Japanese. To say it informally, you can just say おやすみ (oyasumi).

Greeting used when leaving the job

This expression gets used between coworkers in the office when leaving the workplace. It translates as something close to “good work today” and is always used at the end of the work day. For that reason, it is one way that coworkers might say “goodnight” to one another.

Note: While this is the most common use for this expression, this phrase can really be used anytime work or effort has been completed for the moment. If you and your friends have been building a treehouse for the last 4 hours and are finished, for the time being, you’d say 「お疲れ！」and then go on to do something else, like have a sushi party.

You might also use this phrase to greet your hard-working dad when he returns home from work. This is a versatile expression that is definitely worth mastering!

When you want to politely say that you will take the initiative to do something in Japanese, you use the expression おさきに (osaki ni | お先に) + Verb. If you are being causal, you can drop the verb and simply say 「お先に」before doing whatever it is you intend on doing.

As a response, you use either of the two expressions below.

If someone, for example, says they are leaving the dinner party early to go home, you can use these expressions. They translate to something like “please go on ahead.” When used in this way, these two phrases carry the sentiment of “have a good night.”

How to say “Have a good sleep” in Japanese

You can say this informal greeting as ゆっくりねてね (yukkuri nete ne | ゆっくり寝てね). The word ゆっくり(yukkuri) found in this expression is defined as “slowly,” but means easefully or smoothly. When you want someone to “take it easy,” you use this word.

So, this phrase is wishing someone to have an easeful sleep. You might also say to someone いいゆめをみてね (ii yume wo mite ne | いい夢を見てね) which is to say, “have nice dreams!”

These two expressions are never used in formal settings, so they weren’t included here. But, for the real diligent students of Japanese, here’s a grammar tip worth remembering:

To make the polite/formal form of the (te) form of a verb, just add ください (kudasai).

For example, this sentence uses the verb ねる(neru | 寝る) = to sleep

How to say “Have a good weekend” in Japanese

Using the sentence structures we’ve introduced just above, we can express a bunch of similar thoughts in Japanese! One of those thoughts is to wish someone a nice weekend. These sentences are a little bit different, but we’re sure they’ll pose no problem if you’ve been following along.

This first sentence is more of a polite request that you “take it easy over the weekend.”

The casual sentence is more of a shorthand way to say, “have a good weekend.”

How to say “Good luck” in Japanese

Another popular query amongst Japanese learners saying “good luck” in Japanese is a little more complex than you may think. Here is what you need to know about this expression:

こううん (kouun | 幸運) is the Japanese word that means “luck” or “fortune,” coming from the original Chinese meaning of the characters which comprise it. いのる (inoru | 祈る) roughly means to “pray for” or “wish for.” Hence, here is the direct translation of how to say good luck in Japanese.

The only problem is… no one ever uses it! You will probably never hear this expression used to wish someone good luck in Japanese. Instead, one of two much more common expressions is used:

We will skip the formalized version for these ones since they’re almost always used in a casual tone, but either way, you can remember the ください(kudasai) rule we mentioned before!

がんばって(ganbatte | 頑張って) more appropriately translates as “do your best” but in Japanese, it is used in place of when you might say “good luck” to someone in English. The same goes for the expression きをつけて(ki wo tsukete | 気を付けて), which literally means “be careful” or “take notice.”

How to say “Good job” in Japanese

You can say “good job” in Japanese as よくできました(yoku dekimashita | 良く出来ました). If you’re talking to people you’re close with, you can use the informal version, よくできた (yoku dekita | 良く出来た), to appreciate their hard work.

This useful Japanese expression says that something was done well and is a common way to say “good job” in Japanese. Here, the verb できる(dekiru | 出来る) is used, which is the “ability to do,” but the verb する(suru), which simply means “to do” can also be used and is just as common.

Another way to say it is しごとをよくしましたよ(shigoto wo yoku shimashita yo | 仕事をよくしましたよ). The word しごと(shigoto | 仕事) means “job/work” and can be added to these expressions like such if so desired. It’s definitely an expression to remember!

How to say “Have a good time” in Japanese

You can tell someone to have a good time in Japanese by saying たのしんでください (tanoshinde kudasai | 楽しんでください), which is its formal version. To say it informally, simply drop ください (kudasai), and you can say たのしんで(tanoshinde | 楽しんで).

Here’s how you can use it in a sentence:

Did you have a good time at the movie theater?

How to say “enjoy something” in Japanese

What’s neat about the expression above – 楽しんで｛ください｝- is that it can be placed after any subject to say you wish that someone enjoys something! It’s that simple; if you want to say “enjoy (anything)” in Japanese, here’s the formula to use to do so. Here are some examples for clarity:

ごきげんよう(gokigenyou) – When to use it in Japanese?

ごきげんよう(gokigenyou) is an older expression said to have been used by the women in the imperial courts in olden Japan. It is literally a wish given to someone that they remain feeling happy or lively.

When used upon meeting someone, it functions as both a greeting and a way to wish someone a cheerful departure. For that reason, when used as a departing statement, it can mean either “have a good day” or “have a good night” (depending on the time!)

To add, it is a formal statement with a feminine touch exclusively used by women. It is never used in the workplace or somber places, like during a funeral.

There are some private girls’ schools in Japan that require students to use it as a greeting, but that’s rare. Moreover, this expression is more commonly used in the Kansai region.

Bye for now, and have a great day!