How Are You in Japanese – Different Ways of Greetings

There are several ways to ask someone “how are you” in Japanese. こんにちは (Konnichiwa | Hello) and おげんきですか？ (O genki desu ka? | How are you?) are one of the first expressions when you start learning Japanese. 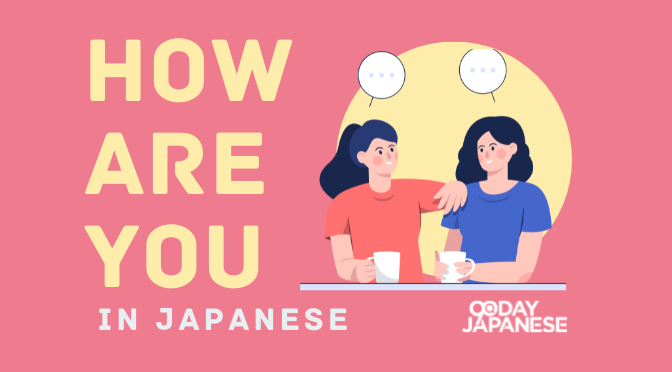 However, did you know that these are not exactly what you hear in everyday conversations in Japan? In this lesson, we’re learning about true-to-life Japanese greetings!

Things to Know Before Learning “How Are You” in Japanese

Before we start learning how to say “how are you“ in Japanese today, let’s focus on the あいさつ (Aisatsu | 挨拶 | greeting) in Japan.

The word Aisatsu conveyed the meaning of “to push each other” earlier, but it has developed into the “greeting” gradually via ぜん (Zen | 禅 | a school of Mahayana Buddhism).

Hugging and kissing aren’t typical in Japanese culture. People use more vocal communication than non-verbal communication when they say hello and how are you to each other. You can see people shaking hands, raising or waving their hands, patting someone’s shoulder, and bowing or nodding as a series of familiar gestures.

Here is some vocabulary related to greeting in Japan.

“How Are You” in Japanese

Today’s theme, How are you, is one of the most common salutations in any language, and using this phrase is pretty natural in day-to-day life in the West.

Yet, “how are you” in Japanese, “おげんきですか？ (O genki desu ka?)” is too mannerly to greet friends and family members. This is typically seen in letters, commonly used in business situations, and regularly heard on official occasions.

For example, when you want to ask how you are doing with your friends in Japanese, use the phrase げんき？ (Genki?) instead of O genki desu ka?. Feel free to use some variations with your close friend and on casual occasions.

We’ve added more of these variations below, which you can use depending on who you are speaking with.

Formal “How Are You” in Japanese

Japanese people don’t say O genki desu ka? as frequently as the textbooks teach you. They use different ways and expressions instead. For instance, it’s common to emphasize the period they didn’t see each other by using past tense such as O genki deshita ka?.

For example, Keigo is preferred on occasions when people meet the elderly, someone with higher status, someone you want to show your respect to, and someone they haven’t seen before.

Formal Expressions and Other Phrases

Using non-formal phrases in inappropriate situations is considered rude in Japan, so use polite expressions if you’re not so sure. Let’s take a look at the variations in a formal way!

*This literally means, “Were there any changes?”

**It’s a common phrase in Japanese business situations but not easy to get translated into English.

***It’s an old-fashioned and feminine phrase.

Here are some additional vocabulary in the formal version.

Informal Expressions Related to “How Are You” in Japanese

Have you experienced that a Japanese person answered your how are you question a little awkwardly? Some people who speak fluent English would reply naturally, but people at the beginner level would say so-so. The reason isn’t only their language skills and lack of experience.

Informal Expressions and Other Phrases

The amicable conversations often begin with the phrase おまたせ (Omatase | Sorry for the wait) or just raising their hand, and friendly chats follow. Here are more of these expressions.

*When you meet someone unexpectedly.

Below are other related vocabulary in the informal version.

When you’re concerned about someone’s health or physical conditions, you can use the following phrase to ask how they are feeling and doing. They all mean, “how is it?” in English and are almost equally exchangeable.

Here are some examples of questions that you can ask to check if someone is okay in the polite version.

*No distinctions between mental and physical conditions

**This literally means How is your health condition?

Below are the questions that you can ask someone in a casual version.

Words of Encouragement for Health and Physical Conditions

By skipping ですか？ (desu ka? ) or ください (kudasai ), you can ask someone the same thing more casually.

*the most common expression

How to Answer “How Are You” in Japanese

Like English, there are various ways to answer O genki desu ka? in Japanese. Here, we’ll show you some suggestions. They are all written formally, but you can make them more easy-going by simply omitting です (desu) and ます (masu) words.

For a positive response, you can answer the person asking with the sentences below.

*This is for both mental and physical conditions.

Here are the sentences that you can use to answer someone how you are but you’re unsure if you’re feeling good or not.

If you’re certain that you’re not okay, here are the sentences that you can use in response.

Thank You for Your Concern

Lastly, it’s always polite to say “thank you” to the person for their concern. Here are the sentences that you can use.

We also have an article dedicated to saying “thank you” in Japanese.

Other Basic Greetings in the Japanese Language

Apart from asking someone how they are, there are also other ways to greet people in Japan. We’ve listed some of them below.

Here are the standard greetings in Japanese that you can use.

If you’re speaking to a friend, family, or someone close to you, you can use the greetings below.

Here are more ways to speak with someone casually. These shouldn’t be used with someone older or of higher status.

“How Are You” in Japanese and The Gifting Customs

Japan has a unique gift-giving custom apart from someone’s birthdays or during the Christmas holidays.

Japanese people have hello and how are you visit with a small gift to their new neighbors when they move into new houses and apartments. It’s also common to bring a gift when visiting the hospital to see how their friend, a family member, and a co-worker are doing.

These how-are-you visits and gifts exist upon the wishes with “Best Regards” or “No disaster will remain,” so comforting chats and gifts that disappear after use and eat are preferred.

*A gift from the patient.

**A gift to the patient.

***A gift to the people who moved in.

****A gift from the people who moved in.

What Aisatsu Means in Japanese Society

Presumably, one could say that Japanese people put importance on あいさつ (Aisatsu | greeting) way more than in the West. Japanese people suppose it’s a way to show their consideration, good manners, and cooperative attitudes in society. The importance of Aisatsu has been imprinted in practice for a long time.

Basic Rules for Bowing and Hello/How Are You in Japanese

Bowing is probably one of the most prominent Asian cultures. There are occasions that Japanese people habitually lower their torso and greet, but many are not familiar with the explicit rules of bowing. おじぎ (Ojigi | お辞儀 | bow) is the universal term in the Japanese language, but it has three different ways and invisible intentions.

It’s said that “verbal greeting first and bowing second” is the proper way.

However, it’s more than enough to say hello with a smile and give the company a small nod as an extra.

In addition to that, no need to bow or nod when you ask someone, “how are you” in Japanese. Don’t forget that the idea of Ojigi is similar to Keigo in the Japanese language. Try adding a nod or bow whenever you speak in a formal way.

“How Are You” in Japanese from the Heart and the World

Greetings are one of the essentials in learning Japanese and other languages. Probably, its styles and people’s perspectives vary from place to place and from time to time, but the fundamental idea remains the same everywhere.

The expression how are you shows your good intentions towards others and society, even though it sometimes is a form of social platitude. Start a casual talk with Genki? or another phrase next time to have more meaningful and fun interactions!