Ever stop to wonder just how to remember Japanese words more efficiently? Well, we sure have! Mastering any language requires learning and retaining new vocabulary words along the way. For a language like Japanese, that can be especially challenging given the sheer number of complex characters. 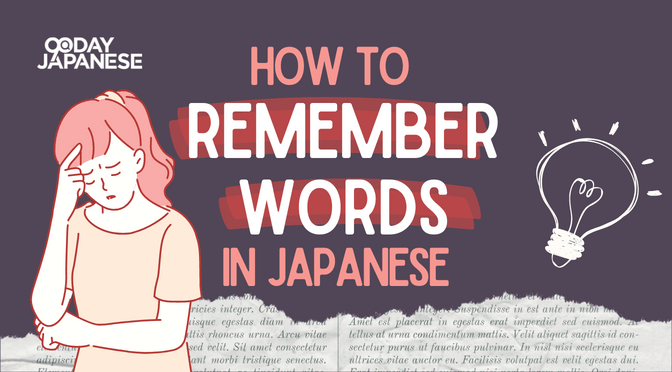 In today’s article, we break down the keys to improving your Japanese memorization skills, starting from the basic to the more complex. You will notice that many of the techniques provided use similar principles but with subtle nuances. Be intuitive, experiment with as many as you’d like, and utilize the ones that work best for you.

Putting together all of these techniques will give you the best way to remember Japanese vocabulary. We’ll teach you the best ones below. Let’s get right into it!

How to Remember Hiragana and Katakana

This is the starting point of becoming proficient in Japanese and must be mastered before moving forward. Before even going for Japanese grammar, phrases, or words, make sure to be well-equipped with the alphabet! Luckily, there are fewer than 50 characters/letters for each alphabet, so you’ll get it (if you haven’t already) in no time!

Usually, we don’t recommend using this method for studying language, but it finds its purpose in this scenario. In case you aren’t aware, the Rote memorization method of studying is essentially the cramming method.

It’s that dreadful image of a withered zombie student hunched over a desk for hours just cramming material into their brain. And that’s what we’re recommending for the Japanese alphabet! In reality, there is no better way to practice the Japanese alphabet – and no, it doesn’t have to be that horrible!

There are just a few characters to learn, so spending 3-5 hours a week reviewing the sounds and shapes should do the trick. You can start this in your spare time! The best approach is to treat learning these alphabets the way you treated learning your native alphabet in primary school.

That is to say, write each letter/character repeatedly, taking your time to get the shape perfect. Devote at least one entire page for each character. Speak the character’s sound out loud as you write. Stick to this technique, and you’ll have it down pat in no time!

How to Remember Japanese Kanji

With the easy stuff out of the way, let’s move on to bigger fish – Kanji. かんじ(kanji｜漢字) is the complex symbol found in the Japanese language, originally adopted from China. As far as writing and recognition are concerned, they pose the greatest challenge for Japanese students.

Here are some of the best techniques for remembering Kanji:

Learning the Components of Kanji

All Kanji is made up of what are known as radicals. Radicals are pretty much the building blocks of Kanji themselves. Even the simplest stroke can be radical. Furthermore, simple combinations of radicals create what are known as components.

In essence, radicals make up components that make up kanji. Learning these components will help you remember Japanese Kanji, which also means learning Japanese vocabulary!

To see this in action, let’s look at a few examples.

The component 言(gen) represents the idea of speech or word. This component can be found in other words with a similar theme, such as:

記す(shirusu/しるす) = to note or write down

There are only a few hundred components compared to the thousands of kanji out there, so make them a priority to get ahead of the competition!

Many of the beginner-level kanji look quite similar to what they represent. These characters have probably been around for a long time. Take, for example, the character 木(ki), which represents a tree or wood. The character itself looks a lot like a standing tree, and that makes it easier to remember – there is a clear visual association with the symbol and its meaning.

The same might be said for characters like 川 (kawa), which means river, or 山 (yama), representing a mountain.

How to remember Kanji with complex characters

For very complex characters, you’ll need some storytelling skills. Here’s where the previously-mentioned components come into play. Let’s take the kanji 鴎 (kamome), for example. This character is comprised of the components for bird and ward – it means “seagull.”

So how can you remember this Japanese word after learning the components of its kanji? Well, the bird part is rather clear. Ward has a few definitions in English, usually meaning a separate room or space or “to protect,” as in “I will ward off the enemy.”

So perhaps you can imagine a seagull that is warding off some nameless enemies from a certain hospital ward, and voila! – you’ve created a story to help you remember the meaning of a kanji!

This technique of creating your own stories might seem a little odd, but it’s actually one of the most effective for retaining information in the long term, and there’s research to back it up… so give it a shot!

Remembering the Kanji – A Book

Our “seagull” example above just scratches the surface by emphasizing the power of imaginative association. There is a really great book (two books, actually) titled “Remembering the Kanji” by James Heisig that is a deep dive into this amazing form of remembering information.

The book first teaches you the most important components, or “primitive elements,” of kanji before helping you combine them together into more and more complex characters. There are even imaginative examples for almost all of the kanji provided by the author already!

It’s definitely worth a shot for anyone dead-serious about studying kanji, and it’ll probably even impress your Japanese friends!

How to Memorize Japanese Vocabulary

With the specifics of the Japanese writing systems out of the way, we move on to other powerful techniques to memorize Japanese vocabulary in general!

Vocabulary words are a big part of Japanese studies, but you can’t proceed without knowing the alphabet. So, keep in mind that one does not exist without the other, so be sure to incorporate the Japanese alphabet and kanji into your practice routine!

We start off with another visualization-learning tool of our very own by the name of CLIPS. CLIPS is a technique where learners create imaginative movie clips within their minds to aid with memorization.

It’s a little more versatile than the technique for remembering kanji that we spoke about just before since there are no components that must be a part of your story. There’s also a process to help you create this screenplay movie:

This kind of deep associative learning helps with bidirectional comprehension (comprehending both when giving and receiving). Use it for those really tricky vocabulary words!

Mnemonics come naturally for many Japanese learners, as the brain is a master of connecting similar things together. Mnemonics are when you associate the sounds of foreign words with other words or things already familiar to you.

For example, the Japanese verb for “to eat” is たべる(taberu|食べる). The pronunciation of this verb sounds a lot like the English word “table” if pronounced with a Japanese accent. This is a mnemonic association relating pronunciation to pronunciation.

Another example might be seen in the Japanese word for elephant, ぞう(zou|像). Although this word does not sound like “elephant,” it does sound like the English word “zoo,” so there is a clear association. This time, the mnemonic association is made between pronunciation and a related concept.

The sky is the limit when it comes to mnemonics making this technique one of the most powerful for learning new Japanese words. So use it wherever it works, and where it doesn’t (because there are times it won’t), use another technique!

The SRS system is pretty much the foundational system to learning anything – math, language, dance, anything! You study something. You learn something. You take a break. You do it all over again. In time, you get better and better. It is a learning system that takes advantage of the system already put in place by the brain.

Since it’s so diverse, we decided to add it further along in this article, but it absolutely must be mentioned and should be taken seriously. The bottom line is if you want to get better at something (like remembering new words), you have to apply yourself consistently.

This is not the same thing as cramming, which is nowhere near as effective. This is pacing yourself at a steady rate, perhaps every day even, and training your brain in a practical way. If cramming is an exhausting sprint, SRS is a steady-going marathon. Baby steps, people!

Make Japanese a Part of Your Daily Life

Following suit with our last point, remember that practice never has to look like brutal, repetitious drilling – in fact, it shouldn’t!

Thusly, here are some further techniques to remember words while doing the things you love most.

Music and melody are a hack for studying and retention. All major video games, films, commercials, ads, etc., use sound to help you remember whatever is being presented to you. Language works the same.

Listen to your favorite Japanese songs and study Japanese words as you go along. Odds are, whatever new words you learn will stick for a long time with the help of both the music and narrative context associated with them! Create a vocabulary list as you’re listening to these songs.

Movies and television dramas are other awesome ways to remember Japanese words and to learn Japanese in general while simply enjoying yourself. Subtitles make for an additional study aid while training your eyes and ears.

Also, what’s cool about television in Japan is that oftentimes specific context is given in the subtitles to help natives better understand the context of what’s being conveyed. Talk about a profound language!

This kind of practice is for high-level Japanese students or those looking for a real challenge. You’re sure to come across all kinds of words and Japanese kanji in some good reading material. Just be sure to get something with ふりがな(furigana) to help you read the characters!

Note: Keep in mind that popular media like anime and music are filled with all kinds of shorthand words, slang words, cultural references, puns, you name it. If you want to be sure you’re studying politically-correct Japanese, look for sources along those lines of output. Otherwise, do your proper research, and check your dictionary before making a word or expression a part of your daily conversation!

Aside from all the manual labor (fun stuff) you can do to remember more Japanese words, there are a bunch of automated tools to aid in the process. We’ve found a few of the best ones and listed them here!

Anki is a free app that uses flashcards to help you study.

Lang-8 is a Japanese-founded app that brings together native speakers, promoting language and cultural exchange for students all over the world

These methods have been proven effective so give them a try! You can test each of them and see which one works best for your language learning. As you learn Japanese through the strategies and apps above, you’ll be able to speak Japanese and learn new words and phrases in no time!