How to say “Shy” in Japanese – Learn the different ways

Learning how to say “shy” in Japanese is helpful in picking up on cues from others. Politeness is a big deal in Japan, and on the whole, Japanese people may seem quite reserved to westerners. 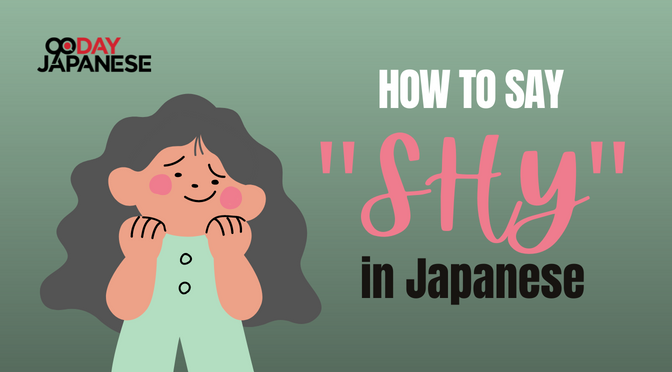 A companion may want to tell you they feel nervous, and it’s good to be able to understand what they’re saying. Or it can also be the other way around. Either way, we’ll teach you ways to say “shy” in Japanese!

“Tereru” is a Japanese adjective used to describe the feeling of shyness. If you’re around a lot of people you don’t know, or you see someone you find attractive and feel nervous, you can tell your friends “Terete iru,” which is “I feel shy.”

Note that for most Japanese phrases, the “I” form is understood. You can say “Terete iru” instead of “Watashi wa terete iru.” But if you want to make it absolutely clear that you’re referring to yourself, add watashi wa.

While Tereru is used for describing a feeling, there is another way to say this phrase when describing your personality. You can say that you’re shy using the word てれや (Tereya | 照れ屋).

“Tereya” is for when you want to say, “I am a shy person.” Rather than for a specific situation, this is how to tell someone that you or a friend exhibit shyness as a personality trait.

While in some cultures, this may seem like an insult, it is not thought of so negatively in Japan, so don’t worry about offending someone by telling others that they are shy. 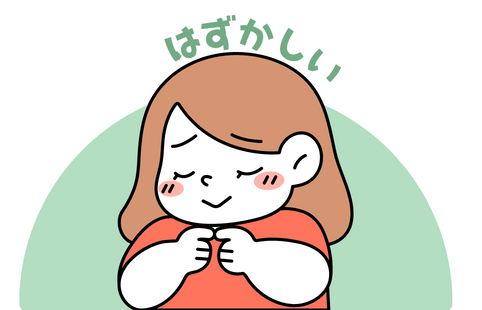 はずかしい (Hazukashii | 恥ずかしい)  means “embarrassing” or “embarrassed” in Japanese. Because Japan is a culture of politeness and shyness is a commonly expressed trait, this word is used all the time and can be said on its own as an exclamation.

Hazukashii can also be used in a sentence when describing something or someone that embarrassed you. In the past tense, it is “hazukashikatta.” One nice thing about this word is that not only do you not need other words to make a sentence, but you can say it about others as well as yourself.

Example: a friend introduces you to her four-year-old daughter, who is wearing a nice dress. You say, “Kirei desu,” meaning “you look pretty.” The little girl covers her eyes in embarrassment. You can say “hazukashii!” to describe the girl’s feelings.

If you want to explain that your friend doesn’t talk a lot, there are Japanese words for that too. The word for “quiet” in Japan is しずか (Shizuka | 静か).

This word can be used for “it’s quiet” in general. If you want to describe a person, do so like this:

While being outgoing is rare in Japan, if you’re the type who’s unafraid of big groups and new people, you can let everyone know you’re social by saying:

“I am not shy” in Japanese

To let your companions know you’re not afraid of social situations, you simply make the word for “shy” negative by adding “nai” or “masen,” like this:

The nice thing about the phrases in this lesson is that they’re all relatively short, so you can memorize them for use in simple conversation. However, you may hear many variations on them spoken by others.

You can take it slow, but be consistent! You can start with the Japanese alphabet, then on to the words, until you can also form phrases and, eventually, Japanese sentences!

Now you know how to say “shy” in Japanese and that there’s no need to hesitate in expressing if you are or aren’t shy in some situations. If you think you’re no longer as shy anymore and can initiate greeting someone, how about learning how to say “hello” in Japanese next?