This article will teach you how to say “I love you” in Japanese. It’s another exciting installment of Japanese language learning!

There are many ways to express affection in any language, and Japanese is no exception. Every Japanese student is sure to find utility in knowing how to express appreciation at all levels, whether shallow or deep. 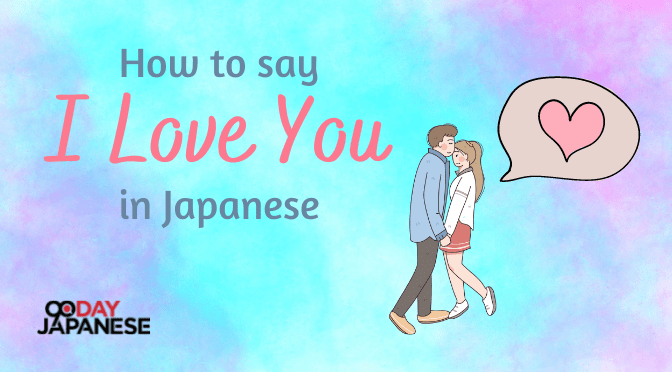 This article contains all the most common ways to say “I love you” in Japanese and the nuance of each phrase. Plus, we provide deeper insight into expressing Japanese expression as a whole.

We’ll be presenting the vocabulary below in hiragana, kanji, and romaji, along with their meanings. So, it’s best to be prepared and well-equipped with the knowledge of the Japanese alphabet!

So grab your pen and paper, and start this lovely adventure!

The 3 Ways to Say “I Love You” in Japanese

There are three significant ways to say “I love you” in Japanese:

We’ve listed each of them here in order of intensity/intimacy, starting from lightest to heaviest.

Even before you begin learning Japanese seriously, you will (or already have) come across this word – 好き (すき | suki). You can use a similar expression to “I love you” in Japanese by saying すきです(Suki desu｜好きです). This word is used to say that something is liked. You can use it in all the same ways that it can be used in English, including with people!

This is a gender-neutral word, and again, context means everything. Like in English, using 好き(すき | suki) to say you like someone often sounds like a confession of one’s deeper emotions. It’s what you’d say to “put a friend on” to your intentions for the relationship, meaning you want to start dating that person.

On the other hand, using 好き (すき | suki) with a close partner you’ve been with for a while or with family usually translates as “I love you” in Japanese. Due to its versatility, think twice about context and implication before throwing this word out to your language exchange partner!

The character 大  (tai/dai|たい・だい) in Japanese means great or big. Therefore, 大好き (だいすき | daisuki) can translate most directly as “I really like you” in English. And while we’re technically still in the realm of “like” here, this sentiment is much stronger than just saying すきです(sukidesu).

When speaking about a thing, 大好き (だいすき | daisuki) can mean I really like or love this thing! But that’s not the jeopardy here. When expressing feelings about other people, this term carries the same meaning. Again, it all depends on the context.

For example, if you and your friend とみこ(Tomiko) have enjoyed a marvelous day of adventure, laughter, and fun together before you blurt out とみこさんのことがだいすきだよ！(Tomiko san no koto ga daisuki da yo!), it sounds like you’re saying, “I really enjoy spending time with you!”

On the flip side, if at the end of awkward silence before a final departure after catching a movie with とみこ, you whisper 「とみこさんのことが大好きだよ!」 it’s surely a confession of love! Okay, this statement can be slightly less than “love,” but it does imply that you have incredibly strong feelings for that person.

“I love you” in Japanese

Here’s where things start to get spicy. The character 愛 (ai) literally means “love” in Japanese. The casual continuous form for the verb する (suru, or, “to do”) is している(shite iru). Therefore, saying あいしている(ai shiteru｜愛している) literally means I am in the state of loving [you]!

Compared to the rest, this phrase is most similar to the English “I love you,” hence, why it comes up in Google translate if you were to search. And although that’s the case, this term is much stronger than its very flexible English counterpart. This term really means, “I am deeply, deeply in love with you”!

To that point, 愛している (あいしている | ai shiteru) is almost exclusively used in a romantic context with someone you plan to be with forever. We’re talking serious partnerships. In very rare situations, it could be used toward a family member during an emotionally traumatic moment, but still, 大好き (だいすき | daisuki) is more likely to be used.

Also, if you were to use the polite form of this expression, あいしています(ai shiteimasu｜愛しています), it would almost always be taken as a joke. This is one of the rare times something akin to sarcasm shows its face in the Japanese language. Alternatively, the formal version of this expression is sometimes used in dramas when a climactic confession of love occurs.

For the most part, if you ever even hear this Japanese expression for “I love you,” it’ll be in the short form!

Other Ways to Express Love in Japanese

The expressions we just covered are known by all Japanese natives and used by most. But, by no means do they encompass all ways to say “I love you” in Japanese.

Ways to say “I love you” in Japanese based on location

Japan is diverse, with several provinces, ways of life, and dialects. If you travel around Japan, you’ll hear different colloquial expressions to say, “I love you.”

For example, folks hailing from the well-known city of Osaka all speak a dialect known as かんさいべん (kansaiben|関西弁).かんさい (kansai｜関西) is the region in which おおさか (oosaka｜大阪) is located.

Instead of a simple (suki yo), someone from this region is likely to say すきやねん (suki yanen) to express the same sentiment. Instead of simply saying 大好き(daisuki), you’re more likely to hear a めっちゃ大好きやで！ (meccha daisuki ya de)!

The list goes on and on – talk about language variability!

Moreover, there are more creative words that express one’s appreciation or care for another. Here are a few examples:

“I am crazy about you” in Japanese

The sentence below roughly translates to “I am crazy about you!”

Couples might use this expression toward one another after several dates (and at the right time, of course) to say すきですよ(sukidesuyo｜好きですよ) without actually saying it.

“I feel at home when I’m with you” in Japanese

Here’s a sweet way to express affection. It’s like saying, “I feel at home when I’m with you.”

Again, this phrase is to be said most effectively after a few dates with someone – and timing is everything!

The word 恋しい translates rather directly as “missed” – it’s an adjective used to describe things that you miss. Usually, when using a standalone adjective (either by itself or with the verb です(desu)), the subject is found in the context.

“Falling for someone else” in Japanese

There is another Japanese character and expression used to signify love or desire that’s slightly different from the rest, which is 恋 (koi). This character can also be read as れん (ren). The terms こいしている (Koi shiteiru｜恋している) and こいにおちた (Koi ni ochita｜恋に落ちた) imply that you are falling for someone else.

It’s an intransitive verb, meaning it does not require a direct object to form a complete thought. Moreover, compared to 愛 (ai), which is symbolic of long-lasting love, 恋 (koi) implies one’s selfish desires – a longing and passion for the object in question. 恋 (koi) does not expect reciprocity for its desire.

This term is usually kept to oneself or confessed to close friends about a love/desire for another. Try to remember it as a third-person love expression or an expression of him/her/them love.

Here are some common words using the kanji  恋:

Note: Although we’ve omitted it from the examples above for simplicity’s sake, the particle よ (yo) often follows these Japanese love expressions.

The particle よ (yo) creates an emphasis in speech – it’s similar to saying “…, you know?” after an expression in English. It plays a sort of convincing factor within a statement.

In truth, Japanese native speakers rarely say, “I love you.” It seems a bit cold for the western-minded among us, but that’s how it is. Saying “I love you” in any of the varieties we’ve mentioned already can feel cringy, unusual, and even suspicious!

On the contrary, the Japanese find different ways to show their feelings than simply speaking. This holds true in every facet of the language, whether showing remorse, adoration, disrespect, etc.

There are deep-rooted cultural and social expectations within the Japanese universe rules not to be broken. One of those rules is to be extremely considerate about what you say and do to make other people feel. Therefore, the Japanese are masters of subtle implications to display their true feelings.

Take, for example, a tradition such as Valentine’s Day. On Valentine’s Day in Japan, women give chocolate (called 義理チョコ｜girichoco) to all the positive male figures in their life. The tradition is based on appreciation and has nothing to do with romance.

But, perhaps your crush uses this opportunity to let you on to her true feelings by secretly giving you more chocolate than everyone else or leaving you a note wishing you will enjoy the chocolate.

This is the default way all Japanese express their emotions of love and affection!

Tips for Expressing Love In Japanese

As we’ve learned, there are plenty of ways to express your love in Japanese. You just need to know which one to use, depending on the situation.

If you still want to know more Japanese words, browse our list of Japanese nouns here!