In this lesson, we teach you how to say “I’m hungry” in Japanese along with its related phrases. It will be one of the key phrases for expressing how you feel in your day-to-day conversation. Let’s get started! 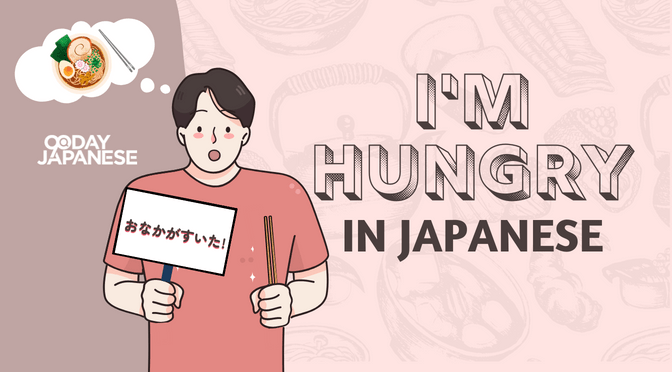 How to Say “I’m Hungry” in Japanese

We say “I am hungry” when we feel hungry in English, but the Japanese expression doesn’t start with “I” as a subject. Instead, it starts with “My stomach” as a subject.

おなかがすいた (Onaka ga suita | お腹が空いた) and おなかがへった (Onaka ga hetta | お腹が減った) are the most common way of saying “I’m hungry,” and it literally means “My stomach is emptied” or “Things in my belly/tummy has decreased.” First, we will show you the most commonly used phrases here.

Here are various ways to say that you are hungry in Japanese. We’ve also added different ways to say “I’m hungry,” depending on who you are speaking with below.

If you need to speak formally, such as speaking with someone of higher rank or status, here are the phrases that you can use to say when you’re hungry.

Japanese people tend to skip the subject and the case particle は (wa) or が (ga) while talking.

You will probably hear おなかすいた (Onaka suita | お腹空いた), おなかへった (Onaka hetta | お腹減った), and はらへった (Hara hetta | 腹減った) instead of the complete sentences with subject and particle more often, but the meanings remain the same.

The following expressions are the informal way to say “I’m hungry” in the Japanese language, and it’s suitable for conversation among Japanese friends, family members, and close people.

*The phrases can be slightly masculine.

You can use the expression おなかがとてもすいた (Onaka ga totemo suita | お腹がとても空いた) or おなかがすごくすいた (Onaka ga sugoku suita | お腹がすごく空いた) by adding adjectives to say “I’m hungry” and “I’m starving” in Japanese.

However, there are other ways to say them casually. Let’s take a look!

*The expressions can be slightly masculine.

How to say “I’m full” in Japanese

If you’ve already eaten, here are the different ways to say “I’m full” in Japanese.

If you’re already feeling full, here are the phrases that you can use in a polite and formal way.

*My stomach is about to burst

Besides expressing that you are hungry, here are other related expressions that you can say in Japanese. These can be feeling of thirst or when your stomach rumbles due to hunger.

If you’re thirsty, you can use the expression のどがかわいた (Nodo ga kawaita | 喉が渇いた), and this literally means “My throat is dried up.”

The definition of the Japanese verb すく (Suku | 空く) is to start having an open space after certain things are gone.

There is a word closer to “hungry” in English, though the Japanese verb うえる (Ueru | 飢える) gives a stronger hunger with agony than a light hunger. Therefore, it’s expected to convey the severe scarcity of food and not in everyday-life conversation.

Here are the different Japanese verbs associated with feeling hungry.

If you’d like to learn more about verbs, our separate article on Japanese verbs can teach you more about them.

Below are different ways to say “I’m hungry” considering its various verb tenses. 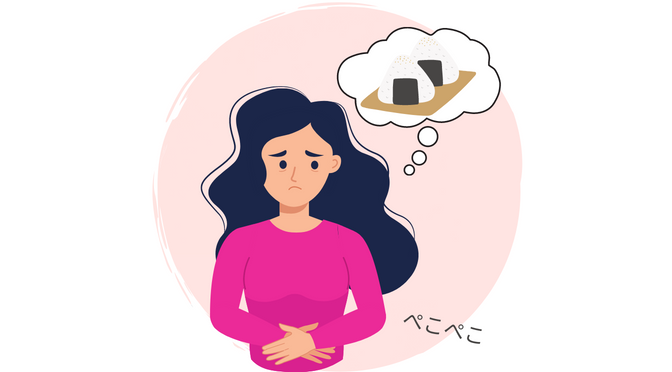 Now that you know how to say “I’m hungry” in the Japanese language, here are more ways for you to use the newly-learned vocabulary.

How to ask “Are you hungry?” and other questions

We’ve learned how to say “I’m hungry,” but what about asking questions related to it? Let’s take a look at the common phrases here. This way, you’ll know how to respond better by having knowledge of these questions. Some of them are useful for visitors to Japan, too.

Adverbs can help you a lot

You can convey the situation better by using adverbs. Many words are very functional but have more than one meaning each. Therefore, don’t forget to pay attention to the context rather than the words themselves. Here are some sample adverbs:

Below are some phrases that you can use with the adverbs listed above.

Dialects of I’m Hungry and I’m Full in Japanese

Apart from the different ways to express being hungry and full in Japanese, as listed above, there are also more ways of saying these terms. These depend on certain areas in Japan, as listed below.

Idioms are quite common in Japan. And so we have listed those which are related to feeling hungry below, along with their meaning.

Greeting and useful vocabulary at the table

Before you fill your stomach with Japanese food, here is some useful vocabulary related to eating.

Before we wrap this up, did you know that there’s an onomatopoeia specifically used when you’re feeling hungry? It’s こぺこぺ (peko peko) or the sound of a grumbling stomach! If you’d like to know more about these sounds, we have a fun article on Japanese onomatopoeia.

We hope this lesson has filled you with new knowledge of Japanese words and phrases!