How to Introduce Yourself in Japanese – All You Need To Know

Today, we’ll teach you simple steps and give you tips on how to introduce yourself in Japanese.

If you’re meeting a Japanese for the first time, knowing how to introduce yourself in Japanese will help you leave a good impression. It’s also one way to impress your boss, colleagues, teachers, or classmates on your first day at work, or school in Japan.

Read on to get started! 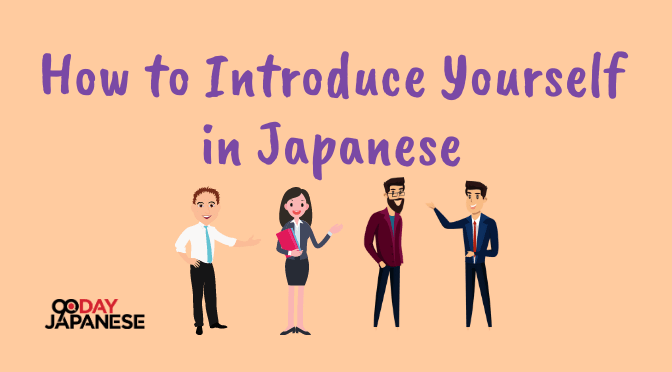 What is “self-introduction” in Japanese?

Before you get into learning how to introduce yourself in Japanese, let’s first learn what “self-introduction” is in Japanese.

How to introduce yourself in Japanese?

Japanese people usually start their introduction with greetings and a question that is similar to the English question “How are you”. When introducing yourself in Japanese, you can do these first.

After doing these, you can say your name, where you live and then followed by other information you wish to share about yourself such as your school if you are a student, occupation if you’re working and hobbies.

The Japanese are taught the importance of the あいさつ Aisatsu or greetings from childhood. It is very important that you start your introduction with the correct and proper greeting. Remember to do your greeting with a simple bow. Bowing is a sign of respect and politeness in Japanese culture.

Below is a list of basic Japanese greetings you’ll use when introducing yourself to others. 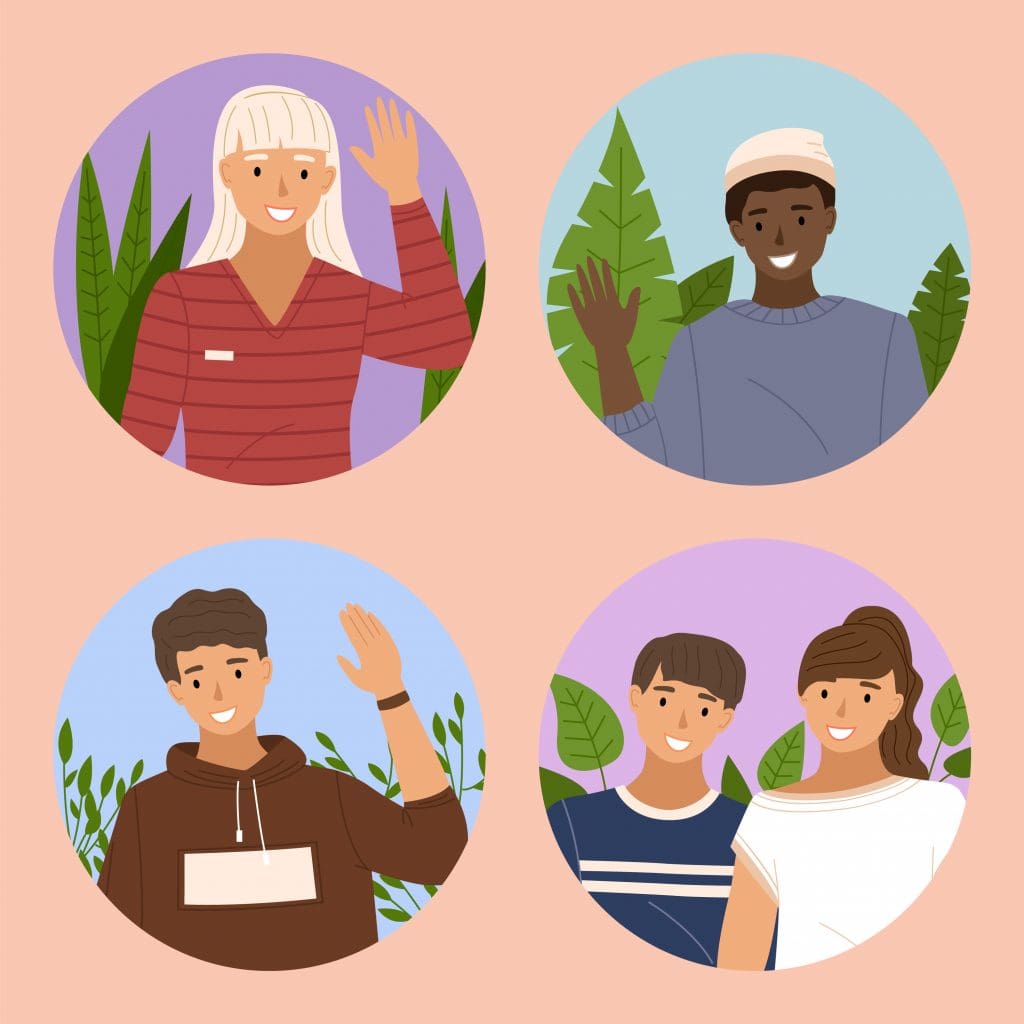 There are two ways you can say “good morning” in Japanese.

The first way is おはようございます (ohayou gozaimasu). It is a formal way of greeting someone “Good morning”.

おはよう(Ohayou) is another way of greeting a person good morning. However, it’s an informal greeting that has an equivalent meaning to “Morning” in English.

こんにちは(konnichiwa) is a phrase used by Japanese people to say “Good afternoon” or “Hello“. This can be used in a formal or informal setting.

Nice to meet you in Japanese

The word はじめHajime means beginning or start. The phrase はじめまして(Hajimemashite) can be translated as “How do you do?”. It is usually the first phrase that one says when introducing oneself in Japan. It literally means “I am meeting you for the first time”. It’s the same Japanese phrase you’ll use if you want to say to someone “Nice to meet you”.

You may also bow as you say this phrase. Japanese people have also adopted the Western style of handshake so you may do a handshake instead of a bow when saying this beginning phrase for self-introduction.

Saying your name in Japanese

There are three standard ways how you can say your name in Japanese. You can choose from any of the three below depending on the situation and occasion of your introduction. 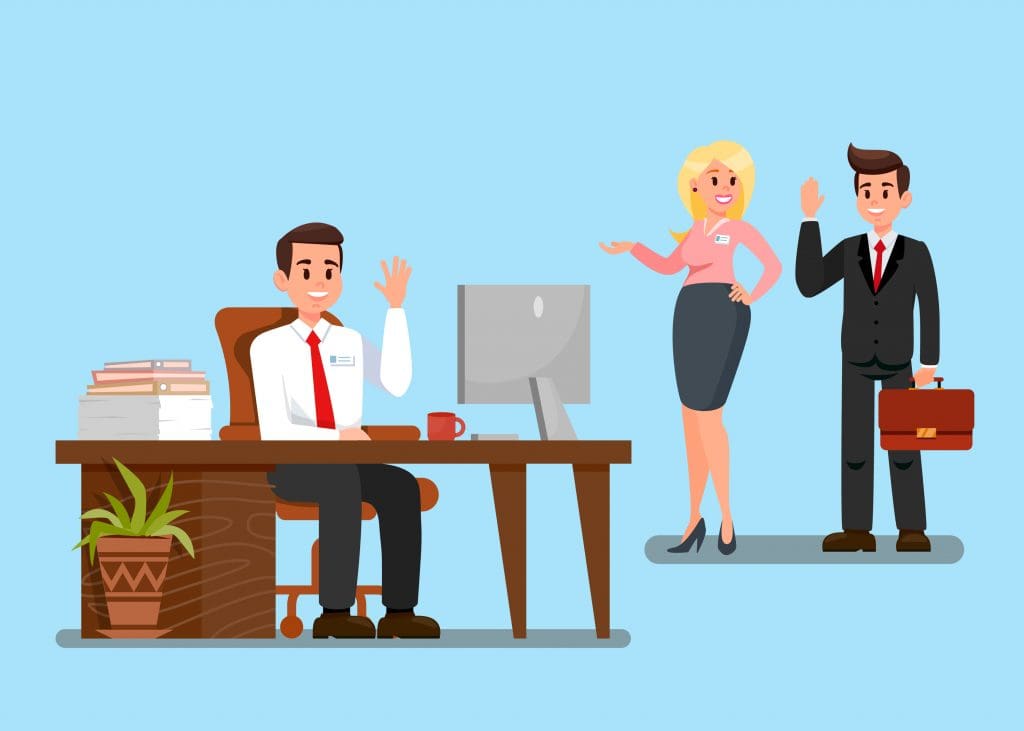 “I am” in Japanese

One way to introduce yourself is by saying your name. You can usually say it with “I am” plus your name.

です(desu) at the end of a sentence signifies politeness. Thus you’ll use the following sentence pattern:

This sentence pattern is one of the standard forms for saying your name.

I am John Smith.

“My name is” in Japanese

Another way of saying your name is by using “My name is.”

In order to complete this sentence, you’ll use the following sentence pattern:

My name is John Smith.

“I am called” in Japanese

This phrase is more formal and expresses humility when introducing oneself. It is usually used when you are introducing yourself to someone of higher rank/status.

ともうします (tomou shimasu) is usually placed at the end of the sentence. When using it, you should use the following sentence pattern:

I am called John Smith.

When saying your name informally or in a casual way, you can use です (desu).

This means you can simply state your name and add です (desu).

This sentence pattern can be translated as “I’m” in Japanese.

This way is often used when you are introducing yourself to someone of the same age or status such as friends of your friend or in an informal occasion or meeting.

Saying where you’re from in Japanese

There are many different ways of saying where you’re from. Some of them depend on how polite or casual you’d like to say it. 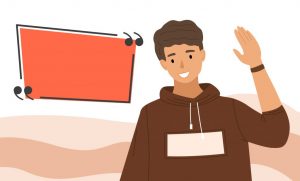 からきました is used when telling someone where you’re from. This phrase is made of 2 words which are から meaning “from” and きました form the word きまし meaning “to come”. からきました literally means “I come from”.

To use this phrase, you’ll use the following sentence pattern:

からきました(Kara Kimashita) means I am from. This standard way is the most often used in self-introductions in Japan. It is considered a simple and polite way of telling others where you are from.

This Japanese phrase consists of 2 words: から and まいりました. As mentioned earlier から means “from”. まいりました (mairimashita) is from the word まいりまし (mairimasu) whose dictionary form is まいる (mairu) meaning “to come”. まいる is the formal word for “to come”.

To use this phrase, you’ll use the following sentence pattern:

からまいりました(Kara Mairimashita) is a more polite way of saying “I am from”. This way is often used when you are doing your introduction to someone of a higher rank/status. It is a more polite and humble way of telling people what country or place you are from.

If you’d like to say where you’re from in a casual way, you can simply say your country, city, or hometown’s name and add からです.

からです(kara desu) is an informal way of saying “I am from”. It is often used when you are introducing yourself to someone of the same age, status, or rank in society.

すんでいます (sunde imasu) means “I live in”. It is usually used when you are introducing yourself in a less formal environment/event.  You can use this phrase using the following structure:

I live in New York.

I live in Tokyo.

This Japanese phrase comes from the word すんでいる (sunde iru) which means “to live”.

The word しゅっしん (shusshin) literally means “origin” or “hometown”. The phrase しゅっしんです (shusshin desu) means “my hometown, birthplace, or place of origin is”.

It is another formal way/polite way of saying where you are from. It is usually used when you are introducing yourself to someone older or someone in a higher rank/status in a company or school setting.

When using this to say about your hometown, birthplace, or place of origin, you’ll use the following structure:

My hometown/birthplace/place of origin is Madrid.

I am an international/foreign student.

My major is Japanese./ I am majoring in Japanese.

In the above examples above, the words りゅうがくせい means “foreign student” and せんもん (senmon) means “major” or “the area of specialization in one’s studies in Japan”.

Other せんもん (senmon) or majors in Japanese are the following:

The phrase どうぞよろしくおねがいします (Douzo Yoroshiku Onegaishimasu) formally ends your Japanese self-introduction. It can be translated as “nice to meet you or pleased to meet you” however its literal translation means “please be good to me/please take care of me”.

This ending phrase is very important because signifies that you are putting yourself in the care of the person to whom you have introduced yourself. The Japanese would often respond with a repeat of this phrase. Thus, this phrase signifies the start of a good relationship.

Is it rude to shake hands?

When meeting someone, shaking hands is uncommon or rather unusual among Japanese. They normally bow to greet each other.

Nowadays, as more and more foreigners are visiting or living in Japan, the Japanese are making exceptions for ways to greet someone. Shaking hands is acceptable and isn’t rude, especially in a business setup.

Good luck with your self-introduction! Ganbatte ne! がんばってね！Do your best!