“Japan” in Japanese – Everything to learn about 日本 (Nihon)

You might be used to saying “Japan,” referring to this country, but “Japan” in Japanese, which is used by native speakers, is a little different.

When you set foot in a new country, you might have questions about how things work there. What’s the unit of currency? Do they drive on the left or the right? What’s the proper etiquette for business meetings? 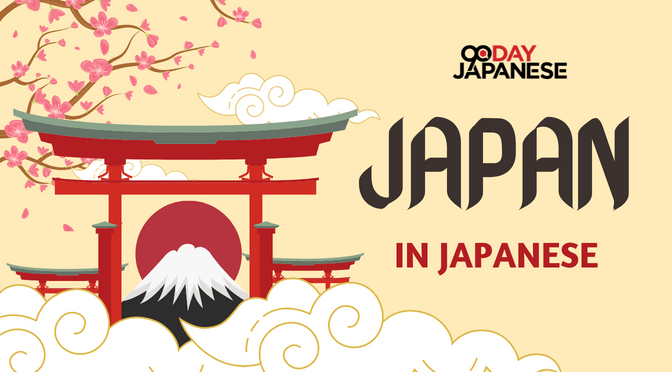 If you want to ask someone those questions in their native language, you’ll need to know how to say the name of the country so you can ask what makes this place unique. We’ll teach you all about that here!

What is the Japanese word for “Japan?”

The term for “Japan” in Japanese is ほん (Nihon). The correct pronunciation for this is to emphasize the second syllable, or “nee-HOHN.” This is an easy word to pick out in conversation or in written material, which is why the name of the country is a great starting point when learning both kanji and spoken Japanese.

Japanese people don’t refer to their country as “Japan.” This is what is known as an exonym, a name given to a place by outsiders. It is quite common for those from other countries to have a different name for a place that sounds more like their own language.

Japan is called “Japan” in English and some other languages but is referred to by other names in different languages. Here are a few examples.

Similarly, the Italian cities of Venezia, Firenze, and Napoli are called Venice, Florence, and Naples in English. There are many languages with other terms used to say “Japan,” but we’ll focus on its Japanese term in this article.

Of course, locals are very familiar with the word “Japan,” and they know that’s how you know their country, so when speaking to you in English, that’s what they’re likely to call it.

You’ll also see it written on a lot of signs in English, and anyone you say “Japan” to will understand what you’re talking about. However, if you want to speak the local language properly, you should use “Nihon.”

Whether it is “Nippon” and not “Nihon,” there actually isn’t a proper answer to this. Both have the same meaning (usually translated as “where the sun rises” or “Land of the Rising Sun”), and you may hear both during your time in this great country. It is common for students to learn “Nihon,” as this is the most commonly spoken pronunciation.

However, the other is just as valid. Nippon is usually used for official matters, like international sporting events where putting emphasis on national pride is important. One of the largest Japanese carriers, All Nippon Airways, uses Nippon.

Keep your ears open, and you may notice patterns as to when people use this secondary spelling, but when in doubt, stick with the word “Nihon.”

How to write “Japan” in Kanji

The word “Japan” in Japanese, which is “Nihon” is written in kanji using the character 日, which means “sun,” and the character 本, which means “origin.” Combining these, it forms 日本 (Nihon), which literally means sun origin. This also explains why Japan is often referred to as the Land of the rising sun.

If you see these characters in this order on a sign, they’re referring to the country. You’re also likely to see them paired with other characters. As a useful example, let’s cover how to say the term for the Japanese language.

How to refer to the Japanese language in Japanese

The term for the “Japanese language” in Japanese is にほんご (日本語  | Nihongo). You can form this with the name of the country paired with ご (go).

Why is it important to learn the word 日本語 (Nihongo)?

Memorizing this kanji can be useful in many situations. Before you even leave your hometown, you may look online for a restaurant in Tokyo and find that the entire website is in the Japanese language, so you can’t read it. But if you see 日本語 at the top, it indicates that this is the spot to click on to change the language of the website.

Being able to say and correctly pronounce the term “Japanese” is also useful when you want to let someone know whether you speak the language or not. If you don’t say anything, they may assume you don’t know any Japanese, and if you try to speak it without warning them, they may assume you’re fluent.

Speaking Japanese with the locals

One thing that sets Japan apart from some other countries in the world you may have been to is that while there are a lot of people there who speak English, the locals won’t be as used to travelers trying out basic Japanese on them.

For instance, a lot of Americans who study French and Spanish visit France and Spain, so the people there are used to visitors trying out their basic vocabulary.

In Japan, visitors usually either know the language fluently or not at all, so don’t be surprised if you try your Japanese out on someone in a store and they go way too fast and use words you can’t comprehend. They’re doing their best but aren’t used to speaking their language with new learners!

As important as learning the kanji above, it’s also good to know how to communicate with locals or native Japanese speakers. Telling someone how much you’ve learned will help let them know your needs when communicating.

How to tell someone about your knowledge of Japanese

Below are some sentences that you can use to express how much Japanese you know. Setting this expectation with someone you’re speaking with can make communication a lot smoother.

How to tell someone they are talking too fast for you

If you run into that situation, here are some ways to indicate that you need a little extra help.

Now you know how to say “Japan” in Japanese! More than anything, you just need practice. Learning Japanese words and phrases is fine, but navigating the actual Land of the rising sun requires you to think on your feet because you won’t have time to look up every word you don’t know.

An important skill in language learning is figuring out how to use what you do know to communicate, which is why conversing with native speakers is an essential part of the journey to fluency.