Japanese adjectives – All about descriptive words

Every person learning Japanese must master Japanese adjectives sooner or later, so that’s what this article is all about! 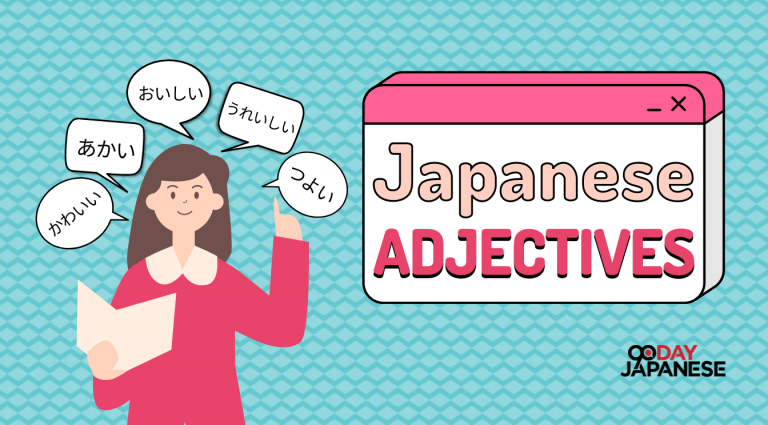 Here we cover the different types of adjectives in the Japanese language, how they are conjugated, popular words, and more. With these, you can easily describe people, objects, and nouns in general. Find the section you need to work on and get that brain working!

What are Japanese adjectives?

As mentioned above, adjectives are used to describe nouns. They add color and emphasis to any language. They are also one of the first learning points for all students who study Japanese.

The Different Types of Adjectives in Japanese

There are two different types of adjectives in the Japanese language. And while they are distinctly different, for the most part, they behave quite similarly. To add, there are almost no exceptions regarding the different Japanese adjectives and their usage – yay!

So here are the two categories of adjectives in the Japanese language and how to tell them apart!

い (i) Adjectives in Japanese

The first kind of Japanese adjective is known as い (i) adjectives or “true adjectives.” い (i) adjectives end in the character い (i) in their base or plain form, so they are easy to spot. But there is one exception here: there are no い (i) -adjectives that end in えい (ei)!

For example, the word きれい (kirei) is a very popular adjective that means “pretty/clean.” Since it ends in えい (ei) instead of just い (i), it is considered a な(na) adjective instead!

The other type of Japanese adjective is known as the な (na) adjective. These adjectives can end in several characters or sounds. Generally, all adjectives that do not end in い (i) are な-adjectives.

They are called な (na) adjectives since they always end with the character な (na) when preceding a noun, which we’ll talk more about later.

A predicate is a part of a sentence that modifies the subject in some way. In other words, predicates state what the subject is or does.

Japanese adjectives act as predicates (unlike English adjectives) and, therefore, conjugate in a similar fashion to Japanese verbs. This makes learning adjectives in the Japanese language a little tricky for native English speakers, but you get the hang of it in no time!

Here is a chart demonstrating all the conjugations for Japanese adjectives. Let’s start with the い (i) adjective やすい (yasui | 安い).

Note: There are other ways to create the negative forms of these adjectives, but they are far less common and thusly not included.

When Japanese adjectives function as the predicate of a clause, they will appear at the end of a sentence and seem more like a verb than on any other occasion. Here are some example sentences:

That man was stingy

Here, the adjective ケチ (kechi) comes at the end of the sentence and describes the man, 男 (otoko).

In this example, the adjective ひろい (hiroi) comes at the end and is describing the car, 車 (kuruma).

The Rules for Conjugating Japanese Adjectives

The chart above can be a little tricky to grasp for first-time learners. Here are the conjugation rules for Japanese adjectives spelled out for you!

Negative – drop the final い (i) and add くない (kunai)

Past negative – drop the final い (i) and add くなかった (kunakatta)

Past – add だった (datta) or でした (deshita) to the end

Simply add です(desu) to the endings to form the polite version of these adjectives (aside from でした | deshita).

There are a few tricky adjectives that always give Japanese students a run for their money – here they are, and here’s how you can master them quickly!

This Japanese adjective よい (yoi | 良い) is another reading for the adjective いい (ii) which bears the exact same meaning – good. Both よい (yoi) and いい (ii) mean “good” in the Japanese language and are interchangeable. Thusly, they follow the same conjugation rules:

Other than its tricky conjugation, this adjective functions exactly like all other い-adjectives!

You’ve more than likely come across this word at some point while listening to Japanese. かっこいい (kakkoii) translates most closely as the English slang word “cool” [i.e., “that movie was really cool”] but can also mean “handsome.”

What makes this word tricky is that it’s actually the combination of the words かっこ (kakko) and いい (ii)! We’re not sure what かっこ (kakko) means in this case, but the いい (ii) is the same one we just went over! For that reason, the ending of this adjective will conjugate just like いい (ii) conjugates.

It’s the only い-adjective that follows this pattern, but it’s worth being aware of.

Another very popular Japanese adjective, かわいい (kawaii | 可愛い), means “cute” or “adorable.” And while it looks similar to the adjective above (they both end in いい), it is indeed different. The first い in かわいい comes from the kanji 愛, which reads わい (wai) in this word.

Of course, just like in English, Japanese adjectives are used to modify or describe Japanese nouns. When they modify nouns, they come directly before the noun they modify.

For な (na)-adjectives, the character な *(na) is placed after the present form/base form of the adjective that comes before the noun. Check out these examples:

He has a healthy body

*すき(suki | 好き) is a rather special adjective that is used to say when something is “liked” in Japanese (unlike English, which considers “to like” as a verb). Therefore, although すき (suki) does qualify something as “likable,” it is more commonly used to say what someone likes:

Some な (na) -adjectives can actually be used as nouns at times. For that reason, these Japanese adjectives are also called “adjectival nouns” or “quasi adjectives.” These concepts are somewhat abstract and can take the role of either a subject or object within a sentence.

Peace is the most precious thing of all

Freedom must be protected!

Aside from the normal conjugative endings, several other endings can be used with Japanese adjectives to form different meanings. Many of these endings can also be used with verbs, so the worth of remembering them is twice as valuable!

Here are some popular adjective endings in Japanese you might want to learn with some example sentences!

The structures くて (kute) / で (de) are used to connect adjectives together or to another clause within a sentence.

な (na) -adjectives – we simply add で (de) to the end of the adjective.

The amusement park was fun and cheap.

That entrance exam is important, and I studied my hardest.

“Too much” in Japanese

To say that something is too much of (insert adjective), we must use the ending すぎる(sugiru | 過ぎる) with our Japanese adjectives.

This candy is too sweet.

The price was too high, so we went to check out another store.

くなる(kunaru) / になる(ni naru | 成る) is the form we use to say that something has taken on or become a quality. The latter of these two suffixes can also be used for all regular nouns (not just adjectival nouns)!

It suddenly got cold.

The suffix そう(sou) is used to say what something seems like. This is a more advanced Japanese grammar point that carries some nuance, so be sure to practice it sufficiently!

While looking out of the airplane window, I thought to myself, “this looks like a busy city.”

Look at how in the sentence above, the な comes at the very end of 賑やかそうな. This sentence can also be written as にぎやかなまちそうだな～… Both carry the exact same meaning!

Also, as you may have noticed, both すぎる(sugiru | 過ぎる)  and なる(naru | 成る) are independent verbs that can be used on their own without any adjectives. なる (naru), in particular, is a very commonly used Japanese word. Therefore, these verbs follow their own respective conjugation rules, even when they come after an adjective!

And finally, here is a list of the best Japanese adjectives every student should learn! The adjectives are divided into categories to make studying them even easier – enjoy!

Below are adjectives used to describe size & weight.

When referring to how someone feels, you can use the following adjectives.

When talking about how many or how much something should be, the adjectives below can be used.

*たくさん (takusan) is neither an い-adjective nor な-adjective, although it is an adjective. It cannot be conjugated and is connected to nouns or verbs either with the particle の (no) or with nothing at all. Some colors have the same exception.

Another common adjectives are colors. Here’s what they are called in Japanese.

Lastly, below are the descriptive words used when talking about an object or a person’s characteristics.

**This Japanese word for cold is used to talk about cold things/objects only. If you want to say that the weather is cold, you must say さむい (samui | 寒い)

Great job in completing this lesson on adjectives! Hopefully, you’ll know how to use these descriptive words. Throw in some example sentences that you can form with these words in the comment box below!

If you’re still up for some lessons, why don’t you learn Japanese words next?