Japanese Alphabet — All about the three writing systems

The Japanese Alphabet. What do you know about it? How many letters does it have?

English, the world’s most spoken language, has 26 letters. Sanskrit, one of the world’s oldest languages, has 46 letters. But how about the Japanese language?

Today, we’ll present all of them to you. If you’re wondering where and how to start learning Japanese, it’s your day! Let’s get started! 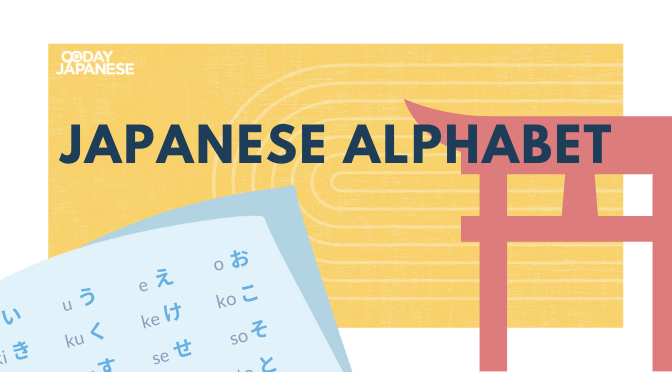 The Japanese alphabet has three series of alphabets. All of them are essential in the Japanese writing system.

In this guide, we’ll cover the three Japanese alphabets (hiragana, katakana, and kanji) that will help you read, speak and write in Japanese.

The Japanese alphabet hiragana and katakana have 46 Japanese letters each. Kanji has over 2,000 letters, and sounds vary from each Kana. In spoken Japanese, each Kana can represent all of the sounds.

Hiragana characters were developed by mimicking the cursive script of Chinese characters called そうしょたい (soushotai | 草書体) about 1,200 years ago. Hiragana composes words, suffixes, people’s names, and so on.

The Hiragana alphabet has 46 letters in it. Learn all of them in the Hiragana chart below. You can practice writing them on separate sheet of paper. 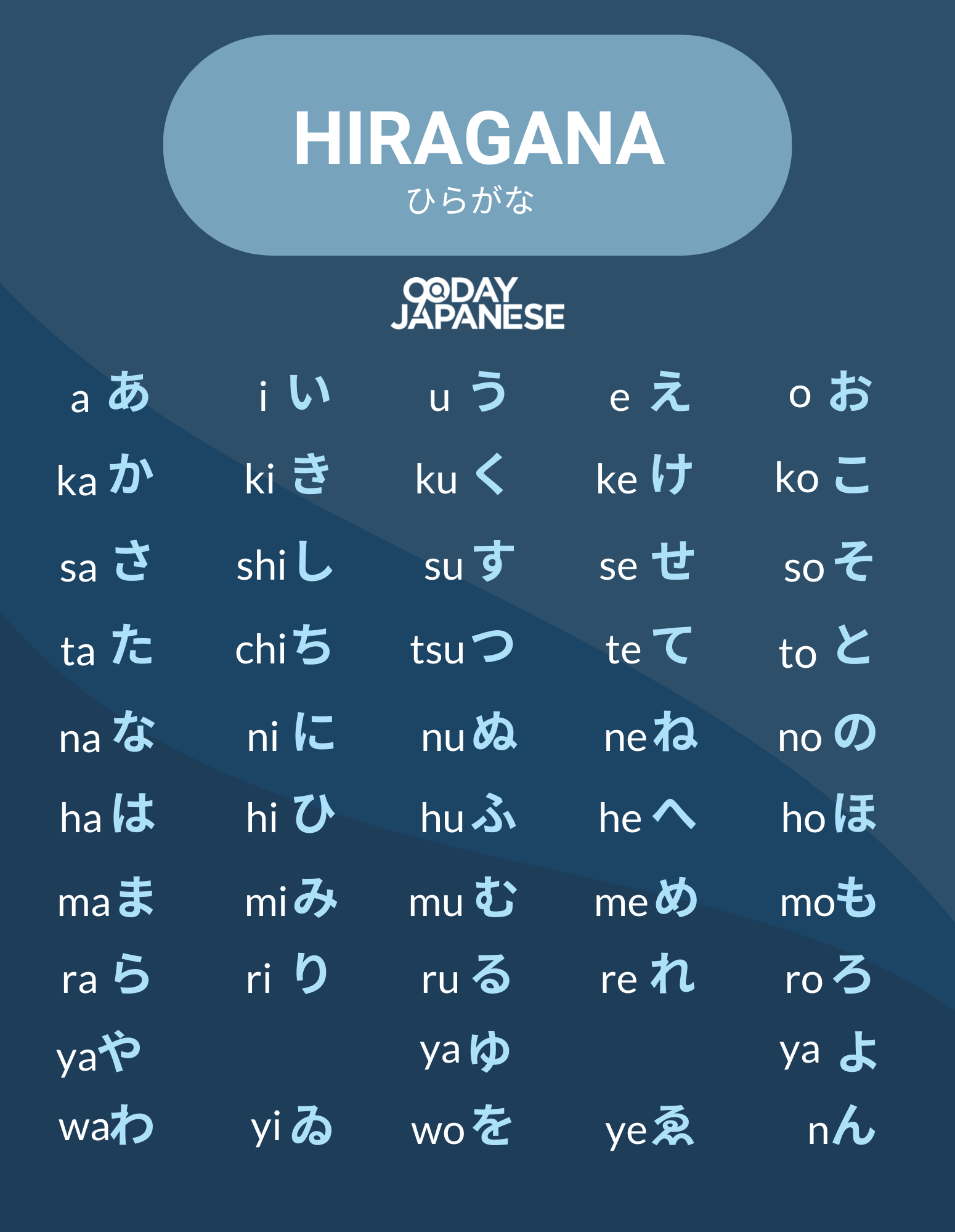 *Among the hiragana characters, ゐ (yi) and ゑ (ye) are no longer used.

Katakana (カタカナ | 片仮名) characters come in the second order you should learn in the Japanese writing system. Katakana literally means fragmentary Kana characters, and they were created after hiragana. People regularly use katakana to describe foreign words, foreign names, loan words, and onomatopoeias.

Some English speakers might feel funny when they encounter words borrowed from English or other foreign languages.

The Katakana alphabet has 46 letters similar to Hiragana (ひらがな). Here’s the Katakana chart for you. You can practice writing them on a separate piece of paper. 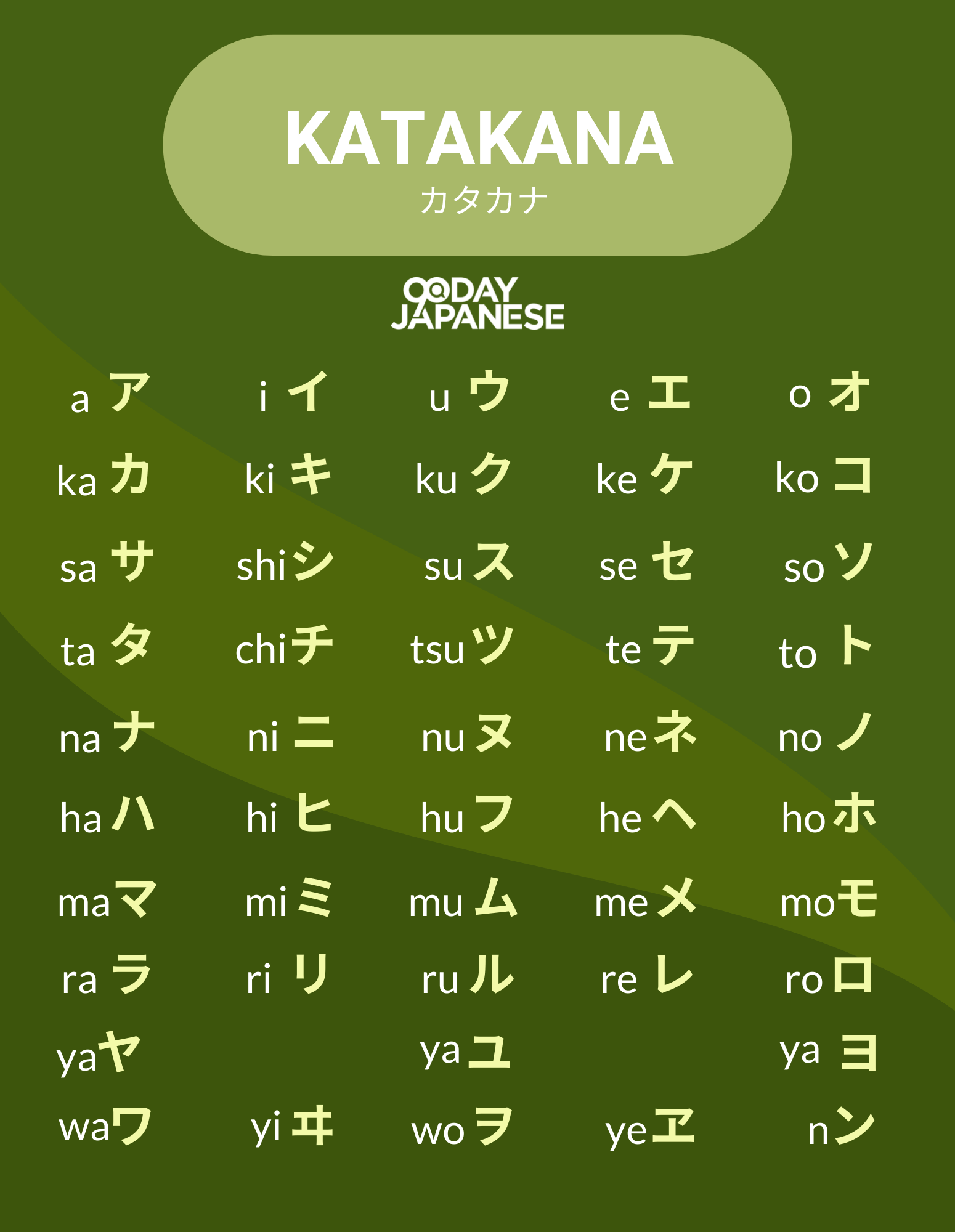 *Among the katakana characters, ヰ (yi) and ヱ (ye) are no longer in use.


Get Free "Thank You in Japanese" PDF

Kanji (かんじ | 漢字) is the Japanese writing system that originated from the Chinese Hanzi characters. Kanji characters have the widest variety among the three Japanese alphabets. Allegedly, the total number of Kanji could be more than 10,000 letters, though Kanji doesn’t have a particular order like the hiragana and the katakana chart.

There are usually two ways to read each kanji: onyomi (Chinese origin) and kunyomi (Japanese origin). If you know Mandarin Chinese characters, you’re ahead of the game! You just need to learn how to write the other two, hiragana and katakana.

A single character can already mean one word. Fascinating, right? Well, kanji is probably the most challenging yet most fun part of learning Japanese. You’ll definitely recognize a kanji character when looking at a Japanese word.

How can I learn Kanji and the Japanese Alphabet?

If Japanese is a new language for you, learn both hiragana and katakana, then progress to Kanji is a way to go. Knowing the Japanese alphabet might not seem essential for speaking and listening, though it’s unavoidable in reading and writing.

A path to complete 3,000 Kanji might feel like a long and winding road at the moment. Although, there is some good news for foreign learners. Let us introduce you to some suggestions.

Do you have no idea about the three writing systems? Don’t worry. The romanization of Japanese called ろーまじ (romaji | ローマ字) can be an excellent companion to learn Japanese naturally.

Romaji helps you to read and pronounce the Japanese alphabet without having advanced knowledge. Using Romaji, you can grasp the basic sounds and start practicing how to speak Japanese.

However, Romaji doesn’t indicate the meanings of Japanese words and sentences, so you still need to work on that part.

Do you have a favorite Japanese movie?

Making use of a reading aid

When you first learn Japanese, kanji often seems complicated when we first face it, but the reading aid called ふりがな (furigana | 振り仮名) or ルビ (rubi | るび) can show you the way to read.

Furigana is located above or next to Kanji usually. They don’t appear all the time, though it’s helpful to look up a new word in a dictionary or take a note of a new Kanji character. You can find them in children’s books, textbooks, and comics.

A text with Furigana

Learning one Kanji at a time

Written Japanese language always contains three combinations of the alphabet. So, elementary to intermediate-level language learners might get frustrated with not being able to read straightforwardly like other languages. Learning numerous Kanji characters might take time, but Kanji is full of astonishment. 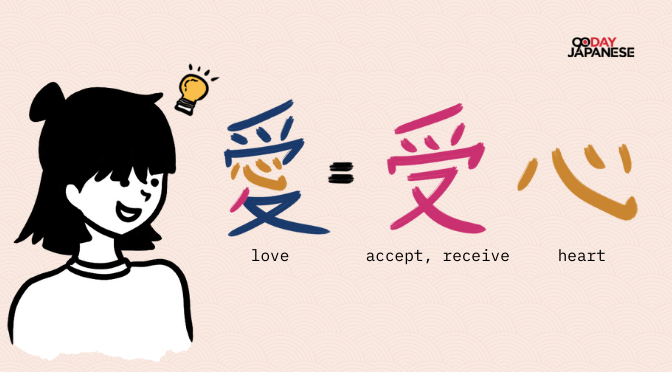 To learn Kanji, we recommend starting from radicals first and getting a picture of what a group of Kanji could signify. Kanji requires a lot of repetitions to memorize.

Kanji with multiple meanings and readings

Not always, but Kanji could have more than one reading よみ (yomi | 読み ). The original Chinese style reading is called おん(on | 音), and the native Japanese style is called くん (kun | 訓).

For instance: Kanji 楽 has about five ways of reading

For instance: Kanji 生 has about ten ways of reading

Learning the Japanese sounds and tones

Yet, the Japanese language has only five vowel sounds and fourteen consonant sounds, unlike English and other languages. Consequently, speaking and listening may not be too challenging compared to writing and reading Japanese.

Marks in the Japanese writing systems

You probably use them every day when learning Japanese but you have no idea what they’re called. These marks made the Japanese language more simple. Let’s talk about them below.

Dakuten and Handakuten are the modifiers for certain hiragana and katakana. Two tiny lines Dakuten is to express turbid sounds, and a small circle Handakuten is for the light puffed sounds.

Both of them need to be on the right top corner of the hiragana and the katakana characters and are colloquially called てんてん (ten-ten | 点々) and まる (maru | 丸). 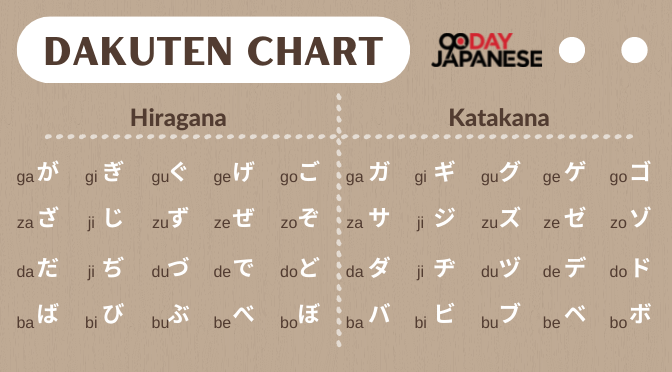 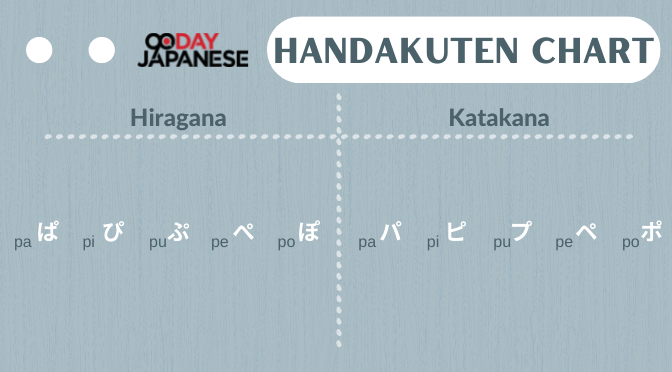 Letters for twisted sounds and staccato

Both are written in small katakana and hiragana and placed after a character. Youon has five kinds of characters, and Sokuon has only one. 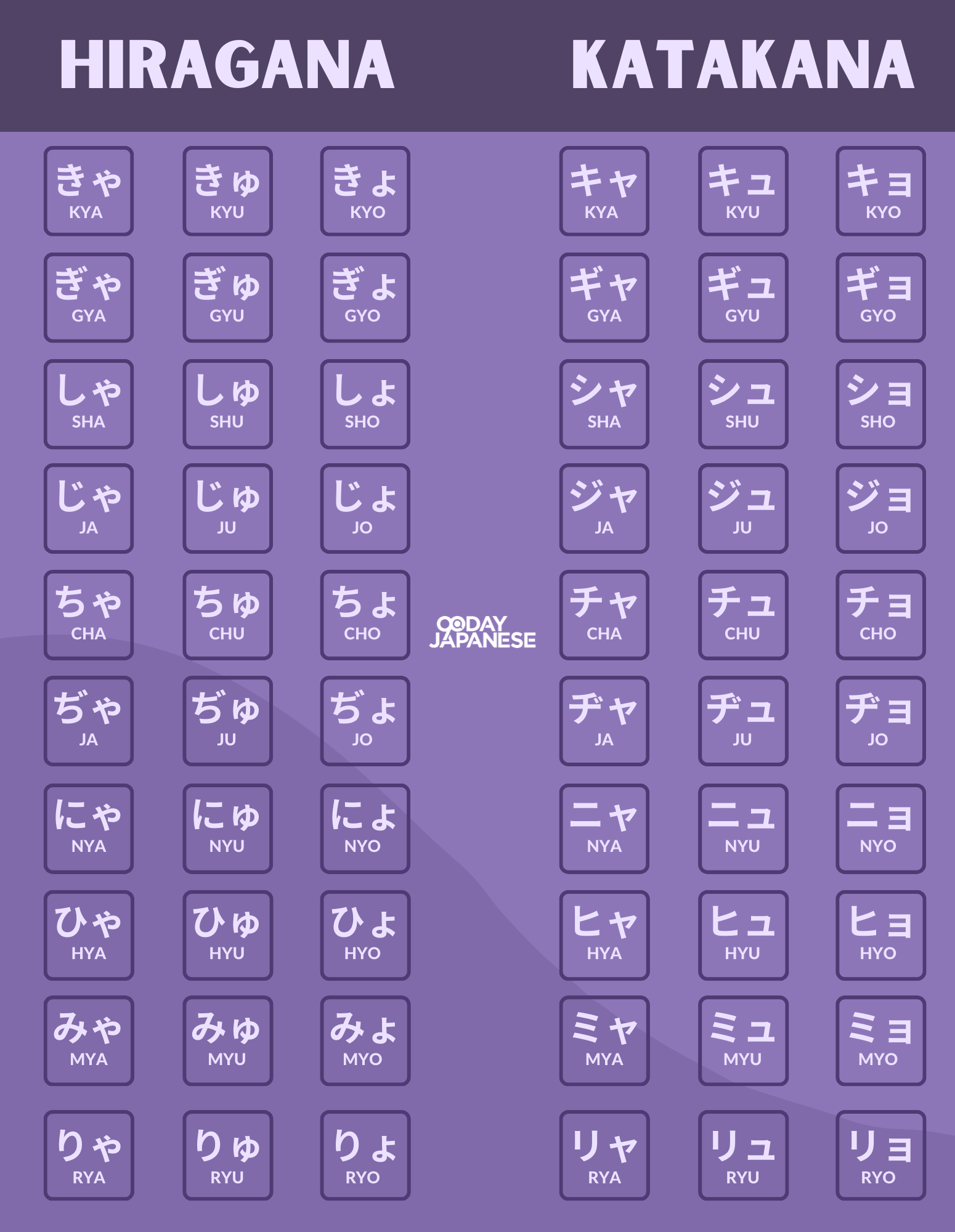 Long vowels are called ちょうおんぷ(chouonpu | 長音符) and written with the mark “ー”. Long vowels convey onomatopoeia, foreign words, and foreign names in katakana while borrowing the sound of an original foreign language.

When you learn a new language, it’s always fun to know some facts about it, right? Here are some fun facts about the Japanese alphabet (hiragana, katakana, and Kanji).

Hiragana, Katakana, and Kanji are all families

Here are examples of how each Kana was born from Kanji characters:

There are symbols not considered as a letter

There are about ten symbols called 踊り字 (odoriji | おどりじ) in Japanese. Odoriji can’t exist alone, so they are not listed as proper letters or grammatical elements. They don’t belong to any alphabet, but you can spot them in everyday life.

々: same as above or front

ゞ: to repeat hiragana with Dakuten

ヾ: to repeat katakana with Dakuten

〱: to repeat but valid only in the vertical writing system

The poetic and sentimental AIUEO song

Perhaps some of you remember that ABC songs helped us remember alphabets when we were children. In Japan, people have AIUEO songs instead of ABC songs. Yet, there are no singular AIUEO songs that everyone knows.

The classic and poetic song called いろはうた (iroha uta | いろは歌) is rather famous in Japan. It was written in Haiku style about 1,000 years ago, but still unknown who created it first.

Even the beautifully blooming flowers will soon fall because an end will come to everything. If we overcome this uncertainty and reach enlightenment, we should be able to feel at ease without having a fleeting dream anymore.

Japanese people use Romaji to type

Mainly, there are two ways of typing methods in Japan. One is Romaji input, and another one is Kana input. About 90 percent of people use the Latin alphabet or English letters over Kana with PC keyboards. 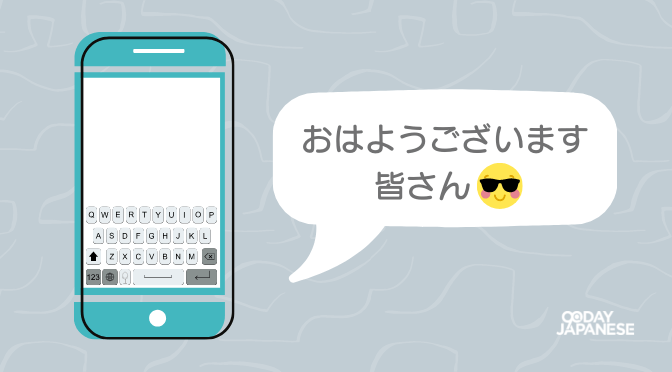 But somehow, multi-tap input and flick input using Kana are more common among mobile phones users. Both are the same in a way, and the only difference is how fast you’ll type.

Some Asian languages have tones, but the Japanese language does not. Japanese is a pitch accent language instead. Quite a few Japanese single Kanji words share equivalent sounds, so be aware of the differences in pitch accents when you hear and speak.

The word “Hashi” and “Kaki” can have multiple meanings by their sound. So, focusing on the accent will help you distinguish one from another. Accents should be on the underlined part.

It’s common among native Japanese speakers to get different impressions by how it’s written, even though three alphabets don’t exist to differentiate the nuance. 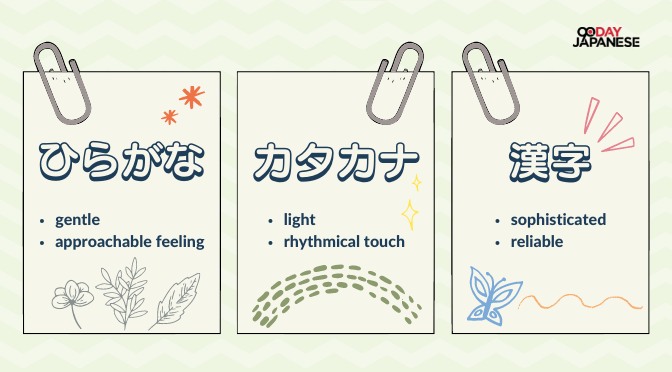 For example, hiragana gives a gentle and approachable feeling, and katakana adds a light and rhythmical touch. Kanji often leaves a little more sophisticated and reliable impression. Once you start feeling the contrasts, you should recognize yourself as reaching an advanced level.

The following sentences are “The sunset is very beautiful” and identical in English. However, native Japanese speakers might sense something.

Here is what native Japanese might sense from these contrasts.

夕焼けがとても綺麗だ: The sunset probably brought back a nostalgic memory.

夕焼けがとてもキレイだ: This person could have felt refreshed after seeing the sunset.


Get Free "Thank You in Japanese" PDF

Learn the Japanese alphabet and discover more about Japan

When you’re interested in the Japanese culture, it makes you want to learn their writing systems, right? Reading and writing all three types of the Japanese alphabet is a significant accomplishment! So grab a notebook and start practicing now. Keep it simple — begin with a common word and hiragana characters.