A question for the reader: what are your favorite Japanese anime phrases? Probably everyone reading this introduction was first introduced to the Japanese language through exposure to Japanese anime. 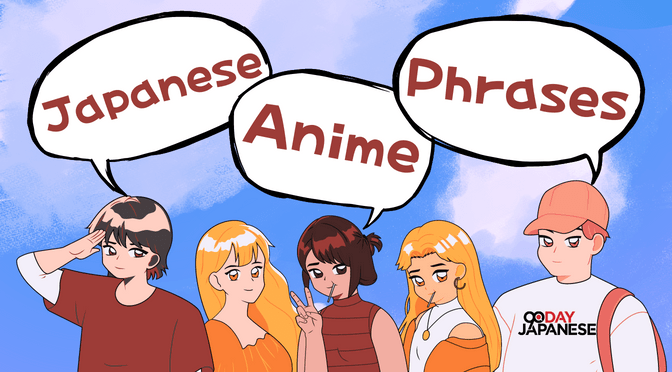 These hand-drawn, computer-generated Japanese animations or “cartoons” were wildly successful, so much so that they became commonplace to western children throughout the world. And needless to say, anime would not be anime without its very distinct anime way to speak Japanese.

Today’s article is all about anime phrases, what they are, and how they differ from standard Japanese. Grab a seat and enjoy the ride!

Let’s be clear – how anime characters speak is not how native Japanese people communicate with one another! That’s true for the most part, anyway. And that’s the reason this article exists in the first place!

Some anime are very mature and standardized, reading as a real-life film or TV drama would. Other anime may be more fantastical but still, use realistic-sounding dialogue throughout. These anime are great to study if you’re looking to polish up your Japanese communication skills.

Other anime (and definitely the more popular anime) use a very specialized style of Japanese, pretty much only found in anime and manga (remember, most anime come from a manga original.)

If you’ve been using the Japanese words you’d learned in anime to communicate with your Japanese friends, be warned! – there is a big difference between anime-Japanese and real-world Japanese!

While almost all Japanese words found in anime are real Japanese words, their usage, placement, combination, etc., get repurposed for the sake of the anime art style.

With our introduction out of the way, here are the most popular anime phrases to be on the lookout for during your next Pokemon binge-watch (or whatever anime you adore!) We make sure to point out all the anime-exclusive words in this list as well!

Watching anime is a great way to learn Japanese, but it’s essential that you triple-check any new expressions before making them a part of your daily vocabulary. For the most part, popular anime characters speak in a very shorthanded, slangy, “cartoonish” way – real people just don’t speak that way!

But on the other hand, anime is written in Japanese and cannot escape from its mother tongue. The best parts from which to learn Japanese in anime are the serious dialogues, usually the ones explaining a situation or plot.

And if nothing else, listening to anime is a perfect way to train your ears for Japanese. Try to pick up as many words as you can as you go along (especially the words from this list!)

What are the Different Types of Anime?

As you go down the well of entertaining anime as you’re studying Japanese, you’re sure to come across quite a few styles of shows. In fact, there are many anime genres, just like books or films. Each genre targets a specific audience, which may change how frequently certain expressions will appear or how words are formed in general.

Here are the different types of anime, along with some context on their styles.

This is by far the most popular form of anime and probably what you’ve seen the most. 少年 (shounen) is targeted toward young boys and male teens. Typically, they’re action-packed and intense, and the main character is a male.

For that reason, expect to hear (usually) a more boyish or brattish form of Japanese in these anime with a cool and charismatic flare. Of course, that doesn’t go for every anime character, however!

Some popular 少年 (shounen) examples are Dragon Ball, Naruto, and One Piece.

Quite the opposite of 少年 (shounen), 少女 (shoujo) anime is targeted toward young girls. These anime are also very popular and are based on romance and relationships instead of high-paced action (for the most part). In this genre, the protagonists are female characters.

Expect to hear a gentler, innocent, and more feminine cadence of Japanese in these kinds of shows. Some popular examples include Sailor Moon and Vampire Knight.

青年 (seinen) anime are very similar to 少年 (shounen) in that their plots, themes, and interests points are the same, but they tend to be more intense. For this reason, they are targeted toward young adult males.

You can expect a lot more gore and violence in this genre of anime, as well as more convoluted psychological aspects. There are plenty of good 青年 (seinen) comedies out there too.

Gantz, One Punch Man, and Ghost in the Shell are great examples of this genre.

Here is the counterpart to 少女 (shoujo) anime. This genre is geared toward adult women. It carries all the same themes as 少女 (shoujo), but with a healthy dose of harsh reality. Expect to explore heavy topics like infidelity, sexual assaults, and even eroticism. The language will follow suit, so get into this for some very somber studying.

Normally the protagonists here are female, but they can also be male. Anime like Paradise Kiss, Honey and Clover, and Loveless fall under this umbrella.

This genre of anime is targeted toward young children. The series here is innocent and fun and usually provides some moral lessons in each episode. After all, they are purposed to make good people out of young viewers!

Expect fantasy and imagination in 子供向け (kodomomuke) and childish language (or, at the very least, nothing overly crude.) And protagonists can be a number of things, from boys to girls to animals!

Note: These are the most popular genres of anime – we bet you noticed many of the titles we mentioned above – but they are not the only genres.

How many of the common phrases above are you familiar with? Remember, most of the phrases from anime and manga aren’t actually spoken in Japan. However, they’re fun to learn about, and you’ll recognize the words and phrases the next time you watch an anime (even without subtitles)!

How about learning about Japanese culture next? We have an article dedicated to it here!