Japanese Consonants – A brief introduction to get you started

In this Japanese grammar lesson, we will learn about Japanese consonants.

Taking the time to master consonants is totally worth the effort since pronunciation and fluency are based first on understanding the dance of any language. So let’s dive into what are the ABCs in Japanese and then work our way up from there! 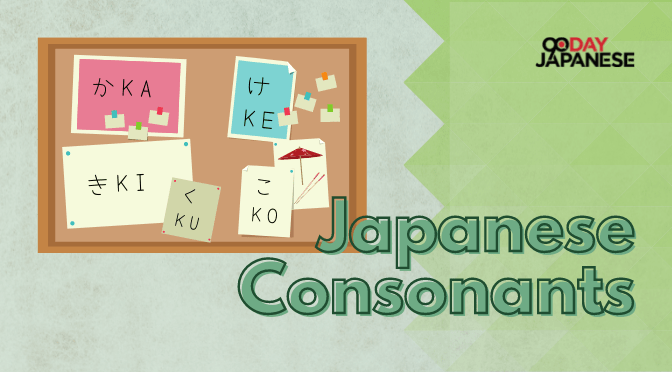 How many consonants are there in Japanese?

Beginning with this question, including the special consonant, the Japanese language has a total of 19 basic consonants. There are more when certain consonants are combined to form combined sounds. We’ll go over them a bit later.

To put it quite simply, a syllabic language system implies that consonants are always (or almost always) paired with a vowel to form sounds that form words. Meaning in most cases, you’ll just need to know the consonant-vowel pair pronunciations. Unlike the English language, there is no “th” or “sw” in the Japanese language system.

The chart below groups the characters into two categories: consonant sound on the left column and vowel sound on the top row. It’s written in – ひらがな(hiragana), カタカナ (katakana), and ローマ字 (romaji):

All of these consonants must accompany a vowel. There are five vowels in the Japanese language. Here they are written from top to bottom in alphabetical order:

For clarity on the sound of each Japanese vowel, here are examples of English words on how to pronounce them in Japanese:

Each Japanese vowel is pure and never takes the form of diphthongs. In layman’s terms, it doesn’t change. They sound the same in every single word.

Special consonants are usually found in borrowed words. A combined consonant has a half-size version of the Y-sounds attached to the right. Let’s learn more about them.

Words (or even syllables) ending in consonants are not allowed in Japanese grammar, except for this hiragana character – ん(n). It is the only consonant in the entire alphabet that does not need the company of a vowel. The sound is most similar to the English letter “n” or a closed mouth “m,” kind of like a small moan. It appears either at the end of a word or followed by another vowel. For example:

Note: There are cases when the consonant ん (n) changes its sound. Here are some examples.

When ん (n) is followed by the letters B or P, it’s pronounced as the “m” sound. (konbanwa)

When ん (n) is followed by the letters K or G, it’s pronounced like the “ng” sound. (genki)

For each consonant combination along the い (i) line, a small や (ya), ゆ (yu), or よ (yo) can be added to form a combined sound. Using Katakana when combining double consonants is also needed for loan terms. Here’s an example of what that’d look like: 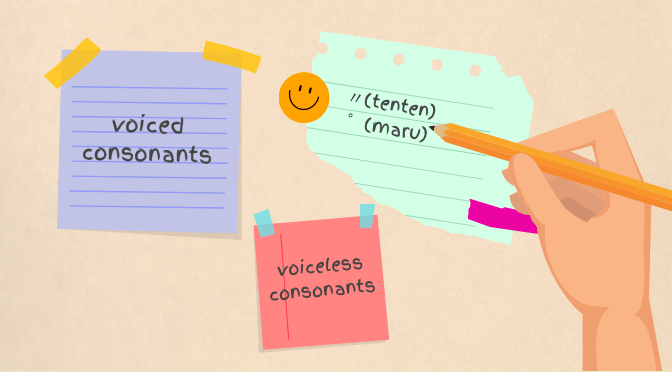 Want to know about consonant sounds? When you learn Japanese, it’s important to understand how they sound. Each Japanese consonant belongs to one of these two categories: voiced and voiceless consonants.

These consonants require a “voice” and necessitate a greater vibration from your throat. These include “g,” “b,” “d,” “j,” “r,” “n,” “m,” “w,” and ”z.” Japanese Voiced consonants include all てんてん (tenten) converted consonants. The letter “p” lies somewhere in the middle, which is why it carries まる (maru) exclusively.

This information is rather textbook and won’t come to mind as you learn to navigate your way through pronunciation – with enough practice, the sounds begin to just come naturally. But there are some other tricky points to the Japanese pronunciation of consonants that are worth mentioning!

Some consonants have been omitted from the chart above due to their special relationship with other corresponding consonants. Namely, those consonants would correspond to the English letters G, Z, D, B, and P. To create these sounds, we need to add either two dashes, てんてん (tenten), or a circle, まる (maru) to those previously mentioned.

These two symbols are used exclusively for this conversion of sound and can be thought of as a part of the Japanese alphabet. They are always placed to the top right of the characters. They’re only used when writing the hiragana and katakana characters. Here are the rules for 〃(tenten) and ゜(maru), using the vowel あ (a) as an example:

There is also the consonant J which is achieved by adding 〃 (tenten) to these characters:

It’s unlikely to see the character ぢ used to represent the sound “Ji” in the Japanese language, as じ is almost always used instead. If you wanted to write the character ぢ using an English-Japanese keyboard, you’d type the letters “di.”

Note: Sometimes, づ is transliterated as “dzu” or “du.” While the sound does mostly resemble “dzu,” you may find it taught in schools or in books as simply “zu.” To achieve this character when using an English-Japanese keyboard, you’ll almost always type out the letters “du.” The characters ぢ (ji) and づ (zu) are currently considered obsolete and are only seldom used.

Although it appears in the H line in the alphabet, the character ふ sounds more like “fu” than anything else when you pronounce it. Honestly, the sound is somewhere between an H and an F – just listen closely to native speakers pronouncing this character, and you’ll see what we mean.

Does the Letter L Exist in the Japanese language?

Oddly enough, in school, the alphabet line R is taught to be pronounced more similarly to the English letter L. Yet when speaking in person, the sound of “R” comes across much more clearly.

Since there are technically no romanized letters in the Japanese language, we’d say that both L and R are common sounds. In case you hear a crossover or in-between of the two letters from Japanese people, just be aware that it is the same R-line in the alphabet.

To indicate a double consonant in katakana, use the small ッ(tsu).

Note: This doubler is never used before the N consonant. Instead, the character ん (n) is used as a natural doubler. Example:

こんな (konna), which means such (referring to something close to you)

そんな (sonna), which means such (referring to something a little far from you)

A consonant sound is made by blocking the air coming from your throat and mouth as you prepare to speak. Each consonant utilizes a specific combination of blockages depending on your tongue position as well as your lips, teeth, hard and soft palate, etc.

The four most important things to consider when making consonant sounds are where and how the sound is blocked, whether or not the vocal cords vibrate, and if you utilized your mouth or nose. Be most aware of how your throat, mouth, and nose are being utilized as you learn to develop your Japanese pronunciation skills! It’s important to practice pronouncing them. 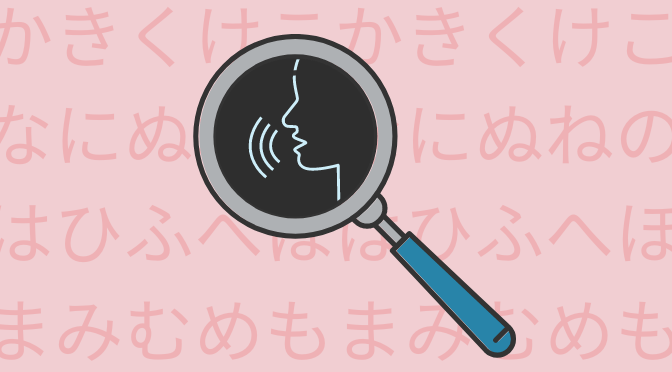 As a disclaimer here, linguistics is a pretty complex subject, as is what exactly goes into building sounds from a physical standpoint to create words and structures. So we’ve put this all in everyday-people terms to save your brain the trouble of looking up all those big words.

A final note: This is not all there is to say about Japanese consonants. In truth, when you learn Japanese, you’ll notice it has accounted for the unusual sounds found in other languages, take “fork” and “vodka” as an example, these have been adopted. Since this article focuses only on native Japanese consonants, the extras were not covered here.