Japanese greetings – Ways of acknowledging someone

Today we cover Japanese greetings, one of the most important topics for any new language learner! Not all greetings are equal in Japan. If you’re new to Japanese, take some time to master all the essential greetings which we list at the top of this article. 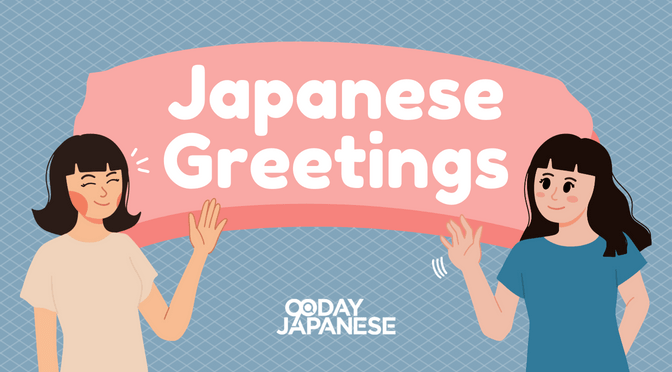 Further down (for the advanced students) are the higher-level greetings. You may find some things you’ve never seen before!

We include sentence examples to each phrase that calls for some clarification based on context. Those without sentence examples are straightforward and used as they are. After this study session, you’ll be more prepared than ever before to greet native Japanese speakers! Let’s get the ball rolling!

あいさつ (aisatsu|挨拶) translates as “greeting,” but it’s more than just that. It’s essentially the art of greeting.

Much like any other culture, Japanese kids are taught how to greet others properly from a young age. Proper greetings follow Japanese natives all the way into adulthood, being an irremovable part of work culture and societal mandates.

Don’t take Japanese greetings for granted – they are heavily significant and speak volumes to Japanese natives (even though they are forgiving with foreigners)!

The first one is おはよう(Ohayou) which means “good morning” in Japanese. Just like in English, that applies anytime before high noon.

Though this well-known Japanese greeting means “good morning,” it is also commonly used to say “hello” to someone on your first time seeing them, even if it’s past noon. That applies especially to those who meet in routine and are well acquainted, like co-workers or friends in a club.

In order to make this a polite expression, you can say おはようございます(ohayou gozaimasu).

We probably don’t even have to teach this one to you! こんにちは (Konnichiha), by default, is the standard “hello” in Japanese, although it is used to mean “good afternoon” or “good day” whenever it’s used. It works just like “good afternoon” in English, and there is no polite form.

Note: You’ll notice that こんにちは(konnichiha) finishes with the character は (ha). This is the particle form of は (ha) which is actually pronounced “wa.” That’s because “konnichiwa” is actually a short form of an older Japanese greeting that goes like this:

How are you doing on this day?

The first part, “kon nichi ha”, is a reference to “this day” when directly translated. Over time as the short form became commonplace, “kon nichi ha” became one Japanese word – but the original syntax remains!

こんばんは(Konbanha) is the Japanese expression for “good evening.” Unlike in English, this is only used when you greet someone and never upon departure.

While this expression is common and taught in basic-level Japanese, close friends and each Japanese family member don’t say this to one another! It feels a bit too sterile and formal! This is something you’ll use with strangers or in business relationships.

Note: Just like our last expression, the は(ha) in こんばんは is pronounced like a “wa.” The history of the expression is exactly the same, too – ばん (ban|晩) means night in Japanese!

“Nice to meet you” in Japanese

はじめまして(Hajimemashite｜初めまして) is a Japanese expression that means “it’s nice to meet you.” It’s something you’ll use, well, when meeting someone for the first time.

“Let’s get along” in Japanese

Usually, it’s the direct response after another friend introduces you. Oh, and this expression usually comes before stating your name and another Japanese phrase, よろしくおねがいします。(yoroshiku onegaishimasu｜よろしくお願いします), which roughly means “let’s get along.”

This is my best friend.

Nice to meet you, I’m Satori. Let’s get along.

Sometimes, if two younger people are meeting or if someone wants to sound cool, よろしく(yoroshiku) alone will be used to say, “Hi, nice to meet you. Let’s get along”.

Our next line of Japanese greetings is to only be used in casual situations with familiars. Here’s where the more advanced students might find a hidden gem or two – let’s take a look:

“How have things been lately?” in Japanese

さいきんどう？(Saikin dou?|最近どう？) is an expression with the literal meaning of “how was recently?” and more naturally translates to “how have things been lately?” or “what’s going on?”

To make this expression even shorter, you can just say どうよ？ (douyo?). It’s a great way to get right into your friends’ business the moment you see them!

Yo Natsuki, how have things been lately?

To make this more of a polite and formal greeting, you can add the ending ですか (desu ka) – さいきんどうですか

おっす(Ossu)  is a casual greeting between close male friends and implies informal interactions. It simply means “hey” or “what’s up?” in its greeting form.

Above, you have learned how to say “hello” in Japanese. But to express a similar greeting, more of an exclamatory way to say “hi” in the Japanese language, you can use ヤッホー (yahoo) or やあ (ya). It’s a light and fluffy Japanese expression used by kids and friends too.

Although this on is one is kind of short and easy, it takes some practice to get the feel of it – Don’t give up on your learning Japanese!

Hey big bro. Is mom already on her way to work?

This is a basic Japanese expression meaning “The weather sure is good today, huh?”. Just like in other foreign words, it’s a great way to open up a conversation or make small talk. We bet that this will come naturally to you if you haven’t already used it as an opener in Japanese before!

We sure do have nice weather today. So what will we do today?

Next up, we give you some other Japanese greetings used in a number of different situations in everyday life, like when coming home on in a professional atmosphere. You won’t want to miss these:

“I’m back” in Japanese

There are special Japanese greetings and salutations used when leaving the home. When you are returning home, you can say ただいま (tadaima). It translates simply as “I’m here again” or “I’m back.”

As a special Japanese greeting used to respond to the one above, you can say おかえりなさい (okaerinasai | お帰りなさい ). So if you are home and your host mother walks in, you use this phrase. It literally translates as a command to return somewhere, and more specifically, home.

Actually, the verb found within this word, おかえる(okaeru｜お帰る), is a basic Japanese verb that literally means “to go return (home)”!

These are two typical phrases always used without fail. おかえりなさい (okaerinasai | お帰りなさい ) can also be shortened to just おかえり(okaeri | お帰り) for the more casual version.

“Long time no see” in Japanese

The Japanese phrase ひさしぶり(hisashiburi|久しぶり) is used to say “long time no see!” To make this phrase more polite, you can say お久しぶりですね (o hisashiburidesune)！

Long time no see! How are you?

Answering the phone in Japanese

There are other Japanese phone greetings that are used more in business situations under special circumstances, but most people will never need to learn those.

There are two different ways of saying “welcome” in the Japanese language. These greetings are used in different kinds of situations. We’ll discuss them further below.

There are distinct differences between social interactions in Japan depending on your familiarity, age, and status. One of these examples can be found in business transactions with clientele…and the Japanese culture takes its clientele very seriously.

For that reason, when customers walk into a business of any sort, they are given a special welcome using the expression いらっしゃいませ！ (irasshaimase!) It is very honorific and welcoming. This expression isn’t used on any other occasion.

Another one of the most popular native Japanese phrases is ようこそ(youkoso), which also means “welcome.” Unlike the expression above, ようこそ (youkoso) is mainly used when entering the country of Japan specifically. This expression, just like the one directly above, requires no response!

How do you greet everyone in Japanese?

There is no special Japanese phrase for greeting everyone at one time. Instead, a native speaker typically uses the word みんなさん(minnasan|皆さん), which means “everyone,” together with their greeting phrase. Alternatively, the names of each individual will be included as you greet them, much like in English.

How is everyone? / Is everyone okay?

Body language when greeting in Japanese

Of course, words play the biggest role when learning how to greet people in Japanese, but it’s not the only important thing to consider. Body language is also a huge contributor to how your greeting and overall presence will be received! 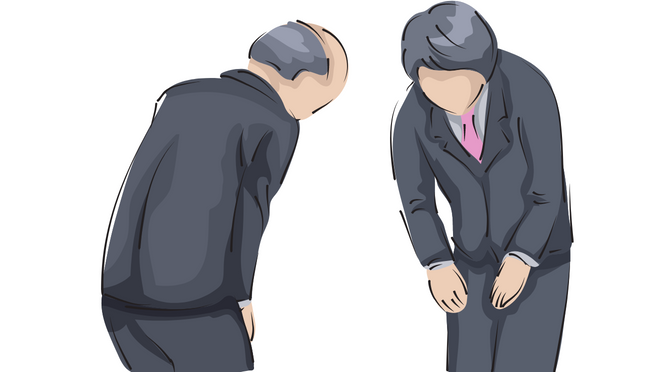 If you haven’t noticed already, bowing is used as the primary greeting gesture in Japan. If you’re a businessman or businesswoman, these introductory bows are pretty much always accompanied by the handing over of a business card.

Even normal working people and older students keep business cards for when they meet new people – it’s a huge part of Japanese culture!

Going hand-in-hand with the effect of status on how to greet in Japan, elders are always greeted first!

If you enter a room with many people, it’s okay to greet everyone, just as we pointed out earlier. If the seniors happen to be on the opposite side of the banquet from which you enter, don’t ignore everyone else as you push past to make your greetings!

But if you’re given a choice at the moment whether to greet the younger or elder first, you should go to the elder. As a general rule, always be very mindful and considerate of the age factor in your exchanges!

And that’s it for the greetings used in the Japanese language! If you’d like to learn Japanese further, how about going over our article on Japanese words next?

2 replies to "Japanese greetings – Ways of acknowledging someone"