Have you ever thought about getting better acquainted with the Japanese name?

Names are important in Japan and may have more significance in Japanese culture than you’d expect. Not only do names themselves bare special meanings, but the formatting of names plays a key role in formality. The Japanese Ministry of Justice even regulates personal names (more on that later)! 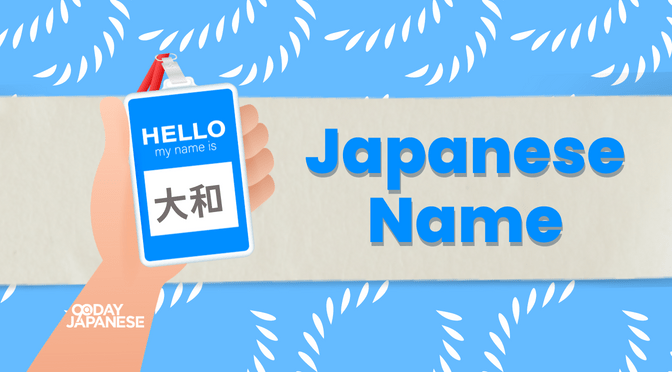 This article is all about the different names in Japanese and everything you might want to know about it. Parents might get great ideas for baby names here too!

The Japanese Word for “Name”

Let’s start ourselves off with a quick vocabulary lesson. In case you were wondering how to say “name” in Japanese, it’s なまえ (namae|名前). This specifically means place name or personal name.

If you ever want to refer to the name of a thing, you use the term 名前 (namae). Referring to someone’s first name? Again, we use 名前 (namae).

Sometimes, this term is cut in half and shortened to simply な (na|名).

The other term for “name” in Japanese is みょうじ(myouji｜苗字), which represents a person’s surname or last name. The first term, 名前 (namae), is one of the most important Japanese vocabulary words to learn as a Japanese student, so master it well!

Just like in most countries, the popularity contest winners for names shift a little bit each and every year. It’s very rare to find a young adult “Otis” or little girl “Pearl” these days, as those names just aren’t common anymore!

The common Japanese baby names of the last 30-40 years have become the well-known names of Japanese adults today. Thusly, here are some current popular Japanese first names for boys that you may want to learn! You might have known some of these from any anime or manga series that you follow.

やまと(yamato|大和) – This name represents one who has great harmony

のぶ (nobu|延) – A name that means expansion, extension, or prolonging. This name is a blessing for longevity.

And, of course, here are some very well-known Japanese baby girl names worth getting familiar with.

ちよ(chiyo|千代) – A long-thriving name, this one means “a thousand generations” and foreshadows longevity

じゅんこ (junko|順子) – Just like the boys’ name above, this female version also represents the obedient or orderly child

はな (hana|花) – This name means “flower” and is totally a vocabulary all Japanese learners should know!

Keep in mind that there are a few names that are unisex in Japanese and can be used for both boys and girls!

Surnames (often called last names in English) are diverse in Japan but perhaps not as diverse as in a place like America. The population of Japan is 98% ethnic Japanese, so not much compromise has taken place when it comes to last names.

Below are the most popular and widespread Japanese surnames these days. Keep in mind that these names are generally popular but may not be most popular in some specific areas of Japan, as each region is a little bit different!

*さとう(satou|佐藤) – The name means to “help the wisteria.” Wisteria is a traditionally respected flower in Japan and was often found in imperial gardens.

すずき(suzuki|鈴木) – Yes, this is the same Suzuki as the car. This name means “bell tree”

たなか(tanaka|田中) – This common name means “within the rice fields,” or paddies

わたなべ(watanabe|渡辺) – This vetted name means “to cross an edge”

やまだ(yamada|山田) – A name that represents mountains and rice fields.

*Please note that these names are written differently in Japanese/hiragana than in English. Although they are romanized with a long vowel (for example, さとう = satou), when translated to English, they are usually written without the long vowel (just Sato)!

Other things to know about Japanese names

Now that you know some of the common names in Japanese, here are some interesting and helpful facts about them.

You may have noticed that many of the names in the individual lists above contain either the same sound, character, or meaning. This is a normal phenomenon in Japanese culture.

For example, many boys will have the sound お(o) in their names, a pronunciation of the characters for “man” (男/雄/夫). There are other popular Japanese sounds, too, like ろう(rou) and た(ta). ろう(rou) represents either “son” （郎）or “clear/bright”(朗). た(ta|太) carries the meaning of “great” or “thick.”

The same goes for girls too. Take, for example, the popular name ending こ(ko), which usually corresponds to the kanji for “child” (子). Or how about the very popular sounds and character of み (mi|美), which means “beauty.” The Japanese language can dance in this way only due to its unique structure! Pretty cool, huh!?

Japanese names that can be a first or last name

Some Japanese names can actually be both a first name and a last name. A few popular examples are ますこ(masuko|益子), あらた(arata|新), and かねこ(kaneko|金子). Even though these names have a double standard, due to naming patterns, native Japanese people will really never have a problem confusing the proper place of these names.

Unlike many other lists of Japanese names out there, we’ve taken the time to include the corresponding かんじ(kanji|漢字) with each name. 漢字 (kanji) are the Chinese characters that were adopted and are used as a part of the Japanese language.

There is a very important reason why these characters were included in our lists: Japanese names have no meaning without 漢字 (kanji)! Well, there are a few exceptions to this rule – some names are just phonetic combinations – but by and large, all Japanese names have them.

That’s because it is the characters themselves that have the meanings. That is, three people with a name bearing the exact same pronunciation may write their name three different ways and therefore have multiple meanings.

On the flip side, that is also why the exact same characters may be pronounced in different ways, leading to different names altogether!

This way of reading characters for creating names is known as なのり(nanori|名乗り). Typically there are only two readings for 漢字 (kanji).

名乗り(nanori) takes all the potential readings and meanings for a character into consideration to create a completely unique name! So when dealing with Japanese names, it is super important to understand and honor the 漢字 (kanji) that’s involved!

The Structure of Names in Japanese

Dissimilar to many other countries, almost all Japanese natives have only one first name and one last name, as we defined earlier on in this article. Only those natives of mixed ethnic backgrounds sometimes have middle names – otherwise, you’ll never find them!

In the olden days, some family patriarchs were granted another surname by the emperor aside from their normal みょうじ(myouji|苗字). There were two different surname titles that could be granted – either せい (sei|姓) or うじ (uji|氏).

Each had a slightly different purpose related to the special lineage of those who received them. These names were very rarely given to people, however, and over time they died out.

Order of names in Japanese

Also, as you may already know, the surname always precedes the given name when addressing someone’s name in Japanese.

For example, if you come across a name that reads やまもとかずえ(yamamoto kazue | 山本和江), you should recognize immediately that やまもと is the given name and かずえ is the first name. Plus, since Japanese writing can be done vertically as well as horizontally, the first name is also known as the lower name.

Note: Unless you are very familiar with someone (or unless they introduce themselves as such), you’d never address them by their first name!

Regulations of Japanese names by the Ministry

Oddly enough, Japan’s Ministry of Justice actually governs the use of Kanji character for names. This has placed a limit on the characters that can be used for both a Japanese surname and name.

The purpose of this is twofold: for one, this limitation regulates the logistics of Japanese literacy. For two, this prevents certain old or negative characters from being used to create offensive or incomprehensible names.

Here’s a fun fact: members of the Japanese royal family as a whole bear no surname. Remember how we said that sometimes the emperor would grant special surnames based on one’s lineage and family history? Well, historically in Japan, surnames were not necessary and only used to denote these certain people.

For example, if a member of the imperial family breaks away from the family, that family would be granted a special name to honor their lineage. But many common folks didn’t even adopt surnames until a certain period in Japan known as the Muromachi period.

Since the imperial line has been unbroken, there is no need for them to acquire a surname! Instead, the emperor grants members of the royal family a title followed by no-miya, such as Misaka-no-miya or Hitachi-no-miya. These special titles are considered appellations and not surnames.

Using the Title Instead of the Japanese Name

Usually, as a sign of respect for seniors, Japanese speakers will avoid saying a name altogether and simply call someone by their title. For example, せんせい(sensei|先生) in Japanese means teacher.

You may simply always refer to your teacher as 先生 (sensei) unless you are referring to them specifically and must say their name. The same goes for family members, too, the same way in most other cultures.

Alternatively, perhaps you don’t know the name of someone at all, but you know their position of employment. In such circumstances, you can simply address that person in their position.

For example, you might address the owner of a shop as てんちょう(tenchou|店長), which defines his position. Lastly, you might address someone by their position followed by the suffix さん(san), which can be thought of as “mister” or “miss” in a polite sense.

What is my Name in Japanese?

Now knowing all of this cool stuff about the intricacies of the Japanese name, you may be wondering if you can have your own name in Japanese– well, you can!

There is a concept you need to know for creating your own name in Japanese using kanji: あてじ (ateji|当て字).

あてじ (ateji|当て字) is using kanji to correspond to sounds, regardless of meaning. It can be considered phonetic kanji. It’s something that’s very famous in recent decades and modern-day Chinese culture as well as Japanese culture. Before katakana was invented, this is how the Japanese incorporated foreign words into their language.

すし (sushi|寿司) is a great example of 当て字 (ateji) at work, as the two kanji used to write sushi actually have nothing to do with its meaning but are very common kanji used throughout Japan.

We won’t provide any name examples here since its use is a little impractical and since using this method can be quite tricky, but it’s good to know!

And that’s it for the Japanese names! How about learning about the different seasons in Japan next? You’ll get to know when the best time to visit for cherry blossom viewing would be. Til next time!