We’re back with another chapter on 90DayJapanese with Japanese nouns! If you want to speak a new language, you must learn the vocabulary. After all, you can’t properly use verbs, particles, adjectives, adverbs, and other aspects of grammar without a single noun! 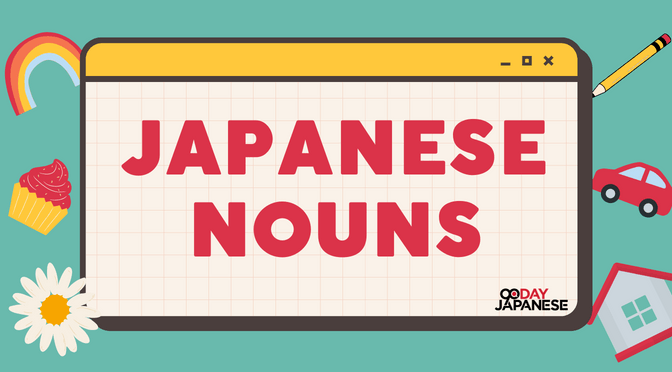 These Japanese words are one of the biggest categories of the vocabulary of any language, just like English nouns. Think of this as a non-exhaustive list to find the most useful and basic Japanese nouns for your studying.

We also provide plenty of example sentences so you can see how these words go together with other parts of Japanese grammar. Moreover, the nouns are broken down into sections – so scroll down, find a section that interests you, and get to learning!

There are a few different types of Japanese nouns, the first of which are common nouns. Common nouns name general items rather than specific ones. This section has the best Japanese common nouns to learn and master for any Japanese student!

Japanese Nouns on Time and Date

It’s essential that we know how to say the date and time in Japanese. Otherwise, how can we make plans to hang out with our new Japanese friends!?

We added those last two words not only because they’re useful but also because their equivalent does not exist in the English language. Due to the use of Chinese characters in the Japanese language, simplifications like these can be found everywhere, so keep your ears up!

I will take a nap two hours before the presentation.

Learning about transportation is important in any language. While there’s a lot to delve into when it comes to this topic, here are some basic important Japanese nouns for different modes of transportation.

The bus to New York

Japanese Nouns on Placement and Direction

Learning the basic Japanese words for placement and directions early on is a great way to boost your communication and comprehension skills. Doing so can literally help to orient you in the language!

The incident/accident happened right in front of me

It’s easier for her to use her left hand

Next up on the list are the parts of the body (so you can tell the doctor what actually hurts)!

*Note: the hair located on your head specifically is referred to as かみのけ (kami no ke | 髪の毛)

I had an injury, so now my arm hurts

Exercises that move your body are good for your heart

Here are some of the most common Japanese nouns for occupations.

Is the exam to become a nurse difficult?

The police in America have a bad reputation, so many people don’t like them

Every Japanese student needs to know their basic Japanese locations. These locations are very often visited or spoken of in Japan (in general, really) and are definitely worth remembering!

*Note: There are several names for the bathroom, among which are けしょうしつ(kesshoushitsu \ 化粧室) and トイレ (toire). The first literally means “the makeup room” while the second is just the Japanified version of the word “toilet.” Oh, and the word (otearai) comprises the kanji for hand and wash, so… you get the point!

His family enjoys their summer vacations every year in the countryside.

That boy is waiting for his friend at the bus stop.

There are a few specifics when it comes to the Japanese family, including special words, stylization, formality, and whether or not your family is the topic of discussion. These specifics are not elaborated here, but you can learn all about the Japanese family terms some other time!

How is your mother?

My mom is good, thanks.

Colors are very often used as adjectives (both in English and Japanese), but they can also take the form of a noun. In fact, colors are known as “abstract nouns” since they cannot be physically picked up or touched, like most nouns. Thusly, here are the basic Japanese colors!

The black of this sweater has already faded.

The colors of the rainbow

In the old days, before modern joys and technology, the peoples of the Earth were more observant of nature and its cycles. Well, in places like Japan, such observations are still alive and thriving – spend a year in Japan, and you’ll see what we mean! Here are the four seasons of Japan!

During the fall, all the leaves fall down

Summer is definitely the most fun season!

An Important Note: Not all nouns in Japanese have just one reading. In fact, many nouns have multiple readings and pronunciations.

Each of the nouns listed here takes the standard Japanese reading (the reading they have when the word stands completely alone). Therefore, this article makes a great basic guide to Japanese nouns but is by far not the end of the story – keep building up your language!

With our Japanese common nouns out of the way, let’s move on to some important proper nouns. These are the second classification of nouns that name items specifically. You’ll almost always find this represented as a place or personal name. Here are listed some examples of both.

Place names are, as the name implies, the name of a place. This differs from a general place like the bathroom or classroom and instead refers to a specific place.

These nouns can be tricky since oftentimes they involve unusual characters or rarely used pronunciations for familiar characters. Therefore, try to become familiar with the look and sounds of any place names you come across in your daily life. Take a look:

The population of China is greater than that of Korea

One day, I want to climb Mt. Fuji

Similar to place names, personal names provide specificity to a person or personal identity, which is important in addressing Japanese people. And remember, practicing names also counts as practicing Japanese!

I think her name is a little weird…

In this day and age, everyone knows Michael Jackson.

Remember that in Japanese culture, the last name always comes before the first name! Also, before you develop a personal or close relationship with someone, it’s more respectful to call them by their last name, even if you omit the first name.

This varies depending on age, area, and personal preference, but remember – when in doubt, be a scout… always be respectful if you are unsure!

Foreign names and nicknames in Japanese

Remember that カタカナ(katakana) is the Japanese alphabet specifically used for foreign words and names. Oddly enough, it’s also frequently used with some Japanese words, including slang words or for Japanese nicknames… or just to make any word look cool sometimes!

That being said, the use of カタカナ is limitless, as it needs to be adaptable for new and unusual sounds – there isn’t always a hard rule.

You could even shorten it to something like アンジ(anji) or アンジー(anjii) – the choice is yours!

The reason we’re saying this is to emphasize and encourage the importance of mastering カタカナ (katakana) so that you become comfortable with each and every potential sound it has to offer!

Last but not least is the prefix (o), sometimes used before specific nouns. This お (o) adds a greater level of politeness to the speaker. Here are some popular examples:

How is everyone doing?

Would you prefer to eat sushi or soba?

On a final note, keep in mind that pronouns are not a part of this list, as this article only covers Japanese common and proper nouns. Check out our write-up on Japanese pronouns for all the details on that!

Learning each Japanese noun in this post can certainly improve your Japanese vocabulary. As you learn Japanese further, you’ll come across more of these Japanese words to help you form phrases and sentences.

So, what Japanese words are there to learn next? Would you like to know how to greet someone good morning, good afternoon, or good evening? If so, our article on Japanese greetings can teach you all of them. Read more about it here!