Japanese Numbers for Beginners – A Step by Step Counting Guide

We’ll cover almost everything there is to know about Japanese numbers and learn how to count them in this article. Even if you’re only visiting a country for a few days, numbers are something you’ll need to know. 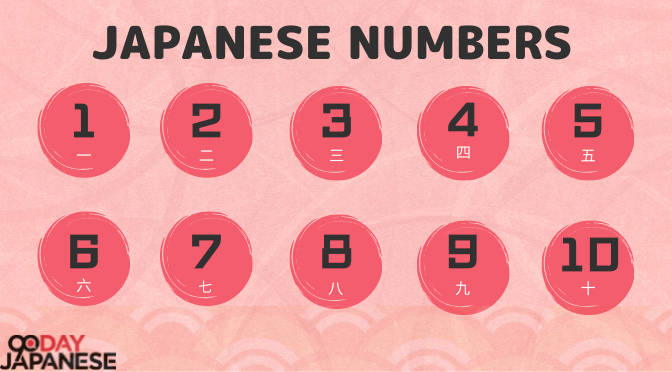 Ready? Let’s learn how to count in Japanese!

All throughout this article, we’ll be teaching you everything you need to know about Japanese numbers. They have both similarities and differences from English numbers. We’ll begin learning the Japanese numbers from 1 – 10 and learn to count or say numbers up to a billion.

Japanese numbers are an essential part of learning the language. There are many daily life activities where numbers are involved.

Want to ask for the price of that weird fruit in the local market? Numbers. Passionately browsing the train schedule for the final train home? Numbers. Looking for the address of the most renowned restaurant in all of the town? Yup, numbers. Usually, just numbers 1-10 can get you by for a short stay— anything more will require a bigger stride.

How to say “numbers” in Japanese?

Before we begin how to count in Japanese, let’s first know the Japanese word “numbers”. There are several words for “numbers”, but the most common is ばんごう (bangou | 番号). It can be pronounced as bangou, which can also mean a series of digits.

Some other terms of numbers in the Japanese language are かず (kazu | 数), this is used when you express a number as a quantity, and すうじ (suuji | 数字) for numerical figures.

Japanese counting will only require you to learn around 30 or more numbers. The only thing you need to get familiar with other than the Japanese counting numbers is when and how to use them.

The Japanese numbers 1-10 are as follows according to the two-number system:

The Japanese number system is more complex than meets the eye. Those who have had enough experience with Japanese numbers can attest to all the many forms and rules surrounding them.

As we explore the many ways to use Japanese numbers, we’ll distinguish between which system is being used and to what extent. Let’s start by highlighting numbers 0-10 for each system:

When you learn languages, the first 10 numbers are the most important because they create the foundation for the larger numbers – the faster you learn these 10, the faster you can learn all the rest.

Luckily, for Native Japanese reading, you’ll only need to learn how to count the first 10 numbers. There does exist a complete native counting system, but its use has long since been abandoned.

For the most part, people who speak Japanese in the modern-day use this number system. Also known as on’yomi readings, this system is the adoption of traditional Chinese numerals, which are used for cardinal numbers.

There lies uncertainty as to when Japan almost completely abandoned the Japanese counting system, but recorded use of it dates back to 1936. This is in large part due to Chinese influence on Japanese culture.

Here are the Sino-Japanese numbers from 0-100:

As you’ll see, some of the numbers have two pronunciations – respectively, 4, 7, 9 This is due to similarities in pronunciation with these numbers and other words that Japanese people considered “unlucky numbers”.

Because of these “unfortunate” similarities, Japanese people avoid using these numbers, and the Native Japanese pronunciation has been adopted for common use. The superstition even goes so far as to omit the 4th floor in the design of buildings, or the 4th seat in a theater!

Sino-Japanese Numbers up to 100

Once you’ve mastered basic Japanese counting from 1 to 10, repeatedly compounding and adding will do the trick to help you improve quickly!

All the numbers up to 100 are created by combining the numbers 1-10. Let’s take a look at the patterns that form Japanese numbers.

Note: じゅうよん (juu shi) is almost never used to express the number 14. The same goes for しじゅう (shi juu) when saying the number 40. Instead, よん (yon) is substituted in place of し (shi).

Now, for Native Japanese Numbers (native words / kun’yomi readings). As mentioned, these numbers are used less often, and on a smaller scale, but are also quite important. The first essential use of these 10 numbers is to be used as counting numbers.

Counting in Japanese has specific counters that are used for specific things. The counter こ(ko | 個) is used to count small objects. まい (mai | 枚) is used to count thin, flat objects, and ひき(hiki | 匹) for small animals. There are dozens of popular Japanese counters.

Because of these counter words, counting objects can be difficult. But fortunately, the first 10 Native Japanese Numbers can be used as the universal counter. It can be used for almost anything. Pizza, pens, buildings, trash bags, spaceships, you name it! The only things they cannot be used to count are people, money, and time.

Things to know about Japanese numbers

We’ve finished discussing the two types of number systems in Japanese. But before you can master the Japanese numbers, there are a few things you should remember. Let’s discover them now!

The Importance of TenTen and Maru

Here are some examples of the phenomenon:

Note that the ends of 6 (ろく) and 8 (はち) are cut short, resulting in a new compound word. This rule of using 3 and 8 in their abbreviated form behind other words is very common. The same goes for numbers 10 and 1, although not in this case.

These are just two examples amongst plenty. It seems kind of complicated, but here is a general rule of thumb: Use this rule with any word/counter beginning with the “H” or “S” sound. After a while you get the hang of the patterns and speaking against the rules just sounds unnatural – these rules were created for more fluid communication after all.

Another thing to keep in mind as you learn Japanese is that, while れい (rei) means “zero” in Japanese, the most common way of saying it is ゼロ (zero) or まる (maru), which means circle. In English, まる (maru) is equivalent to reading the numeral 0 as “oh” when reading individual digits.

Ordinal numbers are numbers that are ordered, such as the “first” or “twenty-third” number. It’s rather easy to make ordinals in Japanese – just add だい  (dai | 第) before the number:

When you count people in this way, the character め (me | 目) is often used after the ordinal number, as in だいさんめ (third-person | 第三目).

Other, more venerating expressions are also used sometimes, but this is the most important and most common way to address people in ordinal form.

How to read phone numbers in Japanese?

When saying Japanese phone numbers or office numbers with hyphens, the hyphen is represented by the word の (no), which is fairly simple to say. Here’s an example:

Counting the Days of the Month in Japanese

A combination of both Native Numbers and Sino-Japanese numbers is used to count the days of the month. The days using the Sino-Japanese reading use the standard counting system, followed by the counter word にち (nichi | 日) to denote the day. The native Japanese number system is more irregular.

Take a look at the different days of the month in Japanese: 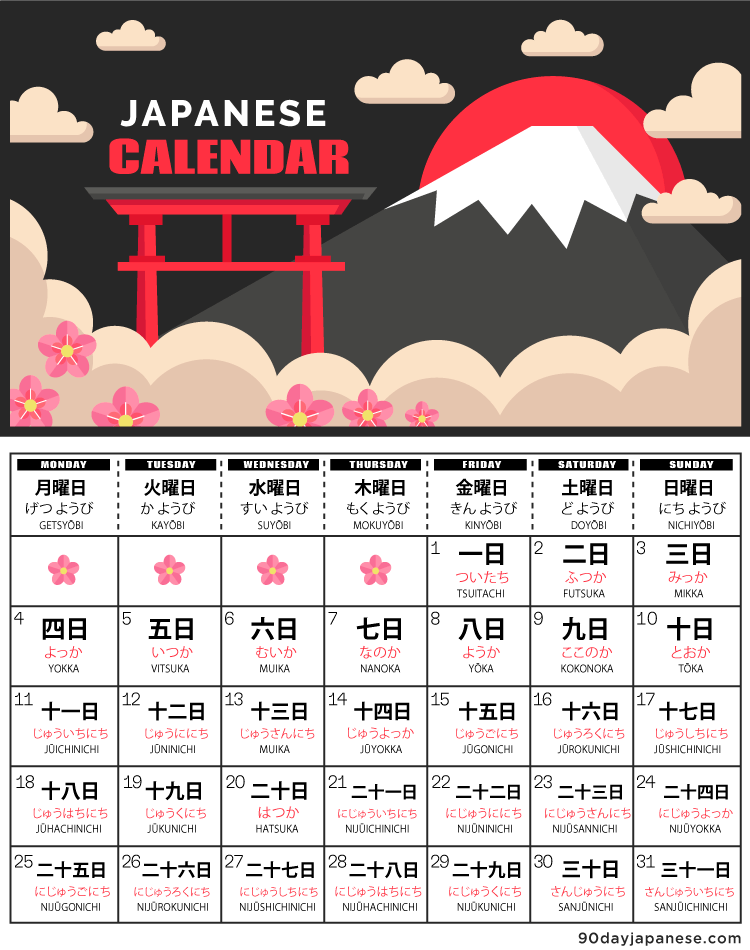 Oddly enough, when counting people in Japanese, only the terms for “1 person” and “2 people” are irregular:

Counting 3 or more people follows the same system, except the pronunciation is standard:

Counters specify the type of object that you want to count in Japanese. In this section, we’ll go over the ones you’ll hear in everyday Japanese conversation, as well as how to use them with numbers.

For example, if you’re talking about small round objects, you should use the counter こ (ko | 個).

For flat and thin objects, you should use the counter まい (mai).

For long and thin objects, you should use the counter word ほん (hon | 本).

For example, you should use びょう (byou | 秒) to express seconds.

These are just a few Japanese counter words. There are a lot more! Including those for long objects, furniture, machinery, train tracks, clothing, etc. It’s impossible to remember them all. However, you can check our list for the most common Japanese counters here.

Another Note on Japanese Numbers and Their Usage

We covered the majority of rules concerning Japanese numbers in their native or natively adapted forms. Yes, these symbols have widespread common use, but there’s more to the picture too. Like most places in the world, the Japanese have also integrated the use of Arab numerals into their culture.

You’re likely to see common numerical values used in tandem with their Japanese equivalent throughout Japan, especially in larger cities. Even in school, most math solutions consist of Arab numerals. However, the Japanese kanji numerals are still used in traditional ceremonies. That being said, no one will be confused in the presence of such symbols, so rely on their popularity if need be.

Overall, counting in Japanese is quite simple. As long as you memorize the 1-10 numbers and apply the mentioned patterns, you’re good to go. Try challenging yourself by adding +10 numbers every day until you reach 1000!