Japanese onomatopoeia doesn’t really get the shine it deserves at the textbook level. When learning Japanese, so much time is spent focusing on grammar and vocabulary that there’s just no thought of these sound words. 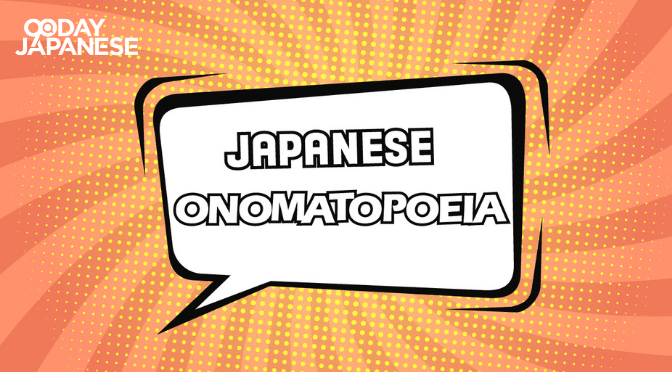 But that’s cool because this article is completely dedicated to Japanese onomatopoeia and how you can use them to make your Japanese language skills one hundred times stronger!

What’s the meaning of onomatopoeia?

An onomatopoeia is a process of naming a thing or action using a vocal imitation. Usually, the imitation sound used will be associated with the thing in some way, the same way “woof” is an English onomatopoeia of a dog barking, or “meow meow” for a cat’s sound. That’s the actual representation of the sound we hear.

You’ll mostly come across Japanese onomatopoeia as what is used to describe sound effects as if you’re reading manga. However, in a broader sense, an onomatopoeia can be any word that is used to represent a sense of some kind. Some words, like in Japanese, do not describe actual animal sounds, nature, emotional feelings, or movements.

You’ll better understand this once you’ve learned the five classifications of Japanese onomatopoeia, which we’ll go over below!

How do you say “Onomatopoeia” in Japanese?

The word onomatopoeia in Japan is ぎせいご (onomatope | 擬声語). This actually means the same thing as the English word “onomatopoeia.”

It’s hard to spell, right? That is because it originates from Greek. “Onomatopoeia” is formed by combining two Greek words that mean “sound” and “I.” It essentially means “the sounds I make.” It doesn’t get any more straightforward than that!

That’s a somewhat refreshing fact, as Japanese has a reputation for being quite a vague and under-descriptive language. The overt use of this sound symbolism and words perfectly adds color and visuals to an otherwise gray language. These words have made their mark on the Japanese language, and we’ll discover in exactly which ways as we continue along.

Unlike English, Japanese onomatopoeia words can be broken down and classified into different categories. Each category describes sounds of a specific quality or mimetic sound. 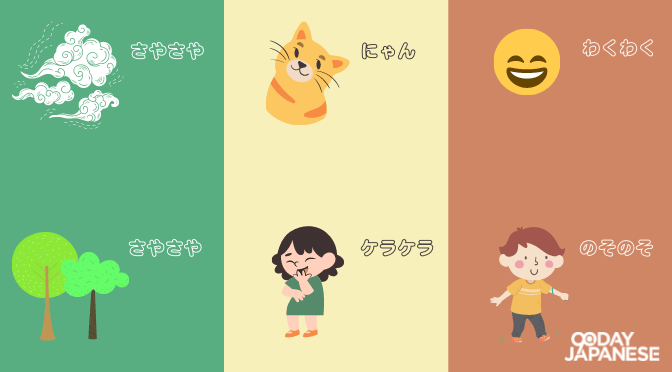 Below are the five different kinds of Japanese onomatopoeia words.

Technically, giongo is the umbrella term for all true Japanese onomatopoeia words. The character “擬” (gi | ぎ) in “擬音語” means to mimic or imitate. The last two characters mean “sound” and “language,” respectively.

Giongo, when specified, mimic sounds made by non-living or inanimate objects, including sounds in nature.

These onomatopoeia words represent sounds made by living things like dogs barking or waitresses laughing. It refers to both Japanese animal sounds and human sounds.

Gitaigo words reflect a condition or state. These words don’t mimic actual sounds but rather emotional feelings. They are also referred to as ideophones or mimetic words. You’ll mostly see this in manga.

Its sound patterns were constructed to be similar to giongo patterns. Actually, the 態 (tai ｜たい) in 擬態語 means appearance or condition.

For example, a word may have the same pronunciation but can be used in 2 different ways depending on the application. It’s pretty cool.

These three categories of onomatopoeia are most important and those which are most commonly taught to Japanese language learners (including Japanese natives).

For further subdivision, there are two types of Japanese onomatopoeia under gitaigo:

When you learn Japanese, onomatopoeia is used as/in place of verbs quite frequently. You may hear someone say, おれはぐっすりねむりました (ore ha gussuri nemurimashita | 俺はぐっすり眠りました). The ぐっすり(gussuri) here is an onomatopoeia that refers to falling into a deep sleep.

Gitaigo, gijougo, and giyougo are all known as ideophones. These kinds of words are used to represent something that has no actual sound of its own. It’s definitely a different application of onomatopoeia than probably most languages, so take your time getting used to the unique patterns.

If you know your kanji, remembering which term reflects which kind of onomatopoeia isn’t so difficult. Each type of onomatopoeia is written using the same first and third kanji characters – only the middle character is different.

Here are the meanings of each middle character to make memorizing the significance a bit easier:

How to recognize Japanese Onomatopoeia

All Japanese onomatopoeia words come in one of four forms. Here are the four main grammatical forms that you should know:

The first form is the double form, where the onomatopoeia is a repetition of one or more characters. いらいら (iraira) is one example of this double form.

Onomatopoeia in this form is usually used as adjectives, but sometimes they are used as adverbs too. It’s the most common form you’ll see for onomatopoeia words in Japanese.

Next is the ~り form, where the word ends in the character り(ri). This is an adverbial form of onomatopoeia. This form usually conveys a feeling of smoothness or softness.

The third is the ~っと form, where the word ends in the character っと(tto). Also, mostly an adverbial form of onomatopoeia. These words refer to things that stop suddenly and abruptly. It’s quite the opposite of the previous ～り form.

An Important Note: Although the rules of Japanese state that all words must end in a syllabic vowel (aside from ん), sometimes onomatopoeia end in っ (tsu) alone. This is to create an effect known as a glottal stop – it’s a sudden stop. Basically, the と (to) gets omitted to create a more dramatic effect. You see this all the time, especially in manga or films.

Lastly is the ~ん form, where the word ends in the character ん (n). This form is always used as an adverb right before a verb. It concludes with a nasal gulp when describing a sound, which creates an additional reverberating presence. It becomes a descriptor of continuous action when used as an adverb.

Technically, onomatopoeia words can change their form ending depending on the situation, but that rarely happens. When studying onomatopoeia, just focus on remembering the most popular form and leave it at that.

There are also plenty of non-onomatopoeia words that end in these patterns too. Get acquainted with the grammatical structure of Japanese onomatopoeia words, and always double-check in the dictionary if you are unsure! 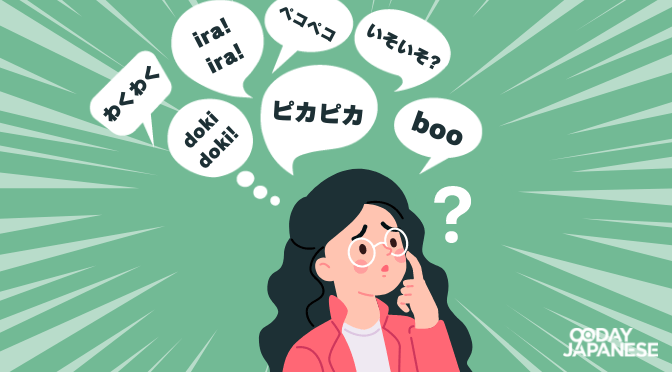 There are no hard rules as to when to use (hiragana) or (katakana) for onomatopoeia. That being said, hiragana is usually used more for soft sounds, while katakana is used for harder, emphatic sounds. Perhaps the cause for this relates to the general look and feel of the two scripts – hiragana being more smooth and rounded; katakana more rigid and pertinent.

It’s not so important in the end, so don’t be surprised to see either or. Some onomatopoeia also has kanji, an example is 燦燦 (brilliant, shining sunlight), but you’ll almost never see them used.

That’s right. The sounds of Japanese characters themselves influence the meaning of different onomatopoeia. Aside from that, sometimes onomatopoeia words are grouped or paired together to create some coherency between them and the sound they share. Let’s start by considering the idea of sound as human beings perceive it.

There have been countless experiments conducted concerning our perception of sound and its relation to texture, shape, size, color, etc. The Kiki Bouba test is one of the most well-known of these tests nowadays. Whether the science holds true on every occasion or not, the Japanese seem to have recognized this association to some degree.

Here is some popular Japanese onomatopoeia. Can you guess which definition is correct?

Odds are, you got most of those correct. It’s a small example of how sound can be more than just sound and how we can intuitively pick up on that. Cool.

Furthermore, subtle variations are made in Japanese onomatopoeia words to create subtly different qualities of sounds. The Japanese language consists of voiced and unvoiced consonants without going into it too deeply.

Take a look at our article on Japanese consonants for all the details. Anyway, utilizing voiced and unvoiced consonants together is a nifty way to create easy-to-understand pairs of onomatopoeia and will help you speak fluently.

Finally, consonants themselves affect the meaning of an onomatopoeia, just like whether or not they’re voiced or unvoiced:

For this example, both words represent a sense of rumbling surfacing of a tremor.

ぐらぐら(guragura) refers to the more violent shaking of an object, like a building during an earthquake. げらげら(geragera) is the rumbling laughter of a human being.

The two consonants here are almost the same but different enough to distinguish the meaning of onomatopoeia.

How to use onomatopoeia in Japanese

Of course, like any other part of the Japanese language, onomatopoeia must be used in tandem with proper grammar. Below, we show the rule for the grammar point and what the onomatopoeia is treated as in the sentence.

Some words are more flexible in grammar, while others are quite strict (there are thousands of these things). Practice and exposure will be your best teacher in the long run, so don’t stick to any hard rules until you’ve mastered a pattern.

When you want to directly quote a sound in Japanese, you can add と(to) after the onomatopoeia. This is a grammatical rule that can be used in a myriad of scenarios, including this one.

She saw the fireworks and screamed “wow!” without thinking!

For adjectives, simply add (no) after the word before directly adding the noun.

We stared at the fluffy cloud in the sky.

Remember, adverbs can be used with any verb so long as it makes sense. Some use the particle に(ni) while others may use と(to).

The ride keeps spinning around and around.

Dad really works hard every day at work, so his clothes are becoming worn out.

The thunder began to ring.

The verb です(desu) means “to be” in Japanese. The short form of this verb is だ (da). When used with onomatopoeia, they function as a copula or connecting words between the subject and compliment. The verb always comes at the end of the sentence and right after the onomatopoeia.

I bought a lot of scarves from the second-hand shop.

You may have already heard these Japanese phrases in everyday conversations or from Japanese people. Here’s a list of some of the most popular Japanese onomatopoeia expressions that are worth getting familiar with:

As mentioned before, onomatopoeia is like Japanese sound effects in a manga. It is the words you see in the illustrations’ backgrounds. Let’s go ahead and check out the most used ones!

Japanese people use a lot of onomatopoeia. It may sound new and challenging, but learning Japanese onomatopoeia is fun to express yourself. It will also help you sound less robotic.

Practice it with a partner or a local, and take your vocabulary to a whole new level as you learn Japanese! How many Japanese onomatopoeia words do you know? Share your thoughts in the section below.

2 replies to "Japanese Onomatopoeia – A Guide to Interesting Word Sounds"