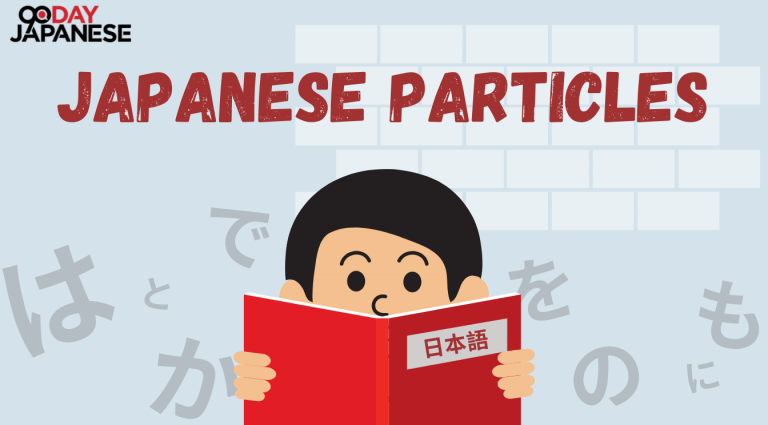 When I was a university student, the head lady of my Japanese department (Kawashima Sensei) wrote an entire book dedicated to Japanese particles alone. It was a best seller. Getting a full grasp of the proper usages of Japanese particles can be challenging, even for those more experienced Japanese students.

Thus, we’ve put together a usage guide for the most popular and useful Japanese particles for Japanese speakers in hopes to bring some clarity to the subject.

Japanese particles are important in language learning. They are words that serve as markers and connectors in sentences. They serve as markers to help us identify the role of a word whether it’s the subject or object of the sentence.

Japanese particles also serve as connectors in sentences to help words have a smooth transition and add clarity to the thought of the sentence.

Japanese particles are called じょし (joshi). They are also known as てにをは (tenioha).

Firstly, here is a Japanese particles list that contains the main particles that we’ll be reviewing in this article:

Keep in mind that it’s nigh impossible to cover all the particles in one article alone, so this list is not exhaustive. That being said, these are the heaviest hitters and will require mastering. Now, time to learn Japanese particles.

In this section, you’ll have the Japanese particle chart that has the list of particles along with their functions.

The は (wa) particle is used as a topic marker. It indicates the topic of a sentence.

は (wa) is one of the most common Japanese particles. This “topic” is often the grammatical subject, but can also include objects:

The が (ga) particle functions as a subject marker. It’s used to mark the subject of the sentence and is often used as an emphatic particle

The particles が (ga) and は (wa) invite much confusion for native English speakers – and it’s understandable why. The main difference between the two particles is that が (ga) is a grammatical case while は (wa) is the non-grammatical focus of a sentence.

Below are some examples incorporating both of these particles.

In this sentence structure, the focus here is the shoes since they precede the particle が. The particle は simply marks the topic who is committed to the subject. In other words, the shoes themselves take the emphasis.

Here’s the exact same example, with the Japanese words あかいくつ(akai kutsu | 赤い靴) and かのじょ(kanojo | 彼女) flipped. In this sentence, the emphasis is now being placed on the girl instead of the shoes.

We know this example is kind of wacky, but that should make remembering the significance of the sentence structure easier! It also shows how important it is to learn Japanese grammar and Japanese particles. Here’s another example of how to use it while emphasizing something.

が (ga) and not は (wa) is also used when asking a question where the question word (who, what, or which) is or is part of the subject itself:

が can also be used before the potential form of verbs:

This means it will come right after whatever it is you’re doing, or thing that is taking the action. You’ll usually find this particle directly preceding the verb of a sentence.

When using the particle, the sentence is usually answerable by what or who. The answer is found before the particle を(o). Let’s take the sentence above as an example. Who is reading? My friend. What did my friend read? A book. Another example:

Note: the usage of the particle が (ga) here is meant to emphasize that that man is indeed looking at the train. If instead the particle は (wa) had been used, the sentence would take the same meaning except for the emphasis.

The の (no) particle functions as a marker of possession in a sentence. In English translation, it’s basically the [apostrophe + s] of the English language:

Note: だ(da) is the short form of です(desu). よ(yo) is a particle used at the end of a word or sentence to emphasize its deliverance. We’ll talk about よ(yo) later.

The particle も (mo) functions as an inclusive marker. It is used to say “too”, “also”, “either” etc.

It’s also used for negative inclusion, equating to words like “neither” and “nor” at times. Lastly, it’s used to mean “both”. When used, it replaces the particles が (ga)、は (wa) 、and を (o) – Take a look:

Note: you can also just say わたしも (watashi mo) when you want to say “me too” to avoid sounding like a robot. It would still mean the same – that you like dogs too. But be careful in using this as it can mean both formal and informal depending on the situation you’re in.

When you’re given two choices and you want to pick both: 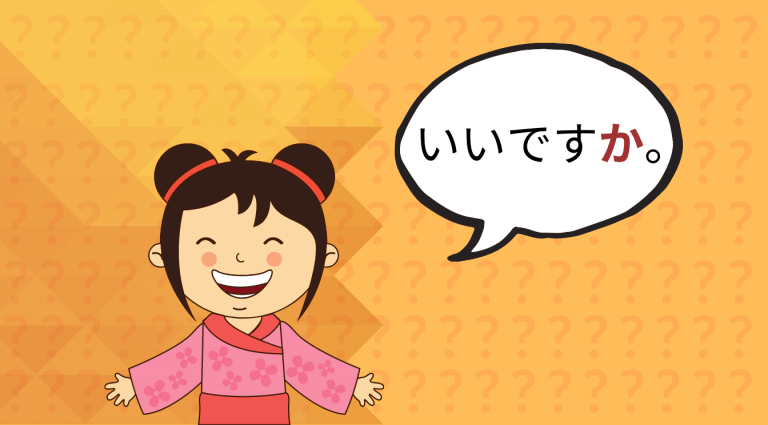 The particle か (ka) can be used in two ways. It can be used as a question marker or a choice marker.

The first usage of か (ka) is a question marker. The particle is placed at the very end of a sentence turning a statement into a question. In fact, it’s the only true way to form sentences in Japanese, although intonation alone is often used in its place.

When asking questions, you usually start with question words – what, who, where, when, then end them with か (ka). Like this:

Note: You don’t need to put a question mark at the end of the sentence if it ends with か(ka). You can just end the sentence with the Japanese period because か(ka) already indicates that it’s a question.

Most question sentences use falling intonation. Rising intonation is used with questions that are answerable by yes or no.

The second usage of か (ka) is a choice marker. It is used to list out options. These options should be specific and determinate. You can think of this か (ka) as an approximate equivalent to the English “or”:

The Japanese particle と (to) serves as a marker of accompaniment. It has two major uses. The first use is to attach two nouns or more. This usage is a close representation of the English “and”:

と (to) is used to show whom or what something is done with – that’s the keyword here:

The で (de) particle functions as a location marker. This is the particle you’ll need to say where something is located or is taking place. This marker does not qualify movement (we’ll cover that one next) but simply denotes a static location. Check it out:

Note: This particle cannot be used with the verbs いる (iru) or ある (aru) – both means “to be”. 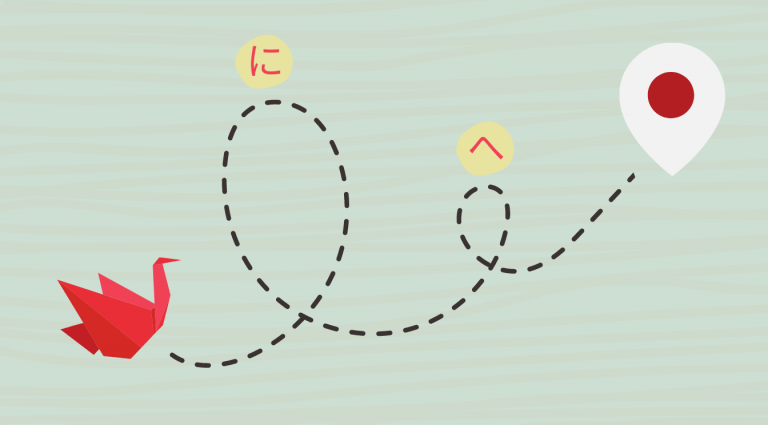 The に (ni) particle is a movement marker.  This particle is used when there is an action of movement between people or objects. There are some Japanese verbs that must take the particle に (ni) which aren’t related to movement, but those are special cases. This particle usually comes right after the location is stated:

Here’s an example of how to use に (ni) when directing an action/motion onto or toward an object:

It’s also used to mark the indirect object in a sentence. Here’s an example:

This particle is also commonly used when speaking about a specific time, such as a day, hour, year, etc. In such cases, it can be seen to translate as “on”, “at”, or “in”:

This is another movement marker similar to に (ni) particle. Both particles specify movement onto, into, or toward something else.

The major difference is that へ (e) carries the nuance of going toward another place rather than going to another place. Take a look:

に (ni) could be used in place of へ (e) in this sentence, and it would still mean “I went to Germany.” Using へ (e) sounds more like “I went to/toward Germany”, implying that perhaps you never made it to your destination. It leaves more room for narrative coloration.

Unlike に (ni), へ (e) can also precede the particle の (no) which then enables a noun to follow the “moving toward”. Here’s an example:

Note: It is possible to use only the particle の (no) in this sentence, but doing so leaves room for ambiguity. It could mean the presentation is for your friend, or that is simply your friend’s presentation. Adding the particle へ (e) specifies that the movement is for (goes toward) your friend. 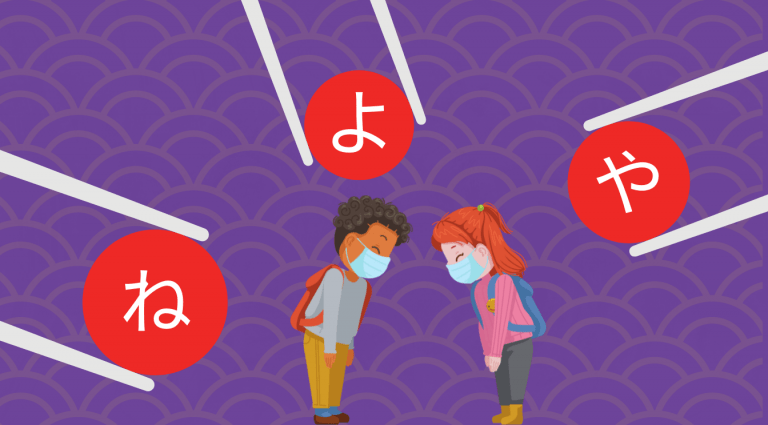 We know there are a whole lot of other particles out there but here are other commonly used particles.

When this particle is used at the end of the sentence with a rising intonation, it indicates confirmation. It’s like saying “right?” “isn’t it?” in English.

For extra emphasis: よ (yo)

It’s kind of like saying the English expression “you know”. It shows strong conviction so it’s often referred to as the “spoken exclamation mark”. You may often hear this in an anime confession (lol):

The other option marker: や (ya)

This particle is similar to the particle と (to) -both are used to connect and list multiple items. や (ya) is used when describing a non-exhaustive list, rather than a specific list like と (to). In English, this would sound like “such as A and B and C”:

や (ya) is a fairly simple and important particle for beginners to study. In reality, や (ya) is only really ever used in this way in formal writing. If you want to express this same sentiment when speaking, you’d use another particle, which is the next Japanese particle we’ll talk about.

These particles are both ways of saying “etc.” or “and the like”. など (nado) is actually often used alongside や (ya) as a finishing “etc.” to a non-exhaustive list. Other times, it’s used on its own (especially when speaking.) Here are some simple examples of など (nado):

Saying “from” with から (kara)

Next, the beloved kara. から (kara) indicates the starting point of a time or place. It can be thought of as the English “from”.

Saying “until” with まで (made)

This Japanese particle is often used in tandem with から (kara). It marks the end of a point in time. Meaning “until” or “up to” in English.