Today’s article is all about Japanese terms of endearment! Nothing feels better as a non-native speaker than speaking sweetly and naturally to your significant other or friend and foes alike! 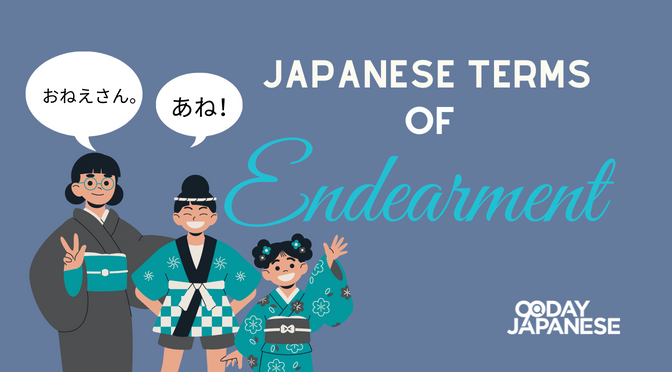 Here, we’ll go over all the most common terms of Japanese endearment and their context for being used. So without further adieu, let’s get those Japanese thinking caps on and learn!

You may be wondering, “what is a term of endearment?” To put it simply, a term of endearment or a pet name is used to refer to someone we feel close to in a warm way. This can either be a nickname, a special suffix (as we’ll see examples later), or a word in and of itself.

In English, maybe you’d address your boyfriend as “sweetie” and your crush as “darling.” Perhaps your best friend Louis goes by “Lulu” to you, and you call your mother “mommy.” You get the point.

Every relationship you have can have a different level of endearment, and usually, exclusive words are used for each relationship level. Moreover, every language has its way of softening words or making names cuter. Japanese is no exception. After all, you don’t always have to say “I love you” to say that you care!

With that question answered, let’s have a grab at some common Japanese terms of endearment.

So the most common way to create a Japanese pet name is by adding a selected ending to someone’s name. We’ll discuss those endearing name endings here and get into actual special words a little later on. Here we go!

So as you’re well aware by now, the word さん (san) is usually placed after names in Japanese. さん (san) is a standard used with friends, strangers, your boss at work, and nearly everyone. ちゃん (chan), on the other hand, is a derivative or variation of さん (san) made much cuter.

Since the nature of ちゃん (chan) is so sweetening, it’s often used when referring to babies or small, cute things. ちゃん (chan) is also used amongst close friends and often even becomes commonplace, transforming into an endearment term in its own right. Oh, and ちゃん (chan) is more commonly used with feminine than masculine figures.

Hey Satomi, how have things been!?

Usually, when you address your own older brother, you’d say あに (ani｜兄). When you are referring to your own brother, you’re likely to use 兄さん (niisan).

However, you can also use these terms when referring to any close friend or relative or even a stranger at times! When used toward a stranger, it reflects camaraderie and singularity between the speaker and listener.

Due to its diversity and popular application, it’s only right that these terms made our list. And they’re used all the time by Japanese people, so stay on the lookout!

We were reluctant to add ～さま (~sama) to this list due to its many implications, but in the end, it deserves to be placed here. This is a very commonly heard name ending, especially for those who watch TV dramas and anime shows – it’s not as common in standard Japanese except in the right context.

～さま (~sama) is used to address someone in an honorary or admirable position of authority. It signifies great respect and raises the status of the one who receives the name.

At the base level, ～さま (~sama) is used for doctors, professors, or guests (like, at a restaurant). At the top tier, ～さま (~sama) addresses masters, royalty, and nobility, or those in high command.

It can also be used toward someone you admire or look up to.

My report has been prepared, Nobunaga-sama.

With those two major players out of the way, there are also a bunch of less common endearing name endings in Japanese. Keywords here: a bunch. We cover some of the more popular secondary names here, but this list is by no means exhaustive.

In other words, don’t be surprised to come across more special name endings that carry the same meanings. Every part of Japan is unique, with its own cultural nuances!

These terms are kind of babyish and only used within very close relationships or in humorous situations. Some people may not use them just due to their personality. If you’re a bubbly guy or gal in a playful relationship with a Japanese native, throw one of these words in the mix and see what happens!

This is an old term originally used by samurai to refer to their vigilant employers/leaders. You’ll often hear samurai refer to others with this name ending attached for that reason.

Nowadays, although it is rather honorific, it is rarely used and still has a brandish tone. When used, it’s usually the work of senior employers speaking of someone in their business.

Please pull out the sword. … Samanosuke-dono

Okay, we know what you’re thinking – where the heck is くん (~kun) on this list!? Well, the thing is, while くん (~kun) is a term of endearment, it’s more so not! Let us explain.

We have seen situations where male figures in a family are referred to as ~kun by their relatives. In anime, くん (~kun) is probably the most popular honorific title used with males – you hear it all the time. But in reality, くん (~kun) represents one’s superiority over another.

It is rarely used with those with whom you are close, minus sometimes between male friends of the same age and status. And while it is more of a masculine term frequently used to address younger boys by their elders, it’s also used to address women at times. What’s important here is superiority.

For that reason, our beloved くん (~kun) shouldn’t be considered as a term of endearment for any tried and true Japanese student!

These “sweetening” terms are sometimes fused with a name, forming another now-cuter name altogether.

For example, the name ゆきこ (yukiko) may become ゆきちゃん (yuki chan) instead of ゆきこちゃん (yukiko chan). Perhaps the male name あきと (akito) gets shortened to あっくん (akkun) instead of あきとくん (akito kun). Just be aware so this fact so as not to get confused, o’ listener!

What do Japanese Couples Call Each Other?

Aside from the endearing name endings, some Japanese terms are used by couples to refer to one another in an adorable tone. These are endearments that you can use for your significant other. Like always, we’ll rate them from most common or prevalent downward.

Japanese people use the endearment あなた (anata). But wait… doesn’t あなた mean “you“!? Yes, it does – but that’s not its only meaning! Between couples (especially married couples), this word represents something more along the lines of “darling” or “dearest.” It’s kind of like an “oh, sweet you.”

For better or worse, Japanese men tend to be more reserved with their verbal emotions, so usually, wives are the ones who’ll use this term.

あなた (anata) has to be one of the most shifty words in Japanese since it can be both quite rude and really sweet simultaneously!

There are a few adopted Japanese terms of endearment, namely ダーリン (daarin) and ハニー (hanii) that we see floating around sometimes. These correspond to the English words “darling” and “honey,” in case you hadn’t guessed.

The thing is because these words are adopted from English, they just don’t carry the same affectionate weight as do the traditional terms of endearment. Maybe one day they will, but not now.

In truth, they tend to be humorous terms that poke at fun and are not taken quite as seriously. For that reason, they don’t make this list, but they are used sometimes, and you, as a young master, should be aware of that!

The last Japanese term of endearment would be the actual first name of whoever you’re addressing. We know – it’s a little weird (for Westerners especially) to think that simply calling someone’s name could signify closeness, but it is!

Not-so-close folks are almost always addressed by their last name alone or with the last name preceding the first.

Many times, particularly in the past few decades, close friends simply keep the ending ～さん(~san) and call one another by their first name, and that’s enough.

If you’re sure you’ve got a friend and you don’t feel too comfortable with name endings due to their fluidity, go with the first name + さん!

Just like in any other language, the Japanese language requires that terms of endearment are used with those who deserve them – close friends and family members. Calling your boss by nickname would be rude (in most cases, at least). And only old grannies get away with calling strangers “honey.”

Be well-established and certain of your mutual affection before referring to someone by a pet name in Japanese. This is an especially important tip to remember, considering how inclined language students are to mimic what they hear.

Of course, a native Japanese speaker will probably just giggle at your innocent mistakes, but they’ll be even more impressed at your language diligence! Until you develop a relationship, it’s best to just refer to people by their name + さん (san) rather than to address them with endearment.

Now you’ve learned the Japanese terms of endearment to show your love and affection to your significant other, family, or friends. You can say these along with “I love you” or other means to show you care.

Also, knowing Japanese words and phrases can add new depth to your language learning – especially if you’re learning the Japanese language to speak with your loved one. Apart from that, it’s also a fun way to expand your knowledge and develop your cultural understanding of Japan.

To back up your newly-learned sweet vocabulary, how about learning Japanese love phrases next?