In this lesson, we’ll learn about one of the foundations of all languages — Japanese verbs. Learning a new language means you definitely need to study verbs. Nouns are usually easy enough to learn, but Japanese verbs are often harder to master because of different verb conjugations and rules. 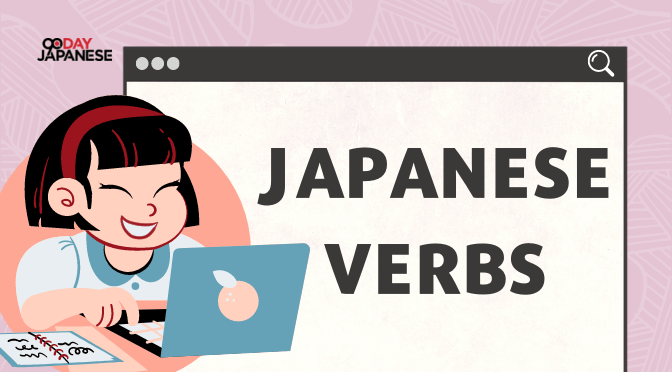 One of the most important parts of communication is verbs. Of course, we use verbs every single day to express our actions. Mastering the basic verb forms and simple verb conjugations is one of the first steps you can take in your language-learning journey.

Below, we’ll discuss the different verb types and verb conjugation patterns of the Japanese language then you can make example sentences by the end of this lesson!

The masu-form can be used in the present and future tense. It’s also the polite form or more formal way of speaking Japanese, and it is used when talking to your acquaintances, superiors, co-workers, and people you don’t know.

While there is a more casual short form, it’s best to start with the long form so you can have an easier understanding of how each verb conjugation pattern works.

The basic verb form of all Japanese verbs ends with “u”. This is also called dictionary form and is the informal, present affirmative form of the verb. It’s because that’s how you’ll look up a verb in a dictionary.

This form is used among close friends and family in informal situations. Japanese verbs always contain two parts: a verb stem and a suffix. When conjugating Japanese verbs, you’ll have to start with the verb stem so be sure you’re able to identify the stems of Japanese verbs.

Note: In Japanese grammar, the term “verb stem”, also known as “masu-form/stem” refers to the verb base and is used in a variety of phrases. When a verb is in its “masu-form”, the best approach to identify the verb stem is to delete the “masu”. In the table below, the dictionary form is on the left, and the masu-form is on the right.

Now that you know the basis of Japanese verbs, let’s separate them a bit further. Japanese verbs are split into three groups according to their plain form. Let’s go over the grammatical rules.

In the Japanese language, the verbs are grouped into three.

Each verb group has different conjugation patterns so it is very important to learn them.

When learning Japanese, conjugating verbs is significantly important, and memorizing the categories will be very helpful in improving fluency. You’ll notice how they differ. If we disregard the Japanese writing system, godan verbs have a consonant stem, but ichidan verbs have vowel stem ends. Now, let’s talk about the different groups. 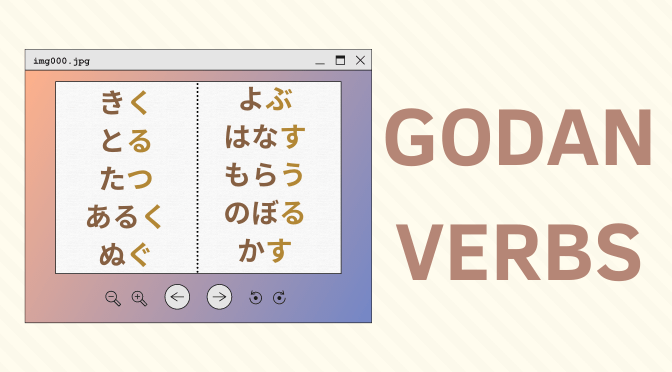 The first Japanese verb type is the u-verbs. The Japanese u-verbs are also known as Godan verbs. In written Japanese, you can see that each verb ends in the う-line on the hiragana chart when they’re in plain form, which is why they’re often referred to as u-verbs.

Remember the order of vowels in our previous lesson on Japanese vowels? They’re easy to remember because each vowel sound never changes! To refresh your memory, it’s あ、い、う、え、お. Godan means five steps in Japanese so it took its name “godan verb” from these five sounds.

For u-verbs, the stem sound determines the verb conjugation. Let’s take a look at the verb “kaku”.

The stem form of the verb kaku is kak and the suffix is u. To conjugate the verb, break the verb into its stem form and add “imasu” at the end. Now that you know how to conjugate u-verbs let’s take a look at some common u-verbs and their masu-form conjugations.

Tip: To give you a better idea, if you look at their masu-form, they all end with an i-sound if you omit the auxiliary verb “masu”. They usually end with い、ち、 り、 び、 み、 に、 き、or し. This is also one way to determine u-verbs or godan verbs. Looking at verb bases helps a lot in determining verb groups.

I want to drink coffee. 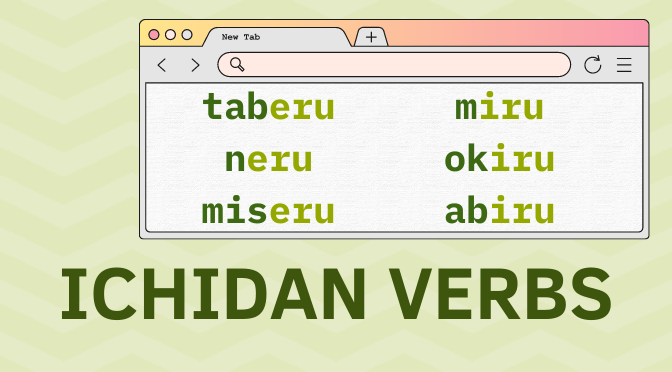 The second verb type is the ru-verbs. The Japanese ru-verbs are also known as Ichidan verbs. These verbs are the easiest to conjugate. To conjugate “ru-verbs” into the masu-form, drop the final “ru” verb ending in their dictionary form and simply add “masu”.

To conjugate into the negative form, simple past forms, and past negative, it’s the same way as conjugating godan verbs or u-verbs.

Tip: If you look at their verb base or masu-form, they all end with an e-sound if you omit “masu”. These verbs usually end with え、て、れ、べ、ね、め、け、げ、or せ. This is also one way to determine ichidan or ru verbs.

I forgot my wallet.

Today, I will go out. 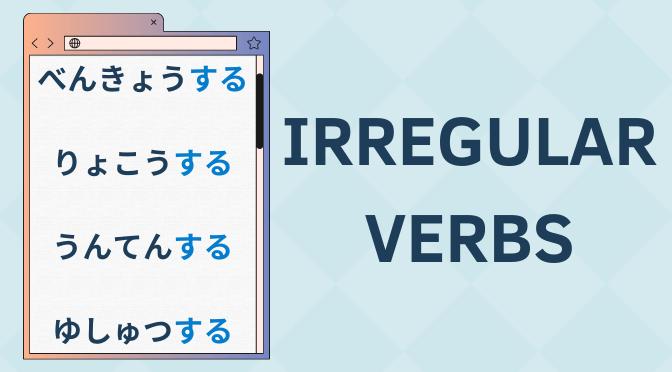 Finally, the third verb type is the irregular verb! There are always exceptions to every rule and Japanese verbs are no different. Luckily there are only two Japanese irregular verbs that you have to be careful of when conjugating; する (suru) and くる (kuru).

These two verbs don’t conjugate with any other verb but their conjugation rules aren’t difficult. する (suru) is the most common verb you’ll come across as it means “to do”. It’s often combined with many nouns to create a verb.

To conjugate する (suru), the “su” turns into “shi” and then add “masu” to the end. So it becomes します (shimasu). The past and negative form conjugations of する (suru) follow the same patterns as regular ru-verbs and u-verbs. Let’s look at the chart below.

The next irregular verb is くる (kuru) which means “to come” in English. When conjugating, the verb the stem of くる (kuru) is き (ki). Thus when changing to past or present tense, change くる (kuru) to き (ki) and add ます (masu) to the end. Let’s take a look at the chart below.

My friend will get married today.

We will take a walk in the park.

Here is a common Japanese verbs list that has verbs that you should know. Some of these verbs are essentially used every day so it’s important to learn them.

Japanese tenses are mainly made up of two tenses, unlike the English language. They’re the present tense and the past tense. Both tenses are expressed using verb conjugations.

This also means that in the Japanese language, there’s no conjugation for the future tense.  If you want to express an action in the future, you can use the present tense conjugations used for the different types of verbs.

The Japanese present tense of verbs can be expressed depending on the type of verb. You’ll use います (imasu) for Godan verbs while ます (masu) for Ichidan verbs.

ません (masen) on the other hand is used for both Godan and Ichidan verbs when negating the action in the present tense.

The Japanese past tense is expressed using ました (mashita). This can be used for both Godan and Ichidan verbs.

When negating a verb in the past tense, いませんでした (imasen deshita) is used for Godan verbs whileませのでした (masen deshita) for Ichidan verbs.

Japanese verbs don’t have a specific form or conjugation for the future tense. Instead, the Japanese future tense can be expressed using the present tense. 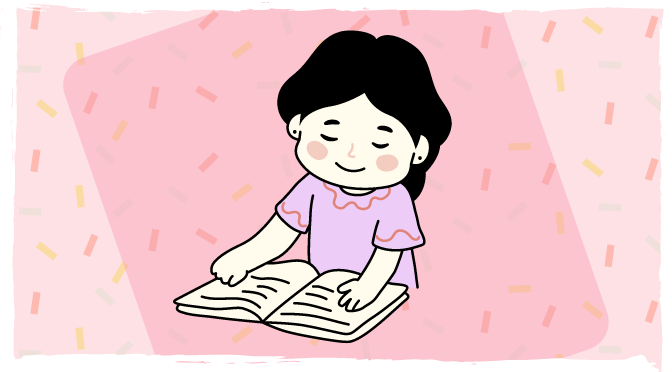 While these are the most common verbs, there are many verbs and many more conjugation forms out there to learn to express actions better. We haven’t talked about how to use a transitive verb. And the different forms of the verb — causative form, conditional form, imperative form, and potential form.

So be sure to check out our other articles to help you continue along your Japanese language journey.