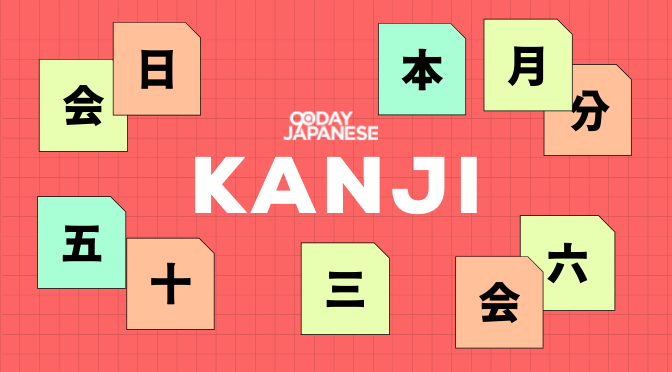 However, the Japanese writing and reading system could get a little perplexing. Well, the reason is pretty simple. There are just too many Kanji in Japanese. Just like the old quote by Sun Tzu; Know your enemy and know yourself. Need not fear the result of a hundred battles.

Over time, alphabets from China traveled far from home and developed in a certain way in surrounding countries, including Japan. The Japanese word Kanji (漢字 | かんじ）refers to the Chinese characters.

While it’s pronounced Hanji in Mandarin Chinese and Hanja in Korean using the same characters. The Kanji pronunciation, variation, and meaning of Kanji vary between countries.

Below is a Kanji character list that you can start with to make your language learning easier. We’ve included the onyomi and kunyomi pronunciation that are written in both romaji and hiragana.

Is there a Native Japanese Word in Modern Japanese?

The imported Chinese alphabets were helpful yet not sufficient to express everything in Japan. Therefore, some native Japanese words were born. It’s commonly seen among the name of plants and Japanese customs.

How Many Letters are in the Japanese Language?

Even though learning Hiragana and Katakana won’t be a big issue, you might find it quite challenging to memorize Kanji. But don’t worry, we will introduce you to some tips today.

Why do the Japanese use Kanji?

Together with Hiragana and Katakana, the knowledge of Kanji had become essential in the Japanese writing system and reading. There are reasons why the Japanese language has three types of characters.

Without the appropriate character use, it becomes hard to get the full context. We need to think about where a word starts and ends. Let’s look at the three different ways of writing the same sentence.

*The capital of France is Paris. The Eiffel Tower is famous in Paris.

When is the Best Moment to Start Learning Kanji?

If you’ve already mastered Hiragana and Katakana, it’s about time to concentrate on Kanji. You might feel that it’s a long way to go at first, but once you get the ideas of Kanji radicals, strokes, and pronunciations, you’ll be able to step up to the next stage. Many Japanese learners start by drilling Kanji using books and other media.

How to Learn Kanji?

Learning Kanji can be challenging, but we’ve listed down 5 helpful tips on how to make it easier. Check them out below!

Getting to know the basics of radicals will help you learn Kanji.

Kanji is like a word puzzle in one character. Every Kanji contains one or more 部首 (ぶしゅ | bushu | radicals), and each radical provides general meanings and pronunciations.

Getting to know the basics of strokes will be useful in learning this writing system. Like Hiragana and Katakana, there are certain rules to writing a Kanji.

In addition to writing Japanese characters readable and beautiful, stroke orders and stroke counts are keys to learning a Kanji. Also, the Kanji list by stroke count is a common feature in the dictionary.

Onyomi is also known as the Chinese reading. This is based on the original Chinese pronunciation of the characters.

If you already know Chinese, On-Yomi becomes a big help.

Onyomi pronunciation is commonly used when reading Kanji that are for compound words but not limited to it.

Kunyomi leads you to understand the meanings of Kanji. Also, the Kanji radical can be a guide to certain sounds and meanings.

Kunyomi pronunciation is used when reading singled-charactered Kanji and names of people and places. However, keep in mind that for English names or foreign names, the Katakana writing system is used.

How Many Kanji Characters are Necessary to Get By?

Elementary school students learn about 1,000 Kanji in six years and 1,100 more in the three years of middle school. Memorizing thousands of Kanji isn’t necessary to have conversations. Still, it’s good knowledge for getting around town freely and reading written Japanese.

Do you remember the time when you set your eyes on a Japanese character? Probably some of you had thought that it looked like a cipher and impossible to read. Learning Kanji by heart takes time and effort, but it certainly brings you to a new world.

Learning individual Kanji is fun, but exploring Kanji symbols and expanding knowledge to over 5,000 compound Kanji words (熟語 | じゅくご | jukugo | Kanji combinations) are also very enjoyable. You will find a beautiful or an interesting Kanji in no time!

2 replies to "Kanji – Learn The Japanese Version of Chinese Characters"