Knowing how to say “months” in Japanese is important for many reasons. From organizing a day out with friends in Japan to asking your coworkers when the next meeting is, or even speaking with a native Japanese person you just met, knowing the months of the year in Japanese is essential for daily conversations. 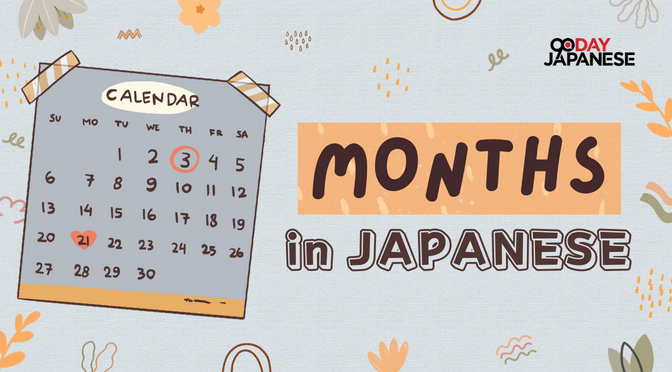 Japanese is a fun and challenging language to study, and learning the months of the year is much easier compared to other languages. All you need to know is one kanji and the first 12 numbers in the Japanese language. You’ve got this!

Months of the Year in Japanese

The Japanese months are called simply numbered from 1 to 12, followed by the kanji for month 月. This kanji character also means “moon” on its own.

If you want to learn Japanese first, you can head over to our handy guide that will walk you through the essentials of the Japanese writing systems – hiragana, katakana, and kanji. But if you’re ready to proceed, let’s head on to the list of Japanese months.

Below is the list of months in Japanese. Each month is listed with its English name, kanji, hiragana, and romaji. Becoming familiar with these will also help with your Japanese vocabulary and pronunciation.

How to write the date in Japanese

The History of the Japanese Calendar

Japan drew up its first calendar in the year 604, based on techniques developed in China that were brought to the islands of Japan via the Korean Peninsula.

Over the following centuries, seasonal events and observances filled out the traditional calendar of Japan. Months in the former calendar started when it was the new moon, while the full moon marked its halfway point.

The Japanese adopted the Gregorian calendar, which we are all used to using today, in 1873. However, many aspects of the Japanese traditional calendar are still used today, with many shrines and temples holding their annual festivals on traditional dates.

Traditions & Festivals Characterized by Each Month

The year in Japan is clearly characterized by the passing of the four seasons – spring, autumn, summer, and winter.

Learning Japanese is more than just the language. To get a deeper insight into Japanese culture and the mindset of the people, every Japanese language learner should understand how each month is culturally characterized by annual events and traditions – some ancient and some with more recent origins.

Here is a month-by-month overview of the most important events in the Japanese calendar.

The first month of the year is characterized by the most important event in Japan’s calendar, the Japanese New Year.

Typically, families will decorate their porch, or household shrine, don traditional Japanese clothing, eat ozōni and head out to a shrine or temple for hatsumōde, which means the first shrine visit of the year. It’s also common to rise early to watch the first sunrise of the year.

The second Monday of January is a national holiday, Coming of Age Day. On this date, cities and towns throughout the country hold a formal ceremony to which all the local 20-year-olds are invited.

Every February, Setsubun takes place. This usually lands around February 3rd or 4th. It is a day that marks the end of winter according to the ancient Japanese lunisolar calendar. People celebrate this day by scattering beans around the home as a means of warding off ill fortune while chanting oni wa soto, fuku wa uchi or “Out with demons! In with luck!”

Celebrated on the 3rd of March, Hinamatsuri is a time to celebrate girls and pray for their future health and happiness. Families will decorate their homes with dolls representing a Heian court wedding with the Emperor, Empress, and their musicians and attendants.

Travelers can enjoy these beautiful ornamental dolls in city halls, museums, and libraries across Japan during March.

April is famously characterized by the arrival of cherry blossoms. It is no exaggeration when we say that the Japanese are obsessed with these delicate pink flowers. From inspiring Heian poets and artists to even having sakura-themed drinks and dishes in cafes.

Many families will enjoy the transient beauty of these blossoms every April by holding a picnic under the cherry trees.

Children’s Day is celebrated on May 5th, and it is a time to give thanks for the healthy growth of young boys. Colorful carp streamers adorning the roofs of houses are a common sight around this time of the year. Inside the home, many families will display samurai figures, helmets, or armor to symbolize strength.

For the Japanese, June is the end of spring and the beginning of the rainy season. Many traditional festivals are held during this month with the aim of warding off epidemics and agricultural pests. Some of the most famous festivals during June are the Tenjin Matsuri in Osaka and the Gion Matsuri in Kyoto.

Tanabata takes place on July 7th. It is a festival with Chinese origins celebrating the meeting of the deities Orihime and Hikobishi. According to the legend, the Milky Way separates these lovers, and they are only able to meet once a year on the seventh day of the seventh lunar month of the lunisolar calendar.

People celebrate this day by writing wishes in the form of poetry on small colorful pieces of paper and hanging them on bamboo.

Obon is the Buddhist custom of paying tribute to the spirits of deceased relatives and ancestors. It is believed that these spirits return to their families on July 13th and return to the afterworld three days later, on the evening of July 16th.

Many families adorn their home shrines with special decorations and offerings and have a priest recite a sutra for them.

The month of August is the height of the summer season in Japan. Schools and offices throughout the country will take at least a week off for people to enjoy the hot summer days.

Many people spend their summer holidays going to the beach or going camping. August is also a lively time of the year as many festivals are held throughout temples and shrines in Japan.

September is known for Tsukimi, which literally means “moon viewing.” It is a time of the year to savor the beauty of the clear autumn evening skies illuminated by the full moon. In September, many castles, museums, and Japanese gardens will hold events in the evening, with concerts held outdoors playing traditional Japanese music.

October is the month of the Sports Festival, which is a huge event throughout Japan. The 1964 Tokyo Olympics actually started on October 10th that year, and years later, it was declared a national holiday.

Usually, around this date, many schools will hold a sports festival featuring track and field events, as well as dance performances. Some companies will sometimes organize their own sports festival every October to help foster stronger bonds among employees and their families.

Shichi-Go-San literally means “seven-five-three.” It’s an event that is celebrated on November 15th with children ages seven, five, or three dressed in their finest clothes and taken to visit shrines.

This custom is observed to give thanks for children’s health and growth and to pray for continuing good health. Japan is famous for its kawaii culture, but is there anything more adorable than children dressed up in traditional Japanese clothing? We don’t think so! It’s definitely something to look forward to every November.

For many, December marks the Christmas season, but for the Japanese, it is a time of the year to get together with workmates or old friends. Being the last month of the year, December is when Bōnenkai parties happen. These parties are literally aimed to “forget the year” or at least the hardships and challenges that came with it.

It’s one of the few times a year that social hierarchies and etiquette are set aside so that all in attendance can enjoy equal footing.

Useful Words Related to the Months of the Year in Japanese

Knowing the Japanese months will give you a huge boost in your studies, but you’ll likely come across these Japanese words in context, too!

Fun Facts about Months of the Year in Japanese

Blazed through this lesson about months in Japanese? Fantastic! Building your knowledge of basic Japanese vocabulary will create a solid foundation for your Japanese language skills. So, what should you cover next? We suggest advancing to the Japanese days of the week, or Numbers in Japanese. Keep going!