Seasons in Japanese – Things to know before your next visit

Today, we focus on the four seasons in Japanese and related vocabulary. If you’ve seen a Japanese movie or Japanese anime series before, you probably noticed that there are quite a few scenes that portray the season. 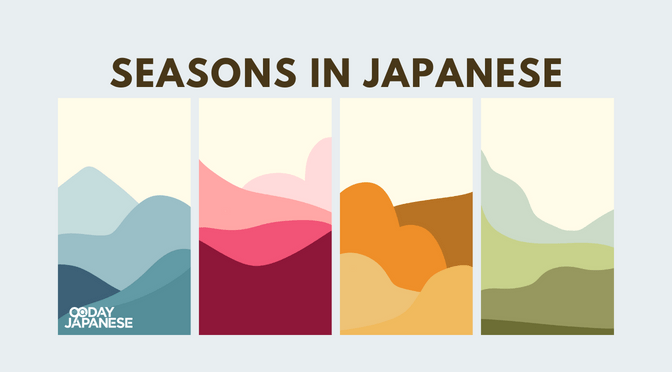 What are the seasons in Japan?

Just like in other countries, there are four seasons in Japan, namely, spring, summer, autumn, and winter.

Perhaps many consider the most popular season in Japan would be the spring season of dazzling cherry blossoms. Though the following summer season is also enchanting for its numerous summer festivals and fireworks.

Then, strikingly colorful autumn leaves come after with a surprise. The winter season offers you various winter sports activities or the spectacular view of the snow monsters in the snowy mountains.

Here are some example sentences that are related to the four seasons in Japanese:

What Each Season is like in Japan and Related Vocabulary

Let us now learn about the four seasons in Japan. As we mentioned above, each season has its own attraction. So, what are some exciting ways to spend each season? Let’s find out!

The Japanese word for “spring” is はる (haru | 春). Usually, spring in Japan starts from late March to May, and a wide range of flowers blossoms during the spring season. The flowery spring season is a symbol of a brand-new start in Japan.

The city of Tokyo might be the best place to visit for cherry blossom viewing, but Kyoto is just as beautiful. It takes about 2 hours from Tokyo to Kyoto by bullet train.

What’s typical during the spring season in Japan?

People gather to view picturesque flowers blooming while students go back to school and freshman enrolls in schools and companies. Cherry blossom is well-known, but Hitachi Seaside Park‘s sky blue nemophila and Kawachi Wisteria Garden‘s beautiful wisteria tunnels are also a must-see in Japan. Here’s a table with words related to spring:

The word for “summer” in Japanese is なつ (natsu | 夏). Japanese summer begins with a rainy period called Tsuyu, and hot and humid summer lasts from June to August. From July on, typhoons sometimes come close to Japan with severe rains and winds.

However, Tsuyu first ends in the southern islands and later in the northern region. Then starting in late July, the summer and fireworks festival season begins all over Japan. 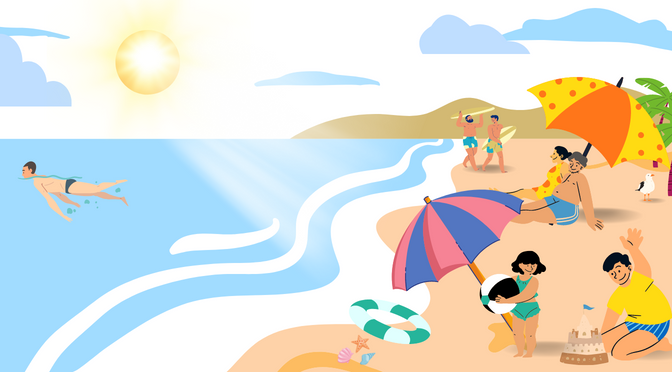 If you’re touring in Japan during summer, don’t miss the chance to witness the colorful and energetic festivals. Aomori’s Nebuta, Tokushima City’s Awa Odori, and Omagari’s National Fireworks Festival are popular with tourists.

As part of the Japanese culture, you may see people wearing the traditional yukata and kimono when they go to summer festivals. Kimonos are made from silk and are usually worn for formal events. Yukatas are generally made from cotton or polyester, and it’s also known as Japanese festival clothing. Here are some words that are related to summer:

The word for “autumn” in Japanese is called あき (aki | 秋). Autumn or fall in Japan is from September to November, and it’s often said to be one of the best seasons to travel to Japan for its stunning scenery and food.

What are the key features of autumn?

Japanese people often refer to autumn as a season of appetite, arts, sports, and excursions. Indeed, the autumn season has a wide range of ingredients and seasonal dishes one can only taste during this season. Plus, the stunning view when the leaves of the trees change to vibrant shades of red, orange, and yellow.

If you have a sweet tooth, do not miss Japanese sweets with chestnuts and persimmons. They are eye-catching and incredibly delicious. Below are some autumn-related words.

The Japanese word for “winter” is ふゆ (fuyu | 冬). Japanese winter generally lasts from December to February, and the temperatures and the climate vary from place to place. In winter, the southern region and the Pacific Ocean side mostly have mild and sunny days, but the northern and Sea of Japan side have cold and snowy days. 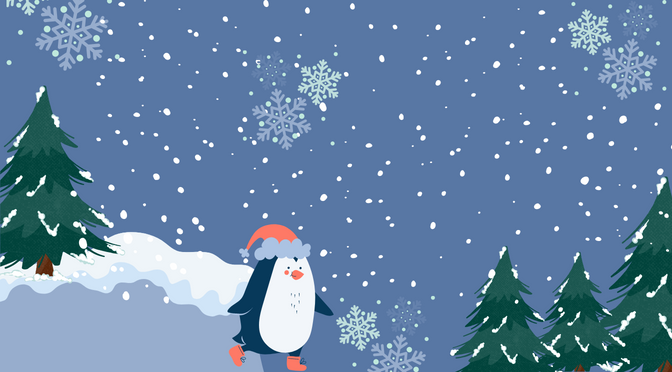 From Sapporo Snow Festival to Nagasaki’s Lantern Festival, there are numerous snow and winter festivals in Japan. No need to mention that the winter season is also a perfect period to bathe in hot springs to warm yourself up or enjoy snow sports. Japanese also love to go skiing, so you might want to check out some ski resorts. Here’s a list of winter-related words:

The word for “weather” in Japanese is てんき (tenki | 天気). This is one of the most useful discussion starters and an important topic in everyday life. Because there are several words related to Japanese weather, knowing how to talk about it in Japanese will improve both your vocabulary and communication skills in Japanese.

Below we’ve included some Japanese adjectives describing the weather:

When is the best season in Japan?

In Japan, each season has very characteristic sceneries and is rich in colors. I believe you won’t run out of things to do even if you stay for more than a week. The country offers a wide range of things to see and to do throughout the year, so whenever you have time to visit Japan is the best time!

And if you can, blog about your trip to Japan and share the country’s beauty with your loved ones! I’m sure there will be a lot to share.

Awesome! You’ve stayed till the end of today’s lesson about the four seasons in Japan. Time to speak to your Japanese friends and chat about what you’ve learned!

If you’re still up to knowing more about Japanese, how about learning some Japanese greetings?