Why learn Japanese – Reasons to learn the language

Have you ever stopped to ask yourself, “why learn Japanese anyway?” That kind of frustration is all but inevitable and perhaps something you’ve thought of midway through an exhausting lesson in Japanese grammar. And so, this is really a question worth answering! 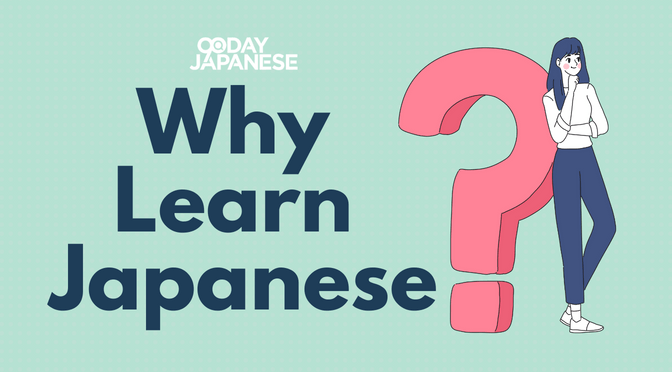 Why Learn Japanese? – Top 10 Reasons You Should Study Japanese

Perhaps you’re at the phase where you want to start something new, like learning Japanese, but you’re not quite sure if it’s worth the effort.

Most people who want to learn a foreign language choose those which are closer to their native language, as it can be easier to learn. This means English speakers typically choose European languages, which makes choosing Japanese a huge leap.

The most obvious reason for learning Japanese is that you’ll be able to forge a deeper connection to Japanese culture. Odds are that if you’re curious about the Japanese language, it began as a curiosity toward the culture in general. If you’re someone who’s usually interested in Asian cultures, or international culture in general, then this reason will surely motivate you.

Between the years 1603 and 1868, the Japanese empire endured a period of isolation known as さこく(sakoku|鎖国), which literally means “chained country.” This took place during the Edo Period in Japan.

Without a doubt, one of the reasons why Japanese culture is so peculiar and intriguing at a global level is due to this period where, for the most part, Japan developed without any outside influences. Cultural differences between Japan and other countries are easily noticeable too.

Patterns of thinking and movement will become clearer as one develops into the language. You will be able to resonate with the choice, considerations, and overall behavior of the Japanese people. You’ll get to know more about the common things in Japan, like etiquette, gestures, religious beliefs, and cultural practices.

Not to mention, the Japanese idea of humor (which is a huge part of any culture) will become more clear, enriching your beloved anime and manga, TV dramas, and radio shows. Learning (and ultimately knowing) a language enlivens one’s understanding of a culture 10-fold, and in some ways, without the language, the culture is missing!

Another reason why you should learn the Japanese language? The Japanese people!

Sure, the Japanese are open-minded and accepting for the most part, but they’d really appreciate it if you put forth that extra effort to communicate with them in their native language. Also, fortunately, there are plenty of Japanese natives who really want to practice and improve their English, so finding someone to practice with will be a cinch.

This is actually a guaranteed way to excel at your first benefit to learning Japanese listed above. There is no faster way to develop a cultural understanding of the Japanese language than through a native Japanese friend!

Last but not least, when you do make it to Japan, you’ll be able to get in on all the little secrets if you’re rolling with a Japanese buddy!

For example, some restaurants in Japan often have small giveaways or raffles. Not only can these offers be quite confusing to comprehend, but you also may not even be given the chance to participate as a foreigner! It’s not that the restauranteurs want to leave you out or anything, it’s just that some things are so cultured they assume you wouldn’t understand.

And for the most part, they’d be right. Usually, things like these have a host of unwritten rules that every local knows about and never needs to be explained.

In short, Japanese pals are great pals to have for students like us, so try to get some good ones.

For that reason, Japanese is a great stepping stone into some other Far East Asian languages and cultures. Korean often sounds like Japanese to the untrained ear. That’s because several Korean words and overall pronunciations are indeed similar to that of Japanese. It’s actually one of the main reasons why people learn Korean, but on the flipside!

While Chinese sounds pretty different than the Japanese language, the writing system has a lot in common. As you learn かんじ (kanji|漢字) and get better at reading Japanese, you will learn how to read several things in Chinese by default!

Japan has a huge economy (more on that later), and the average family is pretty well off. Every year Japan spends billions on consumer goods. To boot, their import/export industry is one of the biggest in the world, including the export of people as tourists to other places.

Knowing any second language is great, but Japanese is one of the best. Any business dealing with foreigners, like a tour guide agency or a multinational corporation, will see a huge advantage in a multi-lingual employee. Of course, the same goes for tackling the incredibly challenging market of coherent and functional translation!

If you’re studying in Japan or thinking of working for a Japanese company after your Japanese studies, that is reason enough for learning Japanese.

Japanese is thought to be hard, although it’s not as hard as you think! But it does have its challenges, which are a great thing if you think of all the exercise your brain gets from studying!

Several studies have supported the fact that cognitive abilities and brain function increases from studying a foreign language. Things like the power of memory, the ability to multitask, and improved observation have all been reported as a cause of language learning.

So do your brain a favor and get some needed exercise – learn Japanese!

To be more specific, the Japanese Economy is the second-largest developed economy in the world and the third-largest economy by nominal GDP! That means that Japanese-run businesses and companies have made their name in the world, and successfully so at that.

So if you’re gunning to get into the fields of economics, engineering, R&D, technology, and a load of other things, chances are you’ll be working alongside or underneath the Japanese.

That being said, there must be something to their madness! Why not master the language, talk to some Japanese financial guru and find out?

For such a small country, the Japanese sure do get around – especially on the internet! In fact, Japanese is the third most widely used language on the net, after English and Chinese. That’s pretty impressive for people who make up not even 2% of the global population!

Due to such a large online community and the prevalence of the internet itself, it is in your best interest to learn Japanese for the sake of connecting with more people online.

Not only do you get access to millions of potential helpful acquaintances, but you also get access to thousands of interesting and beneficial sites, like job searching or education. Test your luck by searching for something cool online in Japanese and see what you come up with!

This reason will be especially useful for anyone living in Japan and seeking even more reasons to learn Japanese! Karaoke, or カラオケ as it is termed in Japanese, is one of the most popular past times for young natives. It’s definitely something that your friends will want to do at some point–it may even be a regular routine.

In such a case, actually knowing Japanese is a make-or-break variable! Plus, the more you participate, the more you learn through song. It’s a perfect way to get into the groove of the culture and is one of the fun reasons to learn Japanese.

Japan is one of the most technologically advanced nations on the planet. We’ve all heard of the Panasonics, Sonys, Mitsubishis, Nintendos, et cetera. Here is a place with outstanding developments in optical media, industrial robotics, semiconductor manufacturing, fermentation processes, and mechanical engineering, to name a few.

Japan’s drive for innovation and improvement has made them the number one country on the planet for annual patent filings, with hundreds of thousands of application attempts every year!

And we’re not just talking about modern technology – Japan has an outstanding list of ancient technologies that have withstood the test of time and is still around today. It is by far the leading country on the globe when it comes to the number of companies that are hundreds of years old.

Finally, you should learn Japanese to conquer your own goal of besting this language! Most of our readers are currently in the process of becoming masters of the Japanese language – and that road is paved with one goal at a time!

Or what about those benchmark goals, like the desire to understand your favorite anime shows better, to make lifelong friends, or search for job opportunities in a company? Committing to remaining a Japanese student will build a bridge to accomplish those goals, and that’s reason enough to learn the language!

Oh, and if you’re curious about the best way to learn Japanese so that you don’t waste any time, check out our article on the subject.

Why the Japanese Language is Important

As the great Japanese linguist Haruhiko Kindaichi writes, “languages reflect national character.” With just over 125 million people who speak Japanese around the world, it’s incredible how much such few have been able to achieve on a massive scale!

The Japanese belief in what is known as ことだま(kotodama|言霊), or “the spirit of the word,” mirrors this fact, and it shows in not only Japanese culture but Japanese accomplishments as well.

Why is Japanese Hard to Learn?

Hiding within this inspirational list lies the implicit concern every student has thought about at some point – why is Japanese hard to learn?

While we do beg to differ that Japanese is as difficult as it’s made out to be, we understand the challenge too.

The structure of sentence composition in Japanese is practically the opposite of what it is in English. That means that as a student of Japanese who is primarily an English speaker (amongst other languages), you must train your brain to think in reverse to approach Japanese fluency. That sounds really scary… but don’t underestimate the brain!

That’s perhaps the biggest overall challenge, especially for new learners. On top of that, Japanese is pretty grammar-heavy, and even more grammar-heavy when using business terms or honorific speech, which is known generally as けいご (keigo|敬語).

Finally, the vast use of かんじ (kanji | 漢字), or Chinese characters, in Japanese takes time, patience, and dedication to master. Even natives learn numerous kanji over a matter of years!

So those are the biggest reasons why Japanese is hard to learn–or so it seems. In actuality, learning Japanese can be as hard as you make it, and it all depends on your goals and learning discipline. Overall, we think the benefits of learning Japanese far outweigh the losses!

Recap – Is It Worth Learning Japanese?

Yes. You should totally learn Japanese. Become one of the Japanese speakers who can impress your friends by reciting Japanese poetry and then convince them to learn Japanese too.

After all, learning Japanese doesn’t only mean speaking the language but also immersing in its culture. If you visit Japan, you’ll get to appreciate anything related to the country even more, from reading the menu, riding bullet trains, sushi bars, martial arts, and even Hello Kitty!

Studying Japanese will open you up to a new world and expand your horizons, both inwardly and outwardly. It’s a win-win situation!